For all the posts regarding this movie, go here.

Stars: 5 / 5
Recommendation: A healthy rivalry can turn to a beautiful romance when the world wide web is involved. A must see love story with interesting elements like internet, chatting, competition and realization.

You've Got Mail is a 1998 American romantic-comedy film based on the 1937 Hungarian play Parfumerie by Miklós László and its adaptations. This was the third movie that had Tom Hanks and Meg Ryan as the lead actors. I have seen this movie so many times I cant even begin to count. And I have also posted about this movie three times before. (Post 1; Post 2 and Post 3) So it is fitting that I do a post of this movie for my theme of reviews for this year. **Wicked Grin** 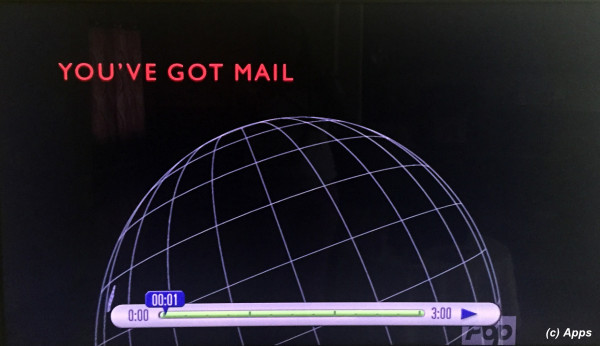 A battle of wits and charm between two book store owners mixed with love, internet and strategy makes this cute movie. Kathleen Kelly (portrayed by Meg Ryan) runs the independent store "The Shop Around The Corner" that her mother ran before her; with her assistants George, Aunt Birdie and Christina. Joe Fox (portrayed by Tom Hanks) is overseeing the opening of his new book store Fox Books, in upper west Manhattan. Both of their lives cross each other every day - same place where they shop groceries, have coffee or take a walk. Yet, they never meet each other until one day Joe walks into her book store with his eleven-year-old aunt Annabel and four-year-old half brother Matthew. Although Joe doesn’t tell her who he really was, they find a spark of attraction. Which withers away when Joe and Kathleen meet again at a party and Kathleen realizes who Joe indeed was - Owner of Fox Books, the company that would eventually force the small shops to close.

However, unbeknown to each other, Joe and Kathleen have been communicating online via their screen names NY152 and Shopgirl and slowly start falling for each other. Eventually they decide to meet but Joe sees Kathleen and doesn’t meet her as NY152 but as Joe himself. The story then follows them in how they despite hating each other start liking just like how they had liked their personalities on online chat; how Joe wheedles his way into Kathleen's life and wins her over eventually even though he caused her shop to be closed.

A very cute and memorable movie for me that highlights the life in the beginnings of internet taking over the art of writing letters and moving into online conversation, yet retains the art of talking in-person. There are so many little things in the movie that I cant begin to write and had captured my heart thoroughly. A few highlighted below.
( Collapse )
Joe Fox: Don't cry, Shopgirl. Don't cry.
Kathleen Kelly: I wanted it to be you. I wanted it to be you so badly

Trivia: (Picked from online)
a) When Kathleen is decorating her shop's Christmas tree, she places an ornament of Dorothy's ruby slippers from The Wizard of Oz (1939). Judy Garland, who played Dorothy Gale in the Wizard of Oz, also played the main character in In the Good Old Summertime (1949), which like You've Got Mail was based on The Shop Around the Corner (1940).
b) The original source material for this plot, the 1937 play "Illatszertár" (in English, titled "Parfumerie") by the Hungarian writer Miklós László, has been adapted into numerous other movies and plays. The first film adaptation was The Shop Around the Corner (1940) starring Margaret Sullavan and James Stewart. A movie for another day to post.
c) The song at the end of the film when they are standing on the bridge is "Somewhere Over the Rainbow". A clip of this song is played in the previous movie with Meg Ryan and Tom Hanks, Sleepless in Seattle (1993).
Collapse