Movie Critique #350: Somewhere in the Night

Stars: 4.5 / 5
Recommendation: Amnesia added to a murder mystery always keeps one awake long after the film is done. This is one such gem worth watching again and again.

Somewhere in the Night is a 1946 American film noir psychological thriller. A few months ago this film was being aired on Turner Classic Movies channel and it's synopsis reminded me of the first film in the Jason Bourne series - the 2002 film The Bourne Identity. Hence I ended up watching this movie and thus my review. 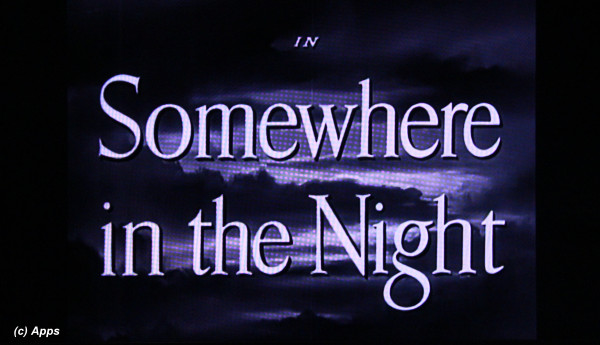 The plot follows the story of George W. Taylor (portrayed by John Hodiak) who returns home injured after fighting in World War II. In the process he loses his memory and doesn’t even remember who he was. All signs lead to him being a George Taylor but he doesn't seem to think he was one. Thus begins his quest for finding about himself, about George Taylor, about what happened to him and about his past. The only clues he gets are the ones left by a mysterious Mr. Larry Cravat. Who is this Larry Cravat? What does George find about himself? Is he indeed George?

Well-made murder mystery and thriller combo that has some nail biting scenes as well as funny bone ones. This is the second film directed by Joseph L. Mankiewicz who went on to win two academy awards each (for Best Director and Best Writing, Screenplay) later for two of his films - 1949 A Letter to Three Wives and 1950 All About Eve. One can see the beginnings of becoming a famous director in this film. Not a single frame was boring or confusing or unnecessary for the plot.

Another chilling and entertaining thriller to keep you glued to your seat.

1) A radio version of the film was broadcast on Lux Radio Theater on March 3rd, 1947. It starred John Hodiak reprises his role and Lynn Bari joins him in the lead roles.
2) The film is based on the original unpublished story "The Lonely Journey" by Marvin Borowsky.
3) How interesting that it cost only $13.60 for storing a package at a storage facility for three years and seven months. Seventy years later this cost would perhaps be $170 per inflation calculator but could be more based on the rates of the storage facility as well as what is being stored. Dollar certainly inflated.
4) The gunshots shown in the film look exactly like firecrackers. Perhaps they did use firecrackers then…:P
5) I wondered why the lead character Nancy Guild looked like some of her contemporary actresses Lauren Bacall, Lana Turner or Rita Hayworth. Then later I found that she had signed a seven year contract with 20th Century Fox with this film - her debut film. Fox had intended to have her as the Warner Brother's sultry actress Lauren Bacall. I havent watched other movies of Nancy Guild but it is mentioned that she wasn’t as much successful. I see why. Her acting and looks are so similar to her contemporaries and nothing stood out for her to be different. Perhaps that was why she wasn’t as successful.
6) One of the characters, Phyllis, uses some complex words that I haven't heard them being used in modern speaking English as such:
a. Gauche - lacking ease or grace
b. Fachee - French word meaning sorry
Tags: critique by amateur, movies, reviews
Subscribe