For review of all books in this series: Go here.

An Author's Odyssey is the fifth installment in the Land of Stories series by Chris Colfer published in July of 2016. The books in this series follow the lives of twins - Alex and Connor Bailey as they enter the fairy tale world from real world only to discover that there is more to both these worlds that meets one's eye. This fifth book starts where the previous book Beyond The Kingdoms (My review of that book here). 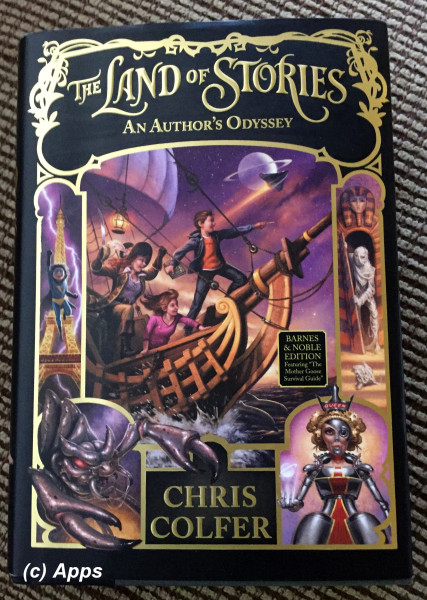 Alex and Connor who were trapped in separate worlds; literature worlds to be precise; by The Masked Man, when they come back to the fairy tale land realize that Lloyd had already sent armies to destroy all the fairy tale kingdoms. But they leave to their home back in the real world  - The Otherworld - for more manpower who can help them fight The Masked Man. Fairy Council has been turned to stone and no one knows what their fate would be. Charlie – Queen Red Riding Hood’s fiancée – has been taken by evil monster, Morina, who traps Charlie inside a magic mirror. This is where the fifth book begins.

Alex and Connor Bailey come back to The Otherwrold – real world -  to get the short stories that Alex had written when he was in sixth grade – almost three years ago. Connor’s plan was to go into his stories and bring the heroes from those stories back to Fairy-Tale World and fight The Masked Man. Meanwhile in The Fairy-Tale World, The Masked Man had unleashed his literary villains – The Wicked Witch of the West and her armies of Winkies and Flying Monkeys, The Queen of Hearts and her Card Soldiers, Captain Hook and his band of Pirates -  on the different Kingdoms to wreak havoc and then eventually combining it into one big land ruled by The Masked Man and his Literary Army. And Jack and Goldilocks save the former kings and queens of the different kingdoms at the last minute from being executed by The Masked Man.  With all that is going will Connor and Alex be successful in recruiting their heroes? What other tricks does The Masked Man has up his sleeve? What is the fate of Charlie? This is what follows the rest of the plot.

As always Connor comes off a bit unprepared and overconfident while Alex comes off as impulsive. If only author Chris had made Connor a bit more well-planned instead of petulant and stubborn which I have been waiting to see happen since the first time Connor  was introduced in The Wishing Well (My review of the book here). Well, what can we expect from 15 year old kids, perhaps they are in their natural mode. But come on it’s the fifth book and the kid has to realize that he does make mistakes when he plans something on his own and need his sister’s help. Are you hearing us, Chris?

However as the siblings travel through Connor stories they not only gather man-power but also learn more about themselves. I liked that Chris incorporated this in the plot by making Connor's stories much more palpable.

It can’t be helped but thought if the stories written by Connor and that he and his sister travel into could be actual stories that Chris Colfer himself might have written them as a kid. No he simply used those into this Land of Stories plot. A question I would love to get an answer for if I ever meet Chris Colfer in person.

Since The Masked Man had already taken all the literary villains, it stands to be that Alex and Connor Bailey have to take help of external sources to fight him. This is where I liked what the author Chris Colfer has done with the plot – making Connor the author of his own army, making them come alive to fight The Masked Man. Brilliant move I would say for one need to fight with equal or more wit than your opponent to win in the end.

Although Chris managed to bring all the characters together both from Connor's stories and the fairy-tale world, in some parts it gets really chaotic and confusing when the readers are taken between worlds. Perhaps it would be a bit too much for children to grasp what's going on.

A tad bit on the darker side the fairy-tales take on a shade that is not normal for a children's book. Yet it keeps you glued to it and compelled to finish it. Now I am ever more curious to read the next book in the series and see how Connor and Alex fare against this fight to save both the worlds.

1) Chris also mentions the movie 1984…recently I came across this in a different book too. I have to now definitely watch this movie.
2) Chris Colfer quotes lines from a boy band song that I could not relate to at all neither I could find it anywhere. Wonder what or who’s song it was.
3) Chris gives a new spin to how the Enchantress had turned cruel. Don’t forget he even gave her a name – Ezmia.
4) Connor talks about Goldilocks Zone when he and Alex travel to his second short story – Galaxy Queen. I thought the author Chris made this up and named it after Goldilocks again. But in reality there is indeed a Goldilocks Zone is space that scientist have named it so where a planet is that right distance from its home star so it is neither too cold nor too hot, like Earth and Sun. More about it here.
5) The story of Connor titled Galaxy Queen reminded me a lot of Star Wars. Wouldn’t be surprising if Chris took inspiration from that series.
a. And that is firmed up more when Connor uses the quote "May the cosmos smile upon you." cementing the fact that Chris is inspired from the Star Wars series.
6) In story titled The Ziblings, Connor has the robbers called as The Rat Pack - Frank, Sammy, Dean, Joey and Peter. Another inspiration Chris takes from the real Rat Pack including the names. Perhaps Chris when he wrote this story originally must have heard about Rat Pack and thought to use it as a pun here. :)
7) Connor's story about "The Adventures of Blimp Boy" resembles very closely to Indiana Jones and his adventures. Even the part that Connor travels to is very similar to Indiana Jones and Temple of Doom plot.
8) Emmerich and Bree both travel to the fairy-land through the portal that takes the Grande Army to travel 300 years, but they take it in 30 days because they must have fairy blood in them just like Alex and Connor – Book III A Grimm Warning. Finally in this plot we get some of the questions answered as to how they have fairy blood:
a. Bree is a descendant of Grimm Brothers who had Mother Goose’s blood in it giving her ability to travel through portals to the fairy-tale land.
b. Emmerich is the son of Bo Peep and The Masked Man aka Lloyd (Alex and Connor’s uncle). And Bo Peep was the one who helps the escape of The Masked Man. Did Bo know the truth about who The Masked Man was? <check the Book III again to see if it was Bo Peep who helped The Masked Man
9) When The Fairy Godmother meets Hans in the beginning of the previous book (Book IV), he was stuck on a chapter of his famous book The Story of a Mother. I have to read this someday. Another one for my blog post.
10) Goldilocks is pregnant, Hope and Ash - Queen Cinderella and Snow White's daughters - so intriguing to see the young characters of our fairy tales that we know, growing up.
11) Red keeps calling Shakespeare as Shakyfruit all though the series. I do hope she learns to call him right eventually.
12) Cinderella's step sisters and step mother who had gone to the Otherworld in the previous book (Book III), are shown to be owning and running a diner named "Storybook Grill".
Tags: books, critique by amateur, land of stories, reviews
Subscribe