For review of all books in this series: Go here

Stars: 3 / 5
My Recommendation: Despite the flaws it is an interesting read if you care to overlook them.

As promised I continued with the series and here is my take on the next one.

City of Fallen Angels is the fourth installment in The Mortal Instruments series, an urban fantasy by Cassandra Clare published in April of 2011. The novel is set in modern day New York but in an alternate world where humans, vampires, werewolves, magical fey, demons and shadow hunters co-exist. The plot begins a few months after The Mortal War against Valentine Morgenstern ends. 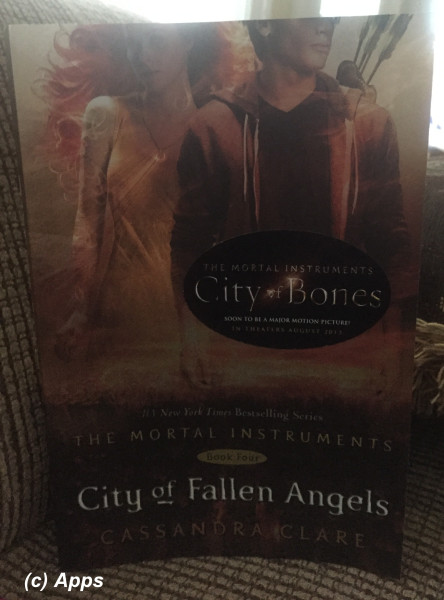 In the previous book, City of Glass (My review of the book here) - Jace and Clary along with the rest of the Shadowhunters and Simon - the Daylighter - had gone to Idris to get a remedy for Jocelyn to wake up. Valentine closely follows them for the third Mortal Instrument - The Mirror. Jace and Clary face their own share of mishaps along with their struggle to forget the forbidden love. In the end they successfully unite the Shadowhunters and Downworlders - The Fair Folk, Werevolves, Warlocks and Vampires - to fight against Valentine Morgenstern and his son Jonathan "Sebastian" Morgensten. Jace kills Sebastian but Valentine kills Jace in a rage and uses his blood to raise the Angel Raziel. But the angel kills Valentine knowing his true intentions. Angel Raziel brings Jace back for Clary. Jace and Clary find out that they are not brother and sister finally releasing Jace and Clary of incest. Phew! Simon gets the Mark of Cain – Clary puts it to protect him from Raphael and his hidden intentions.

Cassandra had neatly tucked everyone in their corners and given a closure with that. But as we see she did not end it there and proceeds to continue with the story of Jace, Clary and Simon back in New York. Clary is back in New York with Jace and other Shadwohunters getting trained at The Institute – pleased that finally she could call Jace her boyfriend. However Jace is hiding a secret very deep and dark from Clary and everyone. While Simon is being pulled in every direction where everyone wants a piece of him since he is both a Daylighter as well as carries the Mark of Cain. How will Jace, Clary and Simon together face new challenges is what the rest of the books is about.

As I suspected the series was supposed to end with the third book – City of Glass. However per Wiki and Cassandra’s blog, she had extended this series into a second trilogy. And if we follow the path that Cassandra is taking, the first trilogy had Clary, Jace along with their Shadowhunters and Downworlder friends battling against Valentine Morgenstern – Clary’s father; it makes sense that the second trilogy would be their battle against Valentine’s son Jonathan(Sebastian) Morgenstern – and Clary’s brother. Almost gives the series a Star Wars feeling – the movie series that comes on in three parts always.

Cassandra focuses most of her plot on Simon Lewis – the Daylighter Vampire – while Clary and Jace becoming sub-plots, giving Simon a more evolved character. However the story still revolves around Jace and Clary. Again Cassandra refers quite a few time to India and things / people etc. from India. Very pleased to read about that. Although is it Clave or Conclave? Cassandra seems to use both the words to represent the same thing. I don’t remember if she had some kind of expansion or differences between them in the first place.

What bothered me most about this book was that it was all over the place running from one end to the other. The order of sequence or the flow of the plot that was there in the previous three books lacked in here. The other thing what lacked was the presence of adult Shadowhunters – they completely seemed side-lined. After seeing what someone like Valentine could do and after knowing what these young Shadowhunters can bring to the table I am surprised to see that Cassandra made them work in two different silos. Would have been perhaps a better plot if they had worked together.

The title of the book made much less sense to me in connecting it to the plot as well. I wonder what Cassandra had originally titled this book. It felt like I was back in the mode of City of Bones where I literally ran through the book just to finish it the first time around I read it. Although the feeling is same with this book, this time around I will give the benefit of doubt to the remaining two books before I shrug them off, cause City of Glass was a very very good one. Plus the characters are now much more  evolved and better to read about.
All in all another book that you can perhaps fast-read and still not miss anything.

1) Again this book is written in different parts with each part titled and having a meaning of its own.
a. Part I is titled “Exterminating Angels” followed with a quote from Jeremy Taylor’s A Funeral Sermon. I looked to see who this Jeremy Taylor was and found a Wiki page about a cleric in Church of England in the 1600s. However I couldn’t find anything on his book or poem titled “A Funeral Sermon”. Perhaps this is another Jeremy Taylor Cassandra was quoting. However, more about this guy I found here.
b. Part II is titled "For Every Life" followed by a quote from Ted Hughes "The Tiger's Bones". And the lines Cassandra picks are so deep and so full of meaning albeit comes off as cruel, they are very profound.

2) Sub-Plots: Like any book or series, Cassandra also has several sub-plots and small plots that make us want to know what is going on with the other characters as well, and wonder if they become main plots of their own. A few that intrigued me so far are:
a. Magnus had wanted The Book Of White very badly in the third book - City of Glass. Why did he want it? Was he going to turn Alec immortal with a spell? Or was he going to look for a spell that would turn him into a mortal?
b. Simon finally seemed to find someone who could overpower his affection for Clary - Isabelle. I wonder if Cassandra explores this further in the next book or will it be just for this plot.
c. Now that Jordan Kyle is revealed to be Maia’s ex-boyfriend – who originally had converted Maia to a werewolf – would Cassandra make them a pair eventually?
d. What are the old ties between Herondales and the Silent Brothers?
e. Camille Belcourt and Magnus Bane had been lovers a long time ago – 130 years ago. Magnus seem to have been interested in a boy then named Will Herondale who looked like Alec.
i. What is the past in Magnus that haunts him?
ii. Is this part of Cassandra’s pervious trilogy The Infernal Trilogy plots?
iii. Is Will Herondale – connected to the Inquisitor Imogen Herondale obviously – tied in somehow with either of the series’ plots?

3) Other books, TV Shows and movies author mentions in the plot:
a. Jace quote “L'amor che move il sole e l'altre stele” meaning “Love is the most powerful force in the world. That love can do anything.” This is the last verse Paradiso and Divine Comedy by Dante Alighieri. More about the quote here.
b. Luke reads out the quote etched on the doors of the Silent City where they kept the dead - Taceant colloquia; Effugiat risus. His locus est ubi mors gaudet succurrere vitae -  meaning "Let conversation cease, let laughter flee. This is the place where death delights to help the living."
c. Jace quotes Shakespeare again. This time from Hamlet - "I could be bounded in a nutshell and count myself a king of infinite space, were it not that I have bad dreams."
d. Cassandra picks the wedding ritual of Shadowhunters from The Song of Solomon - Set me as a seal upon thine heart, as a seal upon thine arm: for love is strong as death.
e.  Jace quotes Hamlet again with this: to sleep, perchance to dream. A single statement that shows his entire trauma that he was going through. Brilliantly quoted by Cassandra.
f. A quote by Wallace Stevens was used by Cassandra - Death is the mother of beauty.
4) Places we visit along with Clary through this journey:
a. Veselka – a 24 hr Ukranian restaurant in New York City’s East Village. More about the restaurant here.
b. Cloister Café – another café in East Village, New York.

5) Now that Simon as the Mark of Cain, how will this impact him, what does it mean for him is something we have to watch out for in Cassandra’s future books.
6) Although Sebastian is killed by Jace, they don’t find his body later. Cassandra has left this small opening for a future book in which we will definitely see Sebastian coming back. As for me I do think he will come back since no evil can be snuffed that easily. Wondering if it would be a battle between Jace and Sebastian or Clary and Sebastian or both Jace and Clary against Sebastian. One has to wait and read to know the outcome. Quite an interesting one it would be.

7) Clary's Sights: Several scenes in the series described clearly shows that Clary had acquired the power of "Sight". However I have a feeling that we will be seeing these scenes either in the book the sights are seen or future books in the series. I am curious to see if they come true.
a. From Book I "City of Bones":
i. In a scene, Clary dreams of Jocelyn, Luke, Jace, Simon and Isabelle in various situations and positions . Here is what she sees:
1) Jocelyn in a hospital bed with eyes like bruises on her face.
2) Luke standing atop a pile of bones.
3) Jace with white feathered wings on his back.
4) Isabelle sitting naked with her whip curling around her.
5) Simon with crosses burned into his palm.
6) Angels falling from the sky and burning. This particular sight reminded me of Nalini Singh's Archangel's Legion - sixth book in The Guild Hunter Series. That plot focuses around incident called The Falling where angels fall from the sky and die. Although Nalini Singh's book was published in 2013, a good 6 years after this Cassandra Clare's book was published. My review of that book can be found here.
ii. She sees a vision where she is in the Glass City with Simon and Jace, and something about Simon that I want to see if it is what I think it is. (Described in Pg. 120)
b. From Book II "City of Ashes":
i. She has a vision in which her mother draws a protective Rune on her, which she finds it etched on her skin when she wakes up. This vision definitely becomes true…waiting for the other visions to come out for real for Clary.
ii. She sees another visions in which she sees Jace hurled from sky with golden wings at his back and another dark-haired boy with dark wings tipped with blood. Could that be Simon? Did it mean she was seeing Simon turning into Vampire and relating it to the blood on the wings? Curious to see what this vision might mean eventually.
c. From Book III "City of Glass": Clary has some sights in this part too:
i. She has visions of new runes
d. From Book IV "City of Fallen Angels":
i. Jace has dreams of murdering Clary instead.
ii. Clary sees new rune in her vision that can make dead speak.
Tags: books, critique by amateur, mortal instruments, reviews
Subscribe