For review of all books in this series: Go here

Stars: 3.5 / 5
My Recommendation: Finally the books and characters start connecting making a lot more sense and giving it a sense of completeness for the reader to enjoy.

As promised I continued with the series and here is my take on the next one.

City of Glass is the third book in The Mortal Instruments series by Cassandra Clare published in 2009. The novel is set in modern day New York but in an alternate world where humans, vampires, werewolves, magical fey, demons and shadow hunters co-exist. It begins where City of Ashes, the second book in the series, leaves off. 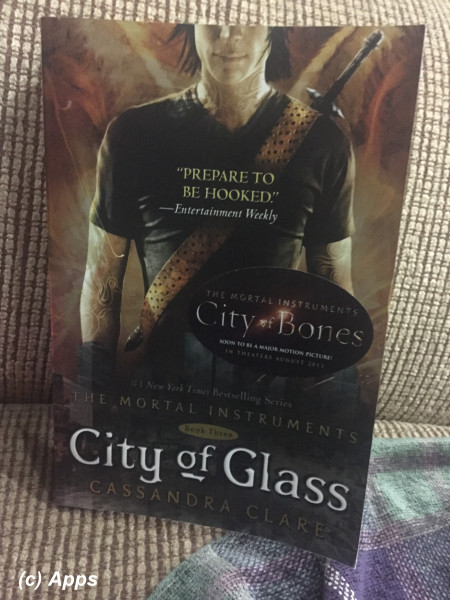 In the second book City of Ashes (My review can be found here), Jace comes under the investigation of Inquisitor Herondale, suspected for being in cohorts with his father, Valentine. Clary is confused and pulled between Jace and Simon even though she knows her love towards Jace is unacceptable. Valentine steals the Soul-Sword, The Maellartach, burns the Bone City of the Silent Brothers, to perform The Ritual of Infernal Conversion. While Simon gets turned to a vampire which puts him in direct line with Valentine. Clary and Jace wake up new powers within them. The book ends with The Inquisitor sharing a riddle with Jace that is more cryptic than he could imagine while Simon becomes a daylighter - a Vampire who can walk in the sun - and Jace accepts his role as brother to Clary breaking her heart again. And now my take on the next book in the series.

After coming to terms with Jace's decision, the one thing that Clary wants to concentrate is in waking up her mother - Jocelyn. For this she heads to Idris – home to all Shadowhunters - to get help from other Shadowhunters. However an unexpected attack on The Institute forces Jace and The Lightwoods to go to Idris via the portal without Clary as planned. An injured Simon gets pulled in through the portal as well. An enraged Clary creates her own portal to enter the Idris and draws Luke in with her. Jace and The Lightwoods come under the sight of The Guard with regards to Simon at Alicante. While Clary and Luke since land elsewhere but closer to Idris, walk on foot to their destination and the person who can help them. Valentine also reaches Alicante in search of the Third Mortal Instrument - The Mirror. The rest of the drama unfolds in Alicante with keeping the reader on edge at every turn of the page.

Cassandra introduces a few more new characters, obviously expected - Sebastian Verlac and his cousin Aline Penhallow and new Inquisitor Aldertree, Amatis. But irrespective of how many characters are involved, Cassandra doesn’t wear off from the traditional formula. As if it wasn’t enough to have two guys being dangled in front of Clary, Cassandra dangles a third one this time around - Sebastian. But once the reader knows who Sebastian evolves to it is surprising that Cassandra even took that route. I would have hoped she avoided it.

Takes a while to figure out why Shadowhunters date young, marry young and give birth to kids young. Once that got through the reader it is easier to accept all those facts that seem too early for normal humans to be involved with.

Very few authors that I read have plot insets about my birth country - India. That’s why it always surprises me when I come across about India in non-Indian author's books. Cassandra has one of the Shadowhunter representing India in this plot.  Super cool.

Somewhere along the way I started liking this series especially after I got deeper into this third book in the series. Reader gets pulled into the life of Jace more than Clary. One could not help but fall in love with Jace - his resilience, his strength and how much he endures in a such a young life is commendable. I still have reservations on Clary as I feel her very impulsive although she demonstrates extreme courage in this plot. Simon turned out to be the one strongest when in comparison to his role in previous plots.

Cassandra kind of gave closure to every character in her plot for this series with this book and even brought back Jace and Clary together, evolved the rest of the characters much better with a fitting battle between good and evil at the end. So it made me wonder what would she have had for three more books in the series. Personally I would have liked it to end here. It took three books for me to like the series. I do hope that when I read the fourth book I will still like the series instead of revolting again.

This is by far the better book so far in the series with elements of mystery, tragedy, love, betrayal and war - all melded together. A very enjoyable read only that you have to survive the first two to get to this.

1) Plot Reveals:
a. Now that Simon has the Mark of Cain, how will this impact him, what does it mean for him is something we have to watch out for in Cassandra’s future books.
b. Although Sebastian is killed by Jace, they don’t find his body later. Cassandra has left this small opening for a future book in which we will definitely see Sebastian coming back. As for me I do think he will come back since no evil can be snuffed that easily. Wondering if it would be a battle between Jace and Sebastian or Clary and Sebastian or both Jace and Clary against Sebastian. One has to wait and read to know the outcome. Hoping that it would be an interesting read.

2) Sub-Plots: Like any book or series, Cassandra also has several sub-plots and small plots that make us want to know what is going on with the other characters as well, and wonder if they become main plots of their own. A few that intrigued me so far are:
a. Looking forward to see a plot purely for Simon. Or if not a plot that has more of his role. I am sure Cassandra has a book for him in future. :).
b. Simon finally seemed to find someone who could overpower his affection for Clary - Isabelle. I wonder if Cassandra explores this further in the next book or will it be just for this plot.

3) Again this book is written in different parts with each part titled and having a meaning of its own.
a. Part I is titled “Sparks Fly Upward” followed by a quote from Job 5:7. The title is in the quote as well.
b. Part II is titled "Stars Shine Darkly" followed by a conversation from William Shakespeare's Twelfth Night. The bit clearly gives the reader a glimpse that Sebastian would be the dark experiment of Valentine, although the reader wouldn’t know until much later into the plot.
c. Part III is titled "The Way to Heaven" with a quote from Siegfried Sassoon's 1920 poem The Imperfect Lover.
d. The final epilogue is titled “Across the Sky in Stars” with a quote from T. E. Lawrence. The quote is from his autobiographical account of his experiences as a British Soldier which he titled them as Seven Pillars of Wisdom and published in 1926. The title to the epilogue is a line from this poem. More about it here.

4) Other books, TV Shows and movies author mentions in the plot:
a. Anne Rice’s Vampire books are mentioned frequently in this plot (and so were they mentioned in Book II - City of Ashes).
b. Cassandra uses the words "ave atque vale" meaning "Hail and Farewell" as the words on Stephen Herendale's tombstone. These are the last words from a poem written by the Roman poet Gaius Valerius Catullus titled Catullus 101. More about the poem here.
c. Jace quotes a line from Christabel by Samuel Taylor Coleridge while describing the bitter-sweet relationship of Luke and Valentine - The marks of that which once hath been. The poem in itself is unfinished by Coleridge. More about the poem here.
d. According to stories of Bible, the Curse of Cain or Mark of Cain means if someone did something to harm Cain, the damage would come back sevenfold. More about it can be found here. As much as it protects Cain from being harmed - Therefore whosoever slayeth Cain, vengeance shall be taken on him sevenfold. And the Lord set a Mark upon Cain, lest any finding him should kill him.’, it also is a curse for he would be a fugitive and a wanderer – ‘And now thou art curse from the earth. A fugitive and a wanderer shalt thou be.’
e. Simon comments about Alec looking like Olivia Newton John in Xanadu. Gosh it has been ages heard the song “Magic” from this 1980 America romantic musical fantasy film. Come to think of it I never actually watched the movie. Something to add to my list for future posts.

5) Places we visit along with Clary through this journey:
a. While in Idris, Clary comes across Brocelind Forest. Upon checking I came across something called Brocéliande -  a legendry forest in France that appears in literature for the first time in 1160. Perhaps Cassandra took inspiration from this for the name of her forest. Also with this name it makes me place Idris somewhere in France - although Cassandra never mentions where exactly Idris is located in the map even though it’s a place hidden from mundanes. More about the legendry forest here.

6) Clary's Sights: Several scenes in the series described clearly shows that Clary had acquired the power of "Sight". However I have a feeling that we will be seeing these scenes either in the book the sights are seen or future books in the series. I am curious to see if they come true.
a. From Book I "City of Bones":
i. In a scene, Clary dreams of Jocelyn, Luke, Jace, Simon and Isabelle in various situations and positions . Here is what she sees:
1) Jocelyn in a hospital bed with eyes like bruises on her face.
2) Luke standing atop a pile of bones.
3) Jace with white feathered wings on his back.
4) Isabelle sitting naked with her whip curling around her.
5) Simon with crosses burned into his palm.
6) Angels falling from the sky and burning. This particular sight reminded me of Nalini Singh's Archangel's Legion - sixth book in The Guild Hunter Series. That plot focuses around incident called The Falling where angels fall from the sky and die. Although Nalini Singh's book was published in 2013, a good 6 years after this Cassandra Clare's book was published. My review of that book can be found here.
ii. She sees a vision where she is in the Glass City with Simon and Jace, and something about Simon that I want to see if it is what I think it is. (Described in Pg. 120)
b. From Book II "City of Ashes":
i. She has a vision in which her mother draws a protective Rune on her, which she finds it etched on her skin when she wakes up. This vision definitely becomes true…waiting for the other visions to come out for real for Clary.
ii. She sees another visions in which she sees Jace hurled from sky with golden wings at his back and another dark-haired boy with dark wings tipped with blood. Could that be Simon? Did it mean she was seeing Simon turning into Vampire and relating it to the blood on the wings? Curious to see what this vision might mean eventually
c. From Book III "City of Glass": Clary has some sights in this part too:
i. She has visions of new runes
Tags: books, critique by amateur, mortal instruments, reviews
Subscribe