Stars:  3.5 / 5
Recommendation: Another movie in the series with the right amount twists and turns making it watchable.

Mysterious Intruder is a 1946 American mystery film noir based on the radio drama of the same name. Directed by William Castle this is the fifth of the eight film noir series adapted from the radio drama produced in the 1940s. Richard Dix reprises as the main character in the film with Otto Forrest as The Whistler narrating in the background. This is the first movie in the series where the title doesn’t have the word "Whistler" in it. 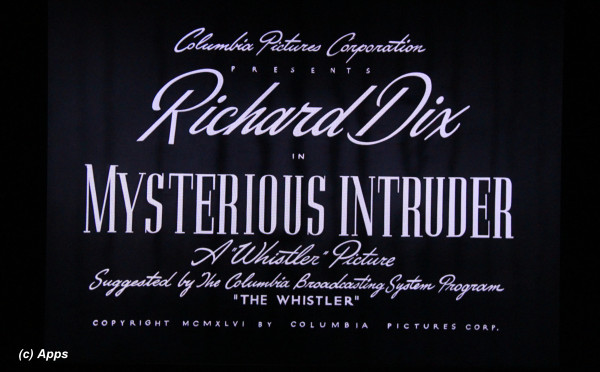 One Edward Stillwell, owner of a music store hires private detective Don Gale (portrayed by Richard Dix), to find a woman named Elora Lund, whom he had seen seven years ago when she was 14 years old. But then when a girl comes to his store claiming to be Elora Lund, he is murdered by Harry Pontos. Who is Harry Pontos? Why did he kill Edward? Is the girl who came to see him, is she really Elora Lund? Will Don Gale unravel the mystery of Elora Lund?

An interesting and almost a Perry Mason kind of mystery with all the elements needed except a court room drama. So far the movies I have watched in this series this is a better one. Having the right amount of twists and turns making you gripped to the plot. Enjoyable watch for any day.

Spoiler Alerts:
1) From iMDB: There was a real Jenny Lind, but there are no known recordings of her. Born in 1820, she was a world-renowned Swedish opera singer, dubbed "The Swedish Nightingale". At the height of her fame she toured the U.S. from 1850 to 1852 under the auspices of famous showman P. T. Barnum that reportedly made close to $1M. Lind gave most of her earnings to charity. She passed away November 2, 1887. A 1930 fictionalized film about Lind, A Lady's Morals (1930) was made by MGM
Tags: critique by amateur, movies, reviews, whistler
Subscribe