For review of all books in this series: Go here.

Stars: 3.5 / 5
My Recommendation: If you are an avid Nora Roberts fan like me, go for it for the conclusion is spectacular. A light read for any day.

Island of Glass is the third and final book in the series The Guardians Trilogy by Nora Roberts published in December of 2016. 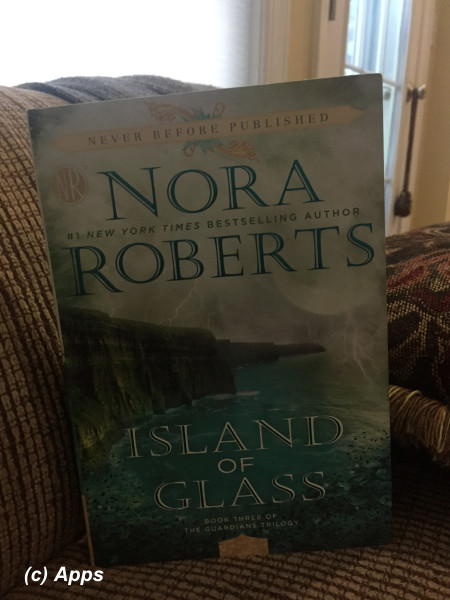 In the review of my first two books in this series, I had mentioned that it felt like a merge of Stars of Mithra and Circle Trilogy (My review on this series is here) series - both these written by Nora herself. Although not as strong as those series, this is still a good one. Nora's style of writing, her essence is coming back with this series. Yet, waiting for her to completely bounce back to her previous self.

Three goddesses of moon create three stars, one of fire, one of ice and one of water to celebrate the rise of their new queen. To keep them from the evil goddess, they place them in the sky. But they fall down to unknown places after being cursed by the evil goddess Nerezza, putting the world in danger. Now six people – three women and three men – have to bond together, earn trust, experience love, find the stars and fight the evil goddess. They are the Seer – Sasha Riggs; the Sorcerer – Bran Killian, the Werewolf – Dr. Riley Gwin, the immortal – Doyle McCleary, the Time and Space Traveler – Sawyer King and the Mermaid – Annika Waters.

In the first two books Stars of Fortune (My review here) - Book I helping find love for Sasha and Bran - and Bay of Sighs (My review here) - Book II helping find love for Sawyer and Annika - the Six bond together and find the Fire Star and Water Star. Now that two Stars are out of reach of Nerezza, the Six set about to find the third and the final star - Ice Star.

The plot in this book begins exactly where it ended in the last book - everyone being transported to Ireland after their fight with Nerezza. The Six settle in Bran's family manor in Clare, Ireland for, that is where they are directed to go to for their next clue on the third and final star - Ice Star. They continue with their research and training - boy train they would to overcome all their weaknesses. For, Nerezza would make her attacks triple-fold in order to stop the Six and acquire the final star the Ice Star. The Six would have to brace to find strength and magic in them that can fight back Nerezza and her human turned pet creature - Andre Malmon. In the midst of all this love blossoms between the last couple. No one Doyle had found in his long lifetime someone he would die for. No one had Riley found in her dual life someone she would die for. How will they conquer their apprehensions and accept the love? Will Nerezza find this as chip in their armor? Or will the Six make this as an armor? How will the fight end?

Of course the worlds will be saved - as almost all tales have happy endings. But the paths to the finale are different in each tale. However for Nora, the recipe seems to be working - three men, three women with supernatural / highly intellectual powers and fight against the evil power who want them, their powers as well as the world but eventually the six of them come out on top. Several of her trilogies are a similar based theme but the evil is different, the powers are different, characters are different, the paths are different and the happy endings are different. The plot in this series is no different. And it would have worked too…except for the fact that it is an amalgamation of two of her earlier trilogies. So, I would say a chip in her formula.

Despite that chip, this is one of those trilogies you still want to read because of the way each character perfectly complements their partner just like in this plot with Doyle and Riley. Doyle's cynicism is well-balanced with Riley's thirst to learn everything. If given a chance will Riley chose immortality to be with Doyle or will he prefer a mortal life will be interesting to watch. I would like either way Nora goes. The other reason I would like to read this trilogy is because of the evilness. Nerezza and Mormon are no more evil than Lilith in The Circle Trilogy or Evan Channing - atleast Evil that starts with Evan - in The Three Sisters Island Trilogy (My review of this series is here) or Lazarus Twisse in The Sign of Seven Trilogy. Yet the evilness is different, almost creepy and giving shudders. And finally I see the real Nora that we have been missing in the past few years. At last the spark is back, the fire is building and I do hope it continues to build in future books bringing her back to her full form.

Although I felt the ending a bit open-ended I am not sure if Nora would write a follow-up. She has done very rarely some quartets but most of her books have been trilogies or stand-alone. However I wouldn’t mind if she has a fourth book for this series.

Despite a few flaws I still loved this series much better than the previous ones that she had come up lately. All in all a very good book from Nora in a long time, a definite pleaser.

1) Grammatical / Factual / Location / Historical / Character Errors:
a. On Pg. 111, Nora spells "pantry" as "panty" in the conversation with Bran around the bottom quarter of the page in the dialogue -"Doyle said the same." Bran stepped back, "Kitchen panty…."

2) Plot Reveals:
a. Bran has his family manor on the very same land that Doyle had his family home three centuries ago. Will be interesting to see if in some way Bran and Doyle are connected centuries apart.

3) Nora references Dorian Gray in the beginning of the plot. How coincidental as the film "The Picture of Dorian Gray" is on my list to watch soon.
4) Nora also references goddesses from another of Irish mythology here - ones she hadnt used in her plots so far:
a. Ernma - Irish Mother Goddess and is one of the Tuatha Dé Danann. More about her here
b. Tuatha Dé Danann - loosely translated as "people of the goddess Danu" are a supernatural race in Irish mythology. More about this race here.
c. Fodla, Banba and Eriu - One of the sets of Daughters of Ernmas, they are called as the trinity of eponymous Irish Goddesses.
d. Morrigan, Badb and Macha - Another of set Daughters of Ernmas alos called as the trinity of War Goddesses.
e. Niniane - Also known as the Lady of the Lake who plays a predominant role in many stories around Arthurian Legend. More about her here
f. Fedelm - a female prophet of Irish Mythology. More about her here
g. Merlin - Wizard in the Arthurian Legend
h. Dagda - another god of Tuatha Dé Danann with supernatural powers including being a god of time. More about him here
i. Caturix - the war god. More about him here

5) Interestingly enough in the Key Trilogy (My review of the series here), her focus was on the Irish mythology of Daughters of Glass and one of the demi-goddesses was named Niniane. She is not the same as the Niniane who is called as the Lady of the Lake in this plot.
6) Riley seems to be a personal fan of Terry Pratchett books who is undoubtedly achieved fame in fantasy fictions especially in comic world. Although I havent read it, since Riley is a fan I am adding him to my list of books to read starting with his 2003 book Night Watch - this was what Riley was having her bag. :) More about Terry Pratchett here
7) I am yet to see all the first six movies of the Star Wars movie series. But it was surprising to see Doyle comment that the 1977 film Star Wars: Episode IV - A New Hope is a cinematic pastiche - a copy or an imitation. I wonder if that is true and I will only know if I watch the series. Something adding to my list again.
Tags: books, critique by amateur, guardians trilogy, reviews
Subscribe