For review of all the movies in the series: Go here.

The Whistler is a 1944 American mystery film noir based on the radio drama of the same name. This is the first of the eight film noir series adapted from the radio drama produced in the 1940s. In each of the films Richard Dix played the main character - although the plot is different in each as well as his role. This first film is about industrialist Earl C. Conrad (portrayed by Richard Dix) who hires Lefty Vigran (portrayed by Don Costello) to get a person killed. He does not know who will be killing this person and when, only that it will be done in next few days. But then he has a change of heart and does not want the hit to proceed. Thus the cat and mouse chase begins. Who did Earl wanted to be killed? Why did he have a change of heart? Who is the killer? Why are so many after Earl? The mystery unravels as the plot proceeds, each step unexpected by the viewer.

Just in 60 minutes the director William Castle manages to push you over the edge with fear and chills just by the tune of the whistler. That tune raises the hairs on the back of your neck and makes you wonder if he is there right now somewhere behind you. Brilliantly depicted and equally casted the actors well suiting to their respective characters. The fear of death is exploited in every which way in the film without making it all bloody and gory. The obsession to kill is also not lost on the viewer. Although I would have better liked it if the killer wasn’t revealed till the end.

Although classified as a B movie, I still think it is a chiller that sends you shivering and drives the fear through your bone. Well-made mystery movie for all those noir movie buffs out there.

1) The radio program aired from May 16, 1942, until September 22, 1955, on the west-coast regional CBS radio network. More about the program here.
2) Although Richard Dix played the main character in each of the films, Michael Duane played that in the eighth film after Richard Dix had retired.
3) "The Whistler" is voiced by Otto Forrest although uncredited.
4) A syndicated TV version of The Whistler was produced and aired for a brief period in 1954. More about that TV series here.
5) Per Wiki: In the 1990 film The Two Jakes, set in Los Angeles in the late 1940s, the opening narrative of The Whistler can be heard on the car radio as private detective J.J. Gittes (played by Jack Nicholson) cruises the streets.
6) Earl C. Conrad offers $10,000 to Lefty Vigran for the murder. That would be a considerable amount in that time for a person to spend it all. **Surprised**
7) Checkout the Superman magazine the deaf-mute errand boy reads. Boy oh boy that is some edition I would like to get my hands on. 8) According to internet: The signature whistling at the beginning of all The Whistler movies was provided by Dorothy Roberts, backed by the theme's composer Wilbur Hatch and his orchestra.

9) Check out the book the killer is reading while waiting for information to come through. "Studies in Necrophobia" by Ira B. Franklin. How apt of a book the killer picks up considering his profession. However, I could not find any such book existing with such a title. 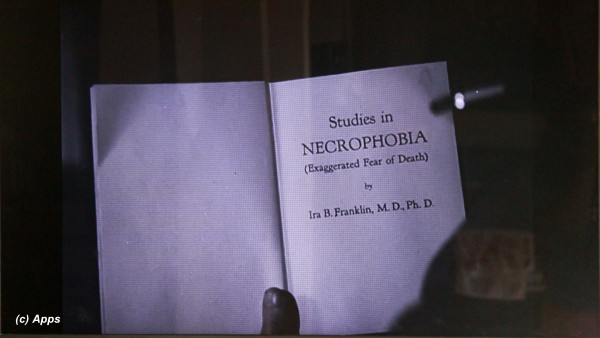 10) The movie reminded me of another movie The 39 Steps that I watched a while ago and posted review of it too. My review can be found here.
11) The series of these movies also reminds of Twilight Zone, TV series that aired in the 60s - a series that starts almost a decade after the last Whistler movie is made. Similar kind of narration in the background, similar kind of weird and unexpected situations in human lives and similar unexpected end to the plot. More about the series here.
Tags: critique by amateur, movies, reviews, whistler
Subscribe