For review of all books in The Shadow Series: Go here.

Stars: 3.5 / 5
Recommendation: You believe in super powers, abilities and the good that one can do with it, then this is the series you should read. Of course it comes with mix of eroticism too. ;)

Shadow Reaper is the second book in The Shadow Series by Christine Feehan published in June of 2017. The plot is again set in Chicago as the previous one. This time the story follows Ricco Ferraro - the next brother in the Ferraro family - and Mariko Majo - a blast from past for Ricco certainly. 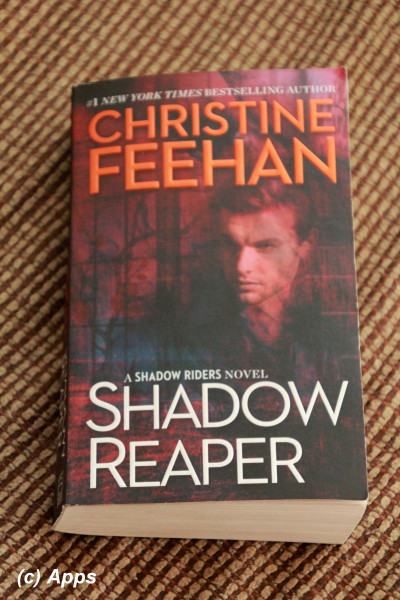 The Shadow Series is about the powerful Ferraro family who are revered with both admiration and fear. For they are famed to have powers and abilities that not a normal human can have.  Albeit that is only a rumor but they are more feared because of the ties to mob that they are known to have. Neither of these allegations ever could be proved. Power clung to them. But the neighborhood that the Ferraro family had hold on - Little Italy - has been crime-free, secure as well as a happy place for any of them to live. People are taken care of as their own until the line crosses where the punishment is severe and sometimes unforgivable. Everyone in the Ferraro family - Five bothers and one sister Stefano Ferraro has the head along with their mother and father - and the extended families are very successful, powerful, handsome/beautiful and with a hoard of abilities in them. Yet, they are not complete until they find their mate, the one that can match them in power, character and needs - for the Ferraros have high sexual appetite especially after they have used their abilities - to manipulate light and shadow to their advantage.

The plot opens with Ricco Ferraro in a hospital bed healing from the injuries caused because of the latest crash - a crash the Ferraro family suspected was not Ricco's reckless driving as usual, but a deliberate attempt to kill him. With his family's pleas and his brother Stefano's warnings, Ricco concedes to the fact that he needs a partner who can allow him to love her the way he wants to, who could also be his rope mode and allow him to practice his art of Shibari with her between closed walls - the only thing that grounded him other than being a shadow rider. But there is a danger from his past that is a threat to his family, a threat he had hidden from them and guarded them with his life day and night, a threat that comes from his two year training during his teens in Japan. What is that threat? Who has given him the threat? Can Ricco finally confide in his family to take care of it and at the same time keep him safe?

He finds Mariko Majo in his search for a rope model. But he didn’t expect her to be his shadow rider made who was throwing all kinds of shadow tubes around her. Mariko had her own secrets. She belonged to a family that had disowned her as she had dishonored them. But what was that she had done to dishonor them? And she most definitely was running from someone trying to find a safe refuge. Mariko's mother - Maria Hammond - was a rope model to a rope master - Eiichi Hayashi - in Japan who wanted to marry her against his families wishes and dishonor. But she had her reserves on the truth. And becoming a rope mode for Ricco was the only way she could get to the bottom of everything that happened to her in past.

Lying to the world of riders was unheard of. And Ricco was bringing things from his past that could mean a difference between life and death from him and the Ferraro family. Now Mariko brought more war to their front. How will the Ferraros fight this time? In the midst of all of this will Mariko accept Ricco the way he accepts her and wants her?

The other Shadow Rider family members that the Ferraros face during the course of the plot, some allies and some foes: Isamu Yamamoto, Dai Saito and his wife Osamu Saito, Mikito Ito, Akiko Tanaka, Nao Yamamoto, Master Kin Akahoshi (Ricco's jojutsu instructor) and Archambault family of riders (the one that mete justice to any riders and their families who include Marcellus Archambault, Maxcence Archambault, Sacha Archambault).

Another strong plot in the series by Christine Feehan but definitely has a few low points. A little off-putting when the author keeps using the term "giving her the gift" or "giving him the gift" when relating to the sexual scenes between characters. Seems very false. And she uses it in almost every book. I wish she finds some other line for it. There is an elaborate foreplay shown between Ricco and Mariko that could have been shortened a bit. As always she has a lot of repetitive statements and descriptions. The readers could still love the book without that.

As for the characters, they are strong as always. Be it male or female, she portrays them with full strength and character that is a notch higher, even though they have their little flaws. She also brings in strong family ties and support system into the mix. And as always leaves the readers with tit bits about possible future plots - some we could guess and some perhaps would surprise when those plots come to light.

Another book that one can enjoy reading it for any time of the day or season.

1) The Ferraros - male and female - wear pin-stripe suits when in public or in mission. The stripes let them to play with light and shadow well, so they disappear without raising a suspicion.

2) The Ferraros and their extended families:
a. Ferraro Brothers, their partners, Sister and Parents - Stefano Ferraro and Francesca Cappello; Ricco Ferraro, Giovanni Ferraro, Taviano Ferraro, Vittorio Ferraro, Emmanuelle Ferraro, Eloisa Ferraro (Mother) and Philip Ferraro (Father).
b. Cousins: Emilio, Enzo and Enrica Gallo, Tomas and Casimo Abatangelo, Renato and Romano Greco, Drago and Demetrio, Franco Mancini, Rigina and Rosina
c. Extended Ferraros: Alferi Ferraro (International Council Member), Damian Ferraro (Famous jeweler for the riders), Vinci (Ferraro's lawyer)
3) Emmanuelle Ferraro and Valentine Saldi (of the notorious mob family, the Saldis) have more role as a couple in this plot making it certain that they would be paired. It's only a matter of time to see if they combine the two families that have been at war since a century. And to see if Saldis were also as much mobs as the Ferraros were considered.
4) Nicoletta Gomez a 17-year old abused teenager was rescued by Stefano and placed under the care of Lucia and Amo Fausti as their long lost niece. She is also a shadow rider although she doesn’t know it yet. My gut says she would be a mate to Taviano. One has to wait for future books to know it.
5) We get introduced to a French counsellor - Oceane Brisbois - in this plot. I am curious to see whose mate she will become. Although mentioned briefly her role sounded important for a future plot.