Stars: 3.5 / 5
Recommendation: Eleven short stories that take the readers through various times and places from the author's mind - a quick read leaving one wanting more.

A Quiver Full of Arrows is a collection of eleven short stories by Jeffrey Archer published in 1980. This was his first attempt at short stories before the rest of them came out. One such of his future books Cat O'Nine Tales I had read and wrote the review here and I had loved it. So here I go again reviewing his very first collection of short stories that take the readers from London to China to New York to Nigeria filling them with tales of ancient world mixed with modern romance, making fortunes and betrayals at every bend. 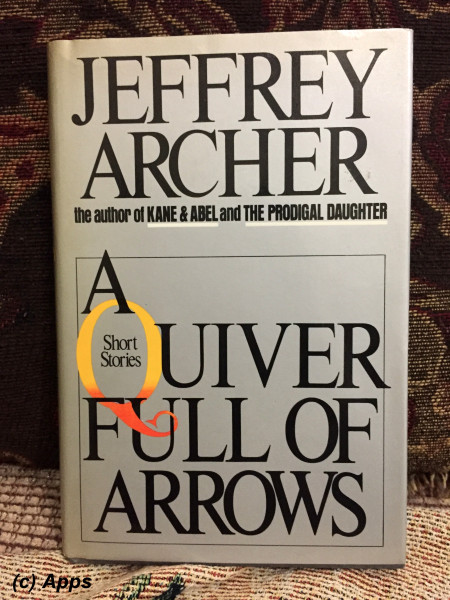 The first story titled "The Chinese Statue" revolves around a statuette from the Ming Dynasty that had now come to auction., although it was originally purchased by one Sir Alexander Heathcote who was serving for Queen Victoria as a Minister in Peking at that time. He had bought this in 1871 from a craftsman in a tiny village named Ha Li Chuan -  a statue that was in the craftsman's family for seven generations.  The remaining story tells how Alexander happen to acquire it and why it is being now auctioned over 100 years later.

The second story titled "The Luncheon" takes you to an incident in the past when a struggling writer was invited for a lunch with a lady named Susan who was married to a certain Hollywood Producer. The write reminisces on that incident. This story left me feeling really sad for the writer and angry at Susan for being a conniving woman.

The third story titled "The Coup" shows what a tough situation could bring out in a human being. The author uses Senhor Eduardo Francisco de Silveira and Manuel Rodriguez - two rival business magnates from Brazil - who are forced to spend time together during a very rough situation while in Nigeria.  Although it started a little slow and lengthy, as the end came nearer it captures the reader well.

The fourth story titled "Old Love" centers on two students - William Hatchard and Phillippa Jameson - of English Literature from Oxford in the 1930s. It follows their lives from the time they have been freshmen. It's heart-wrenching and beautifully written that makes one ponder a lot after.

The fifth story titled "The Perfect Gentleman" is about Edward Shrimpton who is met at a club in New York by a man from England who was there on business. This man who happens to be a publisher tries to find the hidden story behind a particular achievement by Edward during his youth.

The sixth story titled "Broken Routine" follows the routine of one Septimus Horatio Cornwallis who is a habitual person, and what happens when one day his routine is broken. A very humorous plot, if I must say.

The seventh story titled "One-Night Stand" is just about what it says. However, this is more about one woman being vied by two men from London - Michael Thompson and Adrian Townsend. Well, who gets the girl is what you have to read to know. :P

The eighth story titled "Henry's Hiccup" shows what happens when a rich brat named Henry - Grand Pasha of Egypt - who has never managed a single thing by himself is forced to do so when the countries go at war. That single hiccup is the center of this plot which is set in the early 1900s. Although I must say it left me thinking that somehow it was unfinished by the author.

The ninth story titled "A Matter of Principle" is about Sir Hamish Graham after years of being the Chairman of a successful construction company and also as an honest, hardworking, talented and filled with principles is faced with a dilemma when the world turns its thumb down on those principles. It's amusing to see how Sir Hamish makes his way through this changed world.

In the eleventh and the final titled "The First Miracle", the author goes biblical by sharing with the readers the one incident through the eyes of a young lad named Pontius - an incident that perhaps could be considered the very First Miracle as the title suggests.

As always Jeffrey Archer impresses the readers with his flair of writing in subjects of all kinds - some that do not resemble his other fictional stories went along. All the short stories are quick reads but they leave us thinking long and wanting more.

A perfect companion for any kind of readers, but specially would appeal for those readers who want to finish a book in a short interval of time.

1) Although Wikipedia mentions a 12th story, the book doesn’t have it. Titles The Century it is said to be based on the famous Indian Cricketer Mansoor Ali Khan "Tiger" Pataudi (aka Nawaab of Pataudi). I wonder if a future printing of the book had included this story, but this first edition I had doesn’t have this. Even the Author's note and the Contents speak for only eleven stories.
2) Of the eleven stories, ten were known incidents with some embellishment from the author per the privacy law and only one was from his imagination.
3) The Luncheon - second story in the book - was inspired by W. Somerset Maugham. It was also made into an episode on the 80s British TV Series Tales of the Unexpected. I have to watch this sometime in future.
4) Base on the story Old Love - fourth in the book - a play titled Love Song was made in 1987. It was produced by Richard Bennett for Masterpiece Theater. Something I would love to watch if it ever airs on TV or Theater. (Here is a brief intro on it)
5) Grammatical / Historical / Location / Character / Geographical Errors:
a. On Pg. 74, author mentions someone names Beatrice, but the entire plot of "Old Love" didn’t have a character named Beatrice.
6) The story "Broken Routine" reminded me of a scene from the 2006 hit Telugu film Godavari ( = Name of an Indian river).