Stars: 3 / 5
Recommendation: If you like easy read mystery with logic involving brain added with romance.

Heat Rises is the third book in the series of Castle books written by the fictional writer Richard Castle from the TV series Castle (portrayed by Nathan Fillion) published in September of 2011. Since I liked the second book, Naked Heat (My review of the book here), enough to finish it and admire it, I picked the third one in the series. The book resonates a lot with Season III of the TV Show (My review of the TV series here) just like the first two books. 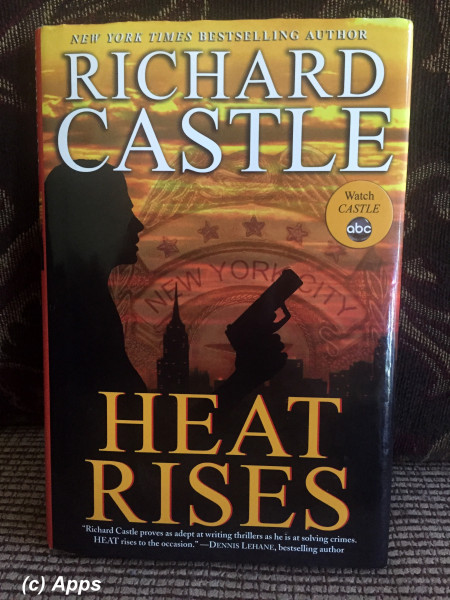 The plot opens with NYPD Homicide Detective Nikki Heat called to a crime scene at Pleasure Bound - a bondage club, murder of one Father Gerald Francis Graf - a priest at Our Lady of the Innocents. However, when Nikki reaches the parish, she comes to know that Captain Montrose had been there the night before following up on the missing person's report. Why would the Captain be there before even the victim was found? What was the priest doing in a pleasure place? Perhaps his secret night life gone bad? While Nikki investigated the murder, her tag-along magazine journalist Jameson Rook was off the grid with his own investigation of an international arms smuggling expose for First Press, giving enough break for Nikki to ponder about their relationship. Eventually when Rook returns they pick up where they left off, but what does it mean to their relationship? A progress or an adjustment for the now?

In the midst of this, Detective Heat is eagerly waiting on the results of the department civil service tests that she took for a promotion to become a lieutenant. Add to it someone was following here every step of the way in this case. Bits and pieces of the case baffle both Nikki and Rook along with her team that makes no sense to begin with - A missing St. Christopher Medal from the victim's home, their only lead to the BDSM clue gets shot by a sniper while he is being apprehended, Justicia a Guarda - a group of militant marxists and a CIA operative who is very uncooperative. And then the case becomes more than personal for Detective Nikki Heat as it progresses.

The key characters in this book follow the same route what the TV series characters go, including the emotions and feelings - budding romance between Detective Ochoa and ME Lauren Parry, Captain Montrose's secrets, expanding romance between Rook and Heat and Heat's past grief with regards to her mother. And still this book somehow managed to remove the shadow of Castle TV show from over it. Finally I could relate to the characters as actual characters of a book rather than alter-egos of fictional characters. Yes despite the similarities, the plot is very strong, with some really unexpected twists and turns. Although once or twice I could guess why a certain situation happened, yet it was totally a surprise when the actual course of events unravel finally at the end.

A well-written murder mystery based on a TV show written by a ghost writer. Thoroughly enjoyable and gripping till the end.

Spoiler Alerts:
1) There is still no mention of any child or ex-wives for Jameson Rook yet unlike Richard Castle in the TV Show. Perhaps future books might have some reference.
2) Interesting places from NYC mentioned in the book - Tony Rosenthal's sculptors in NYC, Bouley in Trbeca, NYC, EJ's Luncheonette in NYC, Belvedere Castle in Central Park, NYC.
3) Albeit briefly, there is mention of Castle in the plot. Even though it is in reference to Belvedere Castle, I would think it an appropriate reference to the TV show.
4) Detective Nikki Heat remembers Columbo in one of her musings. My favorite rumpled-coat detective. Find my review of one of his very first episodes here.
5) Rook mentions about the infamous Proust Questionnaire (http://www.vanityfair.com/magazine/2000/01/proust-questionnaire) that was a parlor game but became famous after Proust used it as a way to reveal more of one of the famous personality on the back of Vanity Fair. I remember reading this a while ago. Havent checked lately if Vanity Fair still carry it.
6) Grammatical / Historical / Geographical / Character / Mythological Errors:
a. On Pg. 56, para 5, additional "the" in the line "calmed a little, and a glimpse of the old skip…"
7) Rook and Margaret (Rook's mother) mention a few books and movies some of which I have seen / read and some getting added to my list - Spy Who Came in from the Cold, The Constant Gardener, A Perfect Spy, Call for the Dead, The Big Sleep, Sound of Music, Pal Joey, Dirty Rotten Scoundrels, 21 Jump Street,
8) Inventive words I came across in the plot:
a. Polemic - strong verbal attack on something or someone.
Tags: books, castle books, critique by amateur, reviews
Subscribe