Stars:  3.5 / 5
Recommendation: Cowboys, Kingdoms and Tribes mixed with treasure, deceit and romance - a perfect blend for a thoroughly entertaining film.

I had posted about the 1986 Telugu film Veta ( = Hunt) a while ago (My review here) thinking it had scenes that were exact copy from the hit American film Indiana Jones and the Raiders of the Lost Ark. After watching Veta I realized it was not that. After a little more pondering I zeroed in on to this 1990 Telugu (Indian Language) action-western adventure film titled Kodama Simham ( = Majestic Lion). It starred Chiranjeevi, Radha, Sonam and Pran in lead roles. Kaikala Satyanarayana is one of the producers along with his brother perhaps (I  couldn’t find much about that) Kaikala Nageswara Rao. He has a very important role in the movie as well. The movie plot is written some-time before independence. Sadly though it was the not movie with that scene either. **Sigh** 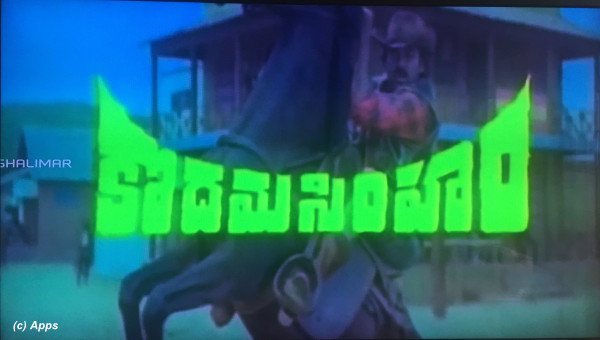 Bharath (portrayed by Chiranjeevi) is a robin-hood type cowboy but his agenda is to capture the villains responsible for gambling, prostitution and other evils. One day he ends up rescuing Swapna (Sonam) from a band of such goons. Swapna happens to be the daughter of Mayor Ranjith (portrayed by Pran). She falls in love with Bharath even though he doesn’t reciprocate. After one such fight with the goons in a saloon and a brothel, they come attack his parents (portrayed by Gollapudi Maruti Rao and Annapoorna) and kill them. On hid dying breath his father tells him that he had been adopted and he doesn’t know who his real parents were. Only one person named Sudi Gali can unlock that mystery. Thus begins the search for Bharath for his real parents which leads him to Sudi Gali and a much elaborate plot that ties everything neatly including the murder of his adopted parents.

Veteran and experienced actors such as Kaikala Satyanarayana, Kannada Prabhakar, Sudhakar, Allu Ramalingaiah, Ranganath, Chalapathi Rao and Jayanth play key roles in the rest of the plot. Who are Bharath's real parents? Why had Sudi Gali kidnapped him in the first place? Where does Sonam and her father fall in line? All that and much more we get to know as this complex western-based plot moves along.

Music and Songs are melodious and memorable as any of the Chiranjeevi movies. Music composed by Raj-Koti and Lyrics penned by Veturi Sundararama Murthy. Songs Sung by S. P. Balasubrahmanyam, Nagurbabu and Chitra.

One of the song "Pillo Jabillo" was considered as the fast beat song at that time until more took over in later years. Impressed with Radha as well since she kept up to pace with Chiranjeevi with every beat of her steps in the same speed and grace.

Pran being a Hindi actor, his voice was dubbed by Jaggaiah. He was famous for his booming voice and was well-known as Kala Vachaspathi' (Vachaspathi= Lord of Speech). No wonder Jaggaiah got the part to dub for Pran in this film. I wonder why Jaggaiah itself didn’t do the role. Nataprapoorna Mohanbabu portrays the role of Sudi Gaali who has a prominent part in the plot - part villain, part comedy - that is not to be missed to watch. Apt to his name, Sudi Gali ( = whirlwind), he creates such whirlwind of events that everyone gets captured in it and thrown along. Surprisingly enough Gollapudi Maruti Rao has a very small role for such a veteran actor.

Chiranjeevi definitely played his part as a cowboy pretty well, so much so that he lived the part. As for the heroines: Vani Vishwanath although plays a one-time girlfriend , Rosie, is just another side kick with no major part. The movie would have survived even without her role, but again then we would have had to see someone else in the song "Star Star Mega Star". :P Now, Sonam, there is a fair belle who knows only to stand like a doll who either smiles or cries - the only expressions she can manage to do. Her dialogues are with more stress than needed - perhaps being a Hindi actress her dubbing artist didn’t do much justice. Even her dance steps seemed stiff. No wonder she couldn’t reign as a heroine for longer as much more talented than her had swept by fast. Only remediating factor was that she can draw well, which of course causes more harm than needed for Chiranjeevi.

And finally Radha. Being a veteran actress and a lead heroine in many movies, especially for Chiranjeevi, I was surprised to see her in a supporting role in this movie. I would have loved the movie much better if she had been his love interest, for the chemistry between both of them is spot one as opposed to with Sonam where it looked play-acting. Radha doesn’t appear for more than an hour into the movie which finally cast some fresh breath to the plot. If not for her and her role, this movie would have not survived long just on Chiranjeevi. Playing as tribal princess Bijli, she exposes her tough side to the viewers as well - a side we had not seen of her before.

Comedy by Brahmanandam and Sudhakar is as usual timely keeping the viewers entertained with another layer of art. Stunts and thrills are a step ahead of that time, and well orchastrated. Strong plot played by equally capable actors (except for two as I mentioned above), directed beautifully taking the viewers into the land of kingdoms and cowboys. A thoroughly entertaining film that doesn’t bore you for a single second. Although the print is not so great, you can watch it on youtube if you want. Have a blast on any day!

Spoiler Alerts:
1) This was the first South Indian film to be dubbed in English as Hunters of the Indian Treasure.
2) The male actor in this picture, I can see him in many movies that came after this, but cannot put a name to the face. Another character artist who had a very brief appearance in this blockbuster. 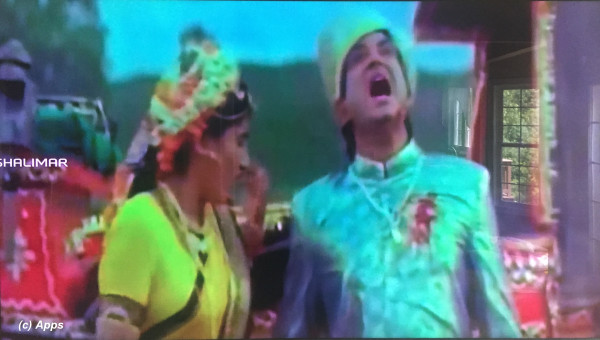 3) Chiranjeevi was still titled Supreme Hero at this point of time. Not yet as Megastar as we know now. 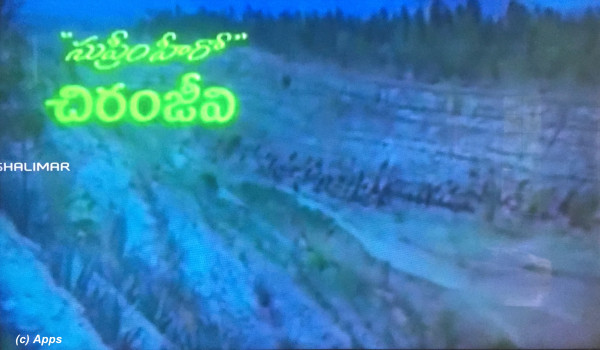 But the song "Star Star Mega Star Star" in the movie definitely introduces him to the title of Mega Star. However it is not used until his first film the following year after this, the 1991 hit Stuartpuram Police Station, in which he is shown with that title.

4) The opening credits are focused entirely on Chiranjeevi, his horse, his horse-riding skills and life as a nomadic cowboy. It has excellent Cowboy music that is the background score throughout the movie when Chiranjeevi is shown. Here is just the audio of the same (couldn’t find the video of it):