Stars: 3 / 5
Recommendation: If you are a sports fan and love football, this is a perfect book for you.  If you are not you will find it as an autobiography rather than a fiction.

Playing for Pizza is a short novel by John Grisham published in September of 2007. This is one of the non-legal genre books written by this author that focuses on American Football. The basic plot is about Rick Dockery who is shunned by all the National Football League (NFL) teams in America due to his worst performance, when his agent Arnie tries to get him signed up to play for  Parma Panthers, in Parma, Italy and about how Rick fares with the new team. 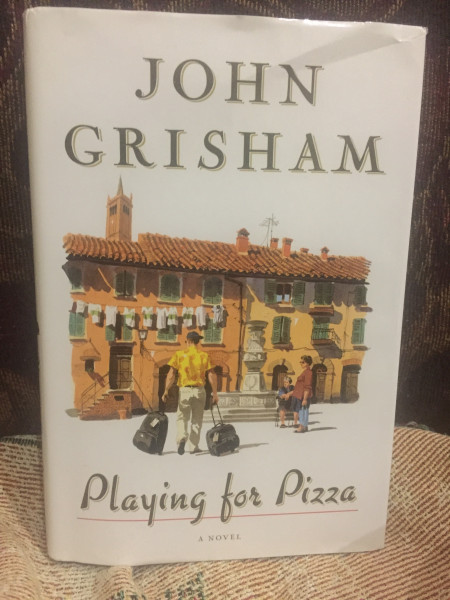 Rick Dockery had been a constant moving player from one NFL team to another. He was with Dallas Cowboys then a year later was moved to Seattle Seahawks and now he was with Cleveland Browns - although his agent Arnie was not sure if he would last there long enough. He had been moving year after year to team after team as a third-string Quarterback (backup to the backup Quarterback) with no success. In the recent game he was in, he single-handedly managed to lose the chance of going to Super Bowl for Cleveland Browns. Irony was they were clearly on the path to win and he was playing for them. When none of the NFL teams wanted him on their team, to save his face and give him a break, Arnie manages to get him as a quaterback to the Parma Panthers in Parma, Italy. Reluctantly he accepts the position and lands in Parma, Italy under Sam Russo as coach with Signor Bruncardo as the owner of the team.

Parma Panthers were no NFL team nor the facilities were close to what he had had while on NFL. Almost all the players played for the sport of it, expecting no money or remuneration, hoping to win an Italian Super Bowl once at least and of course for the pizza at the end of the game. His team included three American players including him - Slidell Turner (from Colorado, drafted late by Colts and dropped off by them) and Trey Colby (Who had played for Ole Miss.) - and the rest being the local Italian players. Will Rick realize his potential as a quarterback and play his full here? Will he finally accept the team and belong to them? What about the scandals and issues he left back in US? Will they come and bite him? Will he face them or run away?

The plot is centrally located on Rick Dockery and his day to day life in Parma along with the games. Each day is covered in a very detailed manner down to what he ate and drank too. And so are the places he visit while living in Parma and also the games he played. Every castle or cathedral is named and every ball is explained. It took a few chapters for me to warm up to the plot, and once I warmed up to it, I liked it enough to complete it. Definitely you will learn a lot about Italy, Football and Food even though you might miss the main character or the story. That is the downside of the book - it takes you too much into the other aspects and skirts around the border on the main topic, except for the ball by ball byplay by the author.

If you are a sports fan and love football, this is a perfect book for you.  If you are not you will find it as an autobiography rather than a fiction. It was ok for one-time read, but I like John Grisham in legal thrillers better.

1) The places and teams that the author used are really existing in Italian Football League. However the players have been his creation.
Tags: books, critique by amateur, reviews
Subscribe