Stars: 5 / 5
Recommendation: A perfect meld of the brighter - mythology, adventure and romance - and darker - stealing, fraud and murder - shades in this plot that revolves around three pairs and their ancestors all connected around three silver statues, The Three Fates.

Three Fates is a stand-alone treasure hunt - romance novel by Nora Roberts first published in April of 2002. The story-plot is ties two plots from history and mythology - Sinking of RMS Lusitania in 1915 bringing in the historical reference; the Greek and Roman mythology about Fates - Clotho who spun the "Thread" of human fate, Lachesis who measured and dispensed it and Atropus who cut the thread determining the length of time the human lives. The book is also written in the form of three parts - Spinning, Measuring and Cutting - all blended into one single book; could have been a three-part series on its own too. The key characters are Malachi Sullivan, Gideon Sullivan and Rebecca Sullivan who are thrown into this adventure when a precious family heirloom is stolen from them, a hunt that takes them from Ireland to Helsinki, Prague and New York. 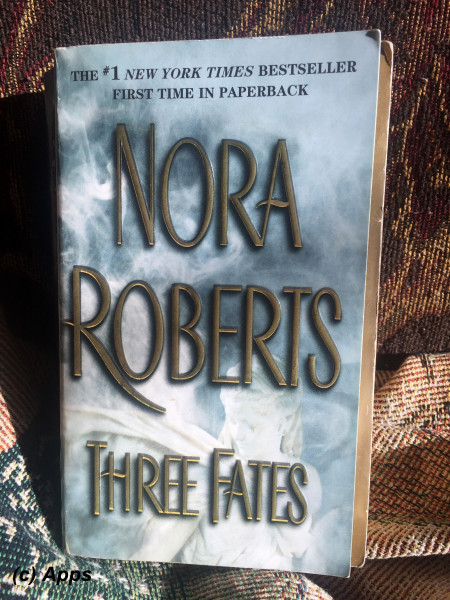 The plot opens on May 7, 1915 aboard RMS Lusitania - the fateful day when the Cunard ocean liner sank during the First World War when torpedoed by the German U-boat U-20. But wait that's only a miniscule event in this grand-schema of the plot that Nora Roberts wove around it. The key character - Felix Greenfield, a career thief - is on this very ocean liner robbing one Henry W. Wyley of his possessions including a small silver statue, the first of the three fates Clotho. Henry had acquired it recently for his private collection at Wyley Antiques. And he was crossing the Atlantic to the Ireland to purchase the second one of them, with a possibility of acquiring the third soon. However with the torpedo hit, Henry is lost to sea while Felix along with a mother and a child, whom he saves as a last ditch effort to do something good before dying, come out alive. That single act of Felix changes his path, and the lives of many others he touches.

The plot moves to 2002 in Helsinki where Malachi "Mal" Sullivan tries to woo one Dr. Tia Marsh - a reputed author on Greek myths who was currently promoting her latest book - to know more about the Three Fates, for she is one of the crucial connections to all of it. His brother Gideon Sullivan hunts down Cleo Toliver - a dancer by profession, but on hard time working for an exotic dancing club in Prague - for she is the key to the second fate Lachesis. While Rebecca "Becca" Sullivan tags along Jack Burdett - who owns his own electronics and security system - in search of the third fate Atropus. Tia comes with not only intelligence but with chronic shyness and a bout of paranoia. But a strong back and willed character of hers attracts Malachi. Cleo has a spine of steel and portrays a hard heart to protect herself from not repeating a mistake. Yet that hard heart and steely spine melts Gideon down to a puddle. Jack Burdett with his self-made electronics and security system perhaps never thought could be blown away by a belle from Ireland, Rebecca. More than his handsome looks, Rebecca falls hard for his ethical and very intelligent mind.  All three pairs come with their share of baggage but have a goal of finding the three fates.

As the Sullivans raced to find the three Fates, so did Anita Gaye - owner of the most prestigious Morningside Antiquities in New York City - races along with them, using the most meanest of the meanest methods to outwit them and acquire the three Fates. Anita Gaye was no ordinary criminal or a mob boss that one could just fight with fists or guns. One had to have intelligence, knack and smartness equal or more than her to out master her plans. For Anita Gaye will not stop at anything to acquire the Three Fates as they together stand for a symbol of power and wealth beyond imaginable.

While the first part Spinning introduces the past history and the present characters to the plot, the rest of the plot covered in the remaining two parts - Measuring and Cutting - takes us through the adventure the three pairs carry on. An adventure that you would want to be part every bit of the way, even though some are dangerous to broach. Each of the heroines are a perfect complement to the heroes. Everyone has a role to play in this elaborate cat and mouse chase that perhaps has been spun, measured and cut by the fates long ago when Henry Wyley had acquired the first one. To an extent even Anita has a part in it. However, there are consequences to face and payments to be given to the fates for every decision and step they make. Will Anita Gaye pay in the end? Will the fates be united? How do the three pairs weave the tapestry that the fates have given them? How do the three pairs outwit Anita, acquire the fates and at the same time find love along the way is what the rest of the plot is about.

Three Fates is one of my favorite stand-alone novel by Nora Roberts. Of all of her books that I have read, some remain stamped in my heart and brain that sometimes it makes you part of the plot. This is one of them. From page 1 to the end it grips you from all angles, gluing you to the bed or sofa you are sitting on while reading. A complex and intricate plot with all elements of mythology, adventure and romance along with the darker shades of stealing, fraud and murder mixed in. Nora Roberts at her best with this book. A book that you should pick for any day to thoroughly enjoy it.

1) Grammatical / Location / Historical / Geographical / Character / Mythological errors:
a. On Pg. 109, the last but one line has "set" instead of "wet". It should read  " Her lashes were still wet with…"
2) Again there is a mention of my favorite movie Affair to Remember in the plot when Cleo Toliver sets a meeting with Anita Gaye atop the Empire State Building. How romantic and yet depicts a calculated move in this plot though. My review of the movie is here:
3) And there is mention on King Kong movie, not the remake but the original. I have to watch the original yet.
Tags: books, critique by amateur, reviews
Subscribe