Stars: 2.5 / 5
Recommendation: Another interesting series on immortal hunters, walking deads, fairies, angels and humans; with a connection to Hell this time around - giving a different perspective to that world.

Hunter Forsaken is the second book in the Wild Hunt series by Nancy Corrigan and published in February of 2016. The plot is set in a world where humans, immortal hunters, fairies and the walking dead co-exist. In this book, the plot revolves around Ian Callahan - the newest rider in the Wild Hunt and at the edge of sanity - and Tegan - one of The Huntsmen who had been recently released from the curse meant for Unseelie Court and is fighting her own demons. 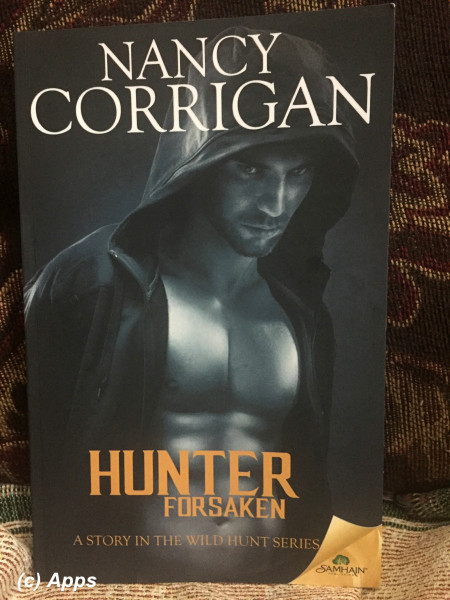 After being for a millennium in Hell suffering as a result of deadly curse that was meant for Unseelie Court, the children of Arawn are released to be free. They serve as The Huntsmen going on the Wild Hunt in the night saving the world from the evils that humans cannot even fathom and also to keep their sanity intact which was barely survivable after what they went through for a millennium. Tegan is one of siblings who doesn’t fail to do her duty as The Huntsmen but is refusing to go to Ian, even though all signs show that he is her mate. Ian Callahan - a human - has been turned into a rider on the Wild Hunt, newly turned. He was engaged to be married to Cynthia when he was a human. But now as a Huntsman he is facing the fierce rage that only a mate can handle and heal. Although Tegan had seen Ian in her dreams all the time she was suffering in Hell, in the past three years. He had enticed her and lured her, but after the dream when he woke up he had walked back to his fiancee.  Tegan didn’t want to be with Ian because he was in rage and need to be pulled out by having sex with him. She wanted to live the dreams she had seen. She didn’t want to be a fantasy to him? Was he reacting to her because he was in rage? Had he forgotten his memories as a human? Or was he reacting because of the memories of those dreams? Added to that Tegan has her own demon in the form of her ex-boyfriend - Bjorn - that she is fighting as well.

How is Tegan connected to Ian so that he could walk into her dreams? In order to fulfill her duty, she finally goes to Ian to help him come out of his rage, hoping she wouldn’t need to have sex with him to do that. But she finds out that he is a god as well, only Ian didn’t know it either. He left a piece of himself inside her - only a god or demigod can do that. Who were Ian's actual parents? How could a demigod be hidden between humans? And what has Minerva - Tegan's step-mom - to do with it? Then there is the jagged black that appears on every Huntsman's hand who have been sired by Arawn, when they find a mate. What is the test that Triad has thrown at her? Will she succeed? In the midst of all of this, Ian is bent on finding Allie - his ex-fiancée Cynthia's sister - who had been lured into a fairy ring by Raul and Craig, the Redcaps. And Ian is also trying to find himself and his powers too. Will Tegan and The Huntsmen help him? Will he accept their aid?

Another erotic fantasy novel created in a world filled with humans, fairies, hunters, angels and all the immortals under the sun. Although I like the plot-line and story setup along with the characters, the eroticism is more than I would normally like. A bit toned down on it, this would be a winning series for this author. Interestingly enough I am unable to find the first two books she has written in this series anywhere in store or online. And the series started in 2015. Surprising that it is already out of print. And a new book has been announced. Hoping to find the first two and waiting for the new one, I would love to see where her characters take the plot and also if the story-line changes route.

Another easy read for those lazy days and hot nights.

1) In the third book Hunter Mourned (Review here), when I read that Ian Callahan was the son of Lucas aka Lucifer - the Deomn King and Fallen Angel - and Minerva - Goddess of Love and mate of Arawn, and that Minerva is mother of The Huntsmen, I was wondering about incest. But in this book it is clearly shown that The Huntsmen that Arawn creates are all from him mating with other women. Minerva is their step-mom who came into Arawn's life as his true mate after his children were born. So there is no incest as I had imagined. Phew! I wouldn’t have liked to continue to read the series if that would have been the case.

2) Tegan had a boyfriend named Bjorn who was casted out of the Teulu after being marked as The Huntsman - although Arawn denied that he hadnt done so. Bjorn had killed himself as a result. But Bjorn had used her only as a sec buddy and not really loved her as she did. Was that why Arawn handed the judgement? Or was it someone else? Something we will know once we read this book.

3) Calan was mated to Harley - a half breed fairy and also half sibling to Ian. Their story is told in the first book Hunter Deceived. More of their story is revealed in this book.
4) We get introduced to Trevor who would be Rowan's mate in the third book in this series - Hunter Mourned. My review on that book can be found here. All symptoms of Trevor being Rowan's mate and more are seen in this plot. I had already read that book before so it was interesting to see the dots getting connected.
5) It is also revealed that Dar is Harley's father and the leader of the Unseelie Fairy Court.

6) The Huntsmen (men and women both alike are called so), have alternate form that resembled a cross between a demon dog and a human - a beast from Hell. They also had powers that surpassed even what the highest level gods hold. They also had the ability to walk - only ones from the Underwold - and also their mates. The Huntsmen are immortal - cannot be killed at all permanently - due to their ties to Arawn - the Lord of the Underworld. Hence have been envied upon by all the Gods, everyone in the Underworld, the Fairies and Humans alike for centuries.

7) The Huntsmen also have other siblings who are still in Hell but quarantined as they couldn’t survive the tortures. However one sibling - Cain - survived but in a very fragile situation. His character seems shady. Will there be a book about him in future. We will have to wait and see.

8) Calan, Rhys, Rowan, Teagan, Cain and Zeph are siblings and children of Arawn. But I wonder who their mother was since Minerva wasn’t.
a. Calan is the oldest and their leader, has ability to connect all their minds linking them together.
b. Rhys acts as their strategist in the battle as well as their counsellor in life.
c. Tegan was the third in command in Arawn's army.

9) Triad is the triple-faceted God who ruled all over them - immortals, humans, fairies and walking dead alike.
10) If a hunter failed their challenge they are sent back to the prisons on hell and suffer eternally. But more than that every failed hunter would cause a splinter in the barrier between the Underworld and the mortal realms which would release the evils of Underworld into the mortal world. Thus failing the purpose of the hunter to protect the humans.
11) Looking forward to see if a future book has a story pairing Rhys and Allie whom we met in the third book Hunter Mourned.
12) Just like Arawn had Huntsmen, Minerva had HandMaidens - seventeen sisters who live and die as humans again and again until the goals given by Minerva are completed  - tasks that came down from Triad as he plays the chess with the maidens too.
13) The Huntsmen have been held in hell as prisoners for a millennium even though Arawn was their father. Some bargain between Arawn and Triad had led them free. A story perhaps told in other books by the author.

14) Grammatical / Geographical / Location / Character / Historic Errors:
a. On Pg. 148, it should read "You knew you were an incubus?" A missing "you" in the line.
Tags: books, critique by amateur, reviews, wild hunt
Subscribe