Stars: 3 / 5
Recommendation: Shape-shifting Leopards, Mobsters and Love - A weird combination right? Well, it's worth reading on those lazy days or to bring you out of any kind of dull mood.

Leopard's Fury is the ninth novel in the series Leopard Novels by Christine Feehan published in November of 2016. The plot revolves around the couple Alonzo Massi / Fyodor Amurov & Evangeline Tregre. 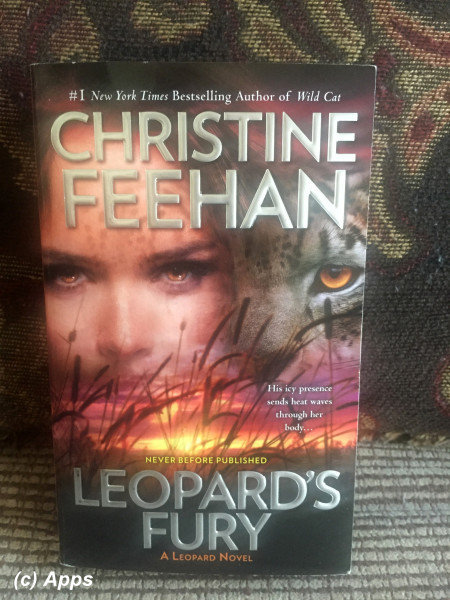 I have read all the other series by Christine but this was one series that I had started with the first book The Awakening but never could move forward. For some reason it did not capture me. However the cover of this book somehow caught my attention and I had to simply read it. And I am very close to change my opinion on this series as well.

The entire Leopard People Series focuses on humans who have ability of shape-shifting to leopards. Each plot covers one couple that are destined to be mated in this lifetime just like so many lifetimes in the past. And surrounding this couple the plot expands on this species of leopard shape-shifters, their advantages as being so, their perils and how their lives move along in this 21st century. All of the plots are either set in Borneo Rain Forest - coast of South East Asia - and Louisiana and Texas in USA or eventually lead there. These leopards come from very hard and cruel lairs, but they come out on their own, find their mate, infiltrate the mobs and acquire the territories taking over them.
Evangeline Tregre owns a small bakery San Antonio, Texas. Robert Lenoux - one of the evil male leopard shape-shifter - is now on her tail forcing her to leave her bakery and come back home in New Orleans to serve her duty to the lair. Evangeline had left that life not because she wasn’t a shape-shifter - atleast from the eyes of the lair which she hid expertly - but because she hated the life of the criminals that they were - especially towards women. On one such day when Robert tries physically threaten her to take back to the bayou, Alonzo Massi - one of her regular customers - saves her from Robert. Evangeline realizes that Alonzo is also a shape-shifter leopard and an Italian. As much as she was grateful for Alonzo to save her, her female (her shape-shifting other self) - Bebe - and she reacted extremely towards him, both physically and sensually.

Who was Alonzo? He was named to be working for the crime boss Antonio Arnotto who was murdered. And it was rumored that Alonzo perhaps would rise out of the ranks and become the new crime boss. Evangeline had left the criminal life of her lair and come all the way here only to be attracted to another criminal. What is she going to do with herself?  Alonzo himself is unhappy at how his body was reacting to Evangeline. The past from the darkest places in Russia where he grew up, hadn't left him when he moved to the States. His leopard - an Amur leopard - was the most ferocious of all the shape-shifter leopards that made him a member of the bratya. And he had a hard time controlling his leopard anywhere else except in Evangeline's bakery. For some reason she soothed not only him but his leopard as well. Evangeline hadn't realized that she was a leopard whisperer - one who calmed and soothed the leopards in the shape-shifters - until she met Alonzo and Timur.

But that was not all that would cause trouble for Evangeline and Alonzo. The grand-daughter of Antonio - Sienna - was married to Elijah Lospostos, who was also another crime boss, and above all a shape-shifter leopard. Business dealings between Alonzo, Elijah, Patrizio Amodeo - another crime boss and Emilio Bassini - another crime boss could cause an unforeseen threat for Evangeline. But she hadn't foreseen was one of her cousins to be involved with this quartet - Joshua Tregre. Although he hadnt seen her will he recognize her? Added to that Patrizio's unwanted attention towards her caused Alonzo's leopard to rise. And the insistence of Emilio to use her bakery as neutral ground for their meeting - why did he want it? In the mix is Alozno's past involving his cruelest uncle Lazar Amurov and Evangeline's past involving her father and a mysterious bad leopard who had been hunting her since she was a baby.

How will Evangeline and Alonzo / Fyodor fare out in the end? Will she accept his dominance? Will he love her enough to accept her independence? Which of the crime bosses is retaliating against them? Will their past catch up to them eventually? The plot continues exploring answers for these questions and many more, giving the reader glimpses of past, present and many sub-plots - all tying neatly with the main plot.

I can say now that I will be adding this series as well to my collection. Will you be doing so? ;)

Spoiler Alerts:
1. Plot Reveals:
a. The plot in this book begins sometime as soon as the sixth book Savage Nature (Drake Donovan and Saria Boudreaux story is told in this) is finished and continues beyond the eighth book Wild Cat (which tells the story of Elijah Lospostos and Siena Arnotto) although by timeframe it doesn’t span more than a year. That is why we see a lot of characters that had popped up in both these books in this plot as well. And the training Elijah had started to put Alonzo Massi as the head of Antonio Arnotto's territory completes and Alonzo is not just Siena's soldier but Arnotto Territory's head too, thus continuing this plot from where it left off in Wild Cat.
b. Christine gives name to the female leopard of Evangeline, calling it Bebe. She hadnt given names to anyone's leopards and I wondered why. It makes a better read when the leopards are also named .
c. Mitya Amurov is given his own territory - Patrizio Amodeo's territory - continuing with the leopard people's end goal in taking over the mobsters.
d. Christine doesn’t close out the threat to Evangeline and Alonzo / Fyodor from either Emilio Bassini  and Ulisse Mancini - heads of two more mob territories - or from his uncles in Russia. More meat for future plots involving Mitya's story perhaps or Gorya's or Sevastyan's or Timur's when they eventually are written by Christine.
2. Sub Plots:
a. One of Saria’s brothers, Mahieu, and Charisse Mercier – another female leopard – are dating per the plot in Savage Nature. Will Christine elaborate on this in one of her next books, will she have a main plot or sub-plot for Mahieu?
b. Saria, Drake Donovan's mate; Catarina, Eli Perez's mate; Siena, Elijah Lospostos's mate - are all pregnant as of this plot still. Emma, Jake Bannaconni's mate, gives birth to a male child in this plot.
c. Jerico Masters and Evan Mitchelson - security / ranch hands all rolled into one at Jake Bannaconni’s property - aren't shifters but are loyal to Jake. Perhaps we will get to see more of them in future.
3. Christine also introduces a few non-leopard people as the plots proceed, but a few stand-out making me wonder if she would make them shifters in future plots
a. Susan Hindman, Senator Hindman’s daughter, is introduced in Burning Wild plot. Christine made her character as brilliant, sharp and fast-learner at a very young age. Will Christine make her a shape-shifter in a future plot is something one has to wait and see but all signs point towards that for me.
4. Christine introduces us to her future heroes of this series who are yet to be mated as of this book. We keep getting glimpses of their lives and past as each and every story progresses, making the reader wonder whom of these will Christine elevate in her future books.
a. Joshua Tregre – I have read his story in the 10th book Leopard’s Blood. My review of the book here.
b. Shilo – a female Leopard being protected by the leopard people in Borneo Forest.
c. Felipe and Leonardo Gomez Santos – brothers from Brazilian rain forests introduced in Wild Fire.
d. Jeremiah Wheating – a cub shifter who accidentally joins this group in the Wild Fire plot.
e. Mateo – Connor’s young step-brother
f.  Dr. Abel Winters and his wife Mary Winters; Dr. Liam Mulligan, Dr. Mason. Doc – Leopard Doctors who help the leopard shifters when in need. Suddenly from Wild Cat the doctors have become Doc. Which one if this is addressed as Doc is unclear.
g. Remaining Boudreaux brothers – Mahieu, Dash, Gage and Lojos
h. Trey Sinclair and Evan Courtier - work for Jake Bannaconni
i.  Joaquin Estrada and Tomas Estrada – Elijah’s bodyguards.
j.  Alonzo Massi aka Fyodor Amurov's brother Timur Amurov and his cousins Gorya Amurov, Mitya Amurov and Sevastyan Amurov - They come from a dangerous lair called the Amurs who are part of the Bratya in Russia.
k. Kyanite "Kye" Boston, Borya, Kirill, Matvei - work for Fyodor / Alonzo
5. Grammatical / Character / Location / Geographical / Historical / Mythological Errors:
a. Repeat Phrase: The line "You have more passion in your little finger than most people do in their entire bodies." is repeated in this plot. She had used the exact same statement in her seventh book Cat's Lair where she told the story of Eli Perez and Catarina Benoit.
b. On pg. 295, last para, in the scene Christine describes she has Brice, Reeve and two other uniformed officers as cops sitting in the room with Alonzo, Evangeline and his team of leopards. Immediately on pg. 297 while still in the scene, Christine mentions that Sevastyan was standing in the shadows directly across from the five policemen. I re-read the three pages again but I still couldn’t figure out where the fifth policeman came from. Obviously an error on Christine's part.
6. As I read this Leopard People books and as I see more and more of the plots getting closer to or around New Orleans Bayous, it reminded me of another of Christine Feehan's series that is set in New Orleans. One of the team from her Ghostwalker Series (My review of the books in this series are here) - Elite Air Force Pararescue Team - are also set in New Orleans Bayous.  Will Christine have a cross-over plot between both the series? I hope she does. Would be interesting to see how man-made super soldiers fare with the naturally born super humans. (Christine, are you reading this? :)
Tags: books, critique by amateur, leopard people, reviews
Subscribe