Stars:  4 / 5
Recommendation: A gem of a movie from the past that is forgotten - watch it for a rewind, relax and remember moment. 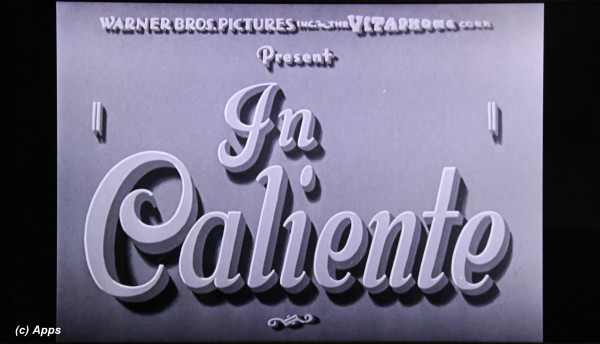 Lawrence "Larry" MacArthur (portrayed by Pat O'Brien) is the President of one of New York's Smartest Magazine - as Larry displays on the door of the office - titled "Manhattan Madness" and Harold Brandon (portrayed by Edward Everett Horton) is the Vice President and silent partner. Larry is a critic of music, plays, singers, concerts and recitals - without going to a single show; and a full-time boozer. In the meanwhile, Clara Thorne (portrayed by Glenda Farrell) lures Larry into marriage, which Harold doesn’t approve of as Clara already had already won three breach of promise suits. In order to save Larry from being the fourth, Harold gets him drunk - which is not too hard - and takes him away to Caliente in Mexico.

Incidentally the hotel that they stay in is managed by Jose Gomez, uncle and manager to a beautiful Mexican dancer Rita Gomez (portrayed by Dolores del Rio). Not knowing that she is the very Rita about whom a year ago he had written a very scathing review that lead to the cancellation of their shows and loss of income, Larry falls for Rita. Thinking that Larry's mind can be evaded from Clara if he had Rita's company, Harold hires Rita to be a companion to Larry while they are vacationing in Caliente. Knowing the true identity of Larry, Rita and Jose agree for Harold's proposal - Harold also is unknown the history between Rita and Larry. Thus continues the hoopla between Rita, Larry, Harold and Jose - one trying to get revenge, one trying to forget the doomed wedding and eventually causing love to bloom. How will Rita and Larry handle this unexpected love? Will Rita forgive him for the misery he caused her? Will Larry understand what the role of a true critic means? Will he realize his mistakes? Will Larry get rid of Clara finally? That, my friend, one has to watch the movie till the end.

Very interesting way of revealing the actors in the opening credits - each actor's name along with the name of the character they played was displayed on a live portrait of them in character-mode. So one gets to see the actor who is playing as well as the role they are portraying at the same time.

Very lovely music and dance choreography in the film. Particularly I loved the song "The Lady In Red" and it's choreography. Tony DeMarco and Sally DeMarco perform during this song - the famous Dancing De Marcos, successful  American burlesque/vaudeville dancers in the first half of the 20th century. This is one of the two songs that Busby Berkeley produced and choreographed. The song is Sung by Winifred Shaw, Judy Canova and the Chorus.

Dolores Del Rio gives us an eyeful with her amazing dance in the final number "Muchacha" in which she also briefly sings. Her partner in the song is Phil Regan who portrays the role of Pat Casey - although goes by Pedro Casinova in Caliente. He also has a single number "To Call You My Own" in the movie.

Timely comedy and enchanting musical numbers keeps the viewer glued to the screen. A thoroughly entertaining and fun film that pleases all your senses.

Spoiler Alerts:
1) The movie was also known as "Viva Senorita".
2) Larry calls Whiskey by its slang word of the time "Gay and Frisky". It certainly would mean a lot different if used now. :P
3) Checkout the Dictaphone that Harold uses to call Larry's assistant Ms. G - ancestor to our current intercom. :) 4) Harold pronounces "valet" with the sound of "t" at the end as opposed to keeping it silent as how its pronounced now.
5) One of the patrons at the hotel who is cheated by Jose Gomez - Joe Biggs - is shown to be from Pineapple, Oklahoma. But I couldn’t find any such city in the map of US though. **Thinking**
Tags: critique by amateur, movies, reviews
Subscribe