Continuing with the critiques I started in 2015, here is the next in series – a book review.
Prologue: Go here
For review of all Perry Mason books: Go here.

Stars: 4 / 5
Recommendation: For everyone who have fetish for courtroom drama, this is the lawyer's case files that one would definitely want to read.

The Case of the One-Eyed Witness is the 36th installment of the Perry Mason series by Erle Stanley Gardner published in 1950. 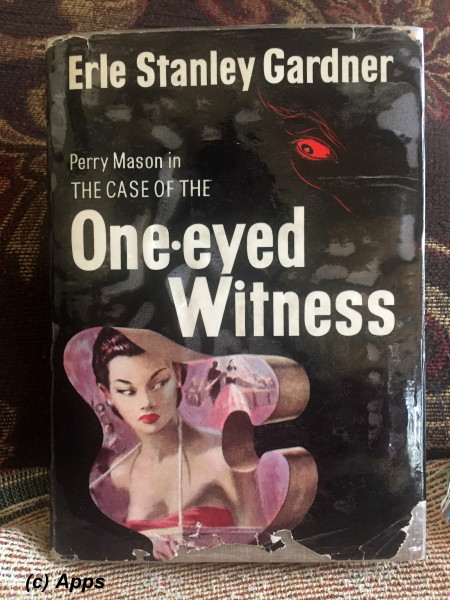 The case opens with a phone call that Perry mason receives at the restaurant he and Della were having dinner from a woman who urges him to go meet a certain Medford D. Carlin with a message to find a new partner and that a package with money and details were going to be delivered to him. While they were pondering on it, a cigarette girl at the restaurant drops by their table and inadvertently talks about her Japanese heritage and that a person posing as the father of her baby had released the baby in for adoption some four years ago.  A few hours after Perry Mason and Della deliver the message to Medford D. Carlin, Carlin's house gets burned down and a dead body is found in the house - who looks very much like Carlin. Firemen rule it out as a homicide and Lieutenant Tragg is assigned to the case. Why was Carlin killed? Detective Paul Drake's men had reported that they had seen a woman enter the house a little before the bomb went off. Who was that woman? Did she plant the bomb? Who was the woman in the first place who had called Perry Mason at Golden Goose restaurant? Are both these woman the same?

Baffled at how the events of the night were turning, Mason along with Paul and Della trudge forward in unraveling this very weird case, with Lieutenant Tragg hot on their trail - for whichever lead they turn up, that lead ends up getting killed. How will they unravel it? What will they find? Will they know who their client is eventually? Will she be the one to kill all those people?

The weird case of cat and mouse chase but in this case Mason chasing two mice - one his client and one the murderer - continues the rest of the plot. It is very interesting to see how Mason unravels all this although there are a few scenes that are very elaborate and could have been shortened. Other than that another successful Perry Mason mystery that thoroughly keeps you gripped.

1) The book being written in 1950, 9 years after the attack on Pearl Harbor by the Japanese, it was surprising to see still that the Japanese weren't treated well. Perhaps I shouldn’t be surprised at all.
2) I am always interested in learning the old English and do come across in period setting books or in older books. Some of them I came across here:
a. Chevy was spelled as "Chevvie" then. I suppose it got further shortened as years passed.
b. Mason uses the phrase "blue funk" to depict the depressed state of the caller on the phone.
c. Bird dog - another phrase not commonly used lately, meaning a gun dog trained to retrieve birds.
d. I have heard "act your age" being used a lot, but never "be your age" which I see it being used in this book.
e. One of the characters Celinda Gilson uses the phrase "you're trying to thimblerig something…". The word thimblerig made me pause and look it up. Per Wiki it is an olde world word for "Shell Game" or "Three Shells and a Pea". Very interesting history behind this word can be found here.
3) Some of the inventions that the characters talk about in this book seem so rudimentary now, yet they are the powerful ancestors of today's technology:
a. Two-way radio cars that Lieutenant Tragg finds a great invention.
4) Lieutenant Tragg uses the phrase "Elemental, my dear Miss Street" which so close to "Elementary, my dear Watson" used by the famous fictional detective Sherlock Holmes. Of course it is said that he never used that phrase although one has to read all works of Sir Arthur Conan Doyle to see the truth. I am digressing now. But what I was trying to point out is that Erle Stanley Gardner mimicked the phrase in this book. :)
5) Grammatical / Historical / Location / Character Errors:
a. On Pg. 83, fourth line from top, there is a word "se" in the beginning which doesn’t connect to the previous word in the sentence above nor the word next. Wonder what the author wanted to mention here.
6) The TV episode based on this book had quite a few changes yet kept the basic essence of the case:
Tags: books, critique by amateur, perry mason, reviews
Subscribe