Stars: 3 / 5
Recommendation: Are you afraid of the dark? Well you will be once you read this thriller - nail biting and bone chilling.

Are You Afraid of the Dark? is the last novel by the amazing thriller writer Sydney Sheldon and was published in 2004. The main plot revolves around a Think Tank, people from there either dead or missing and two women who set out to find the truth behind this unrelated (or related??) incidents. 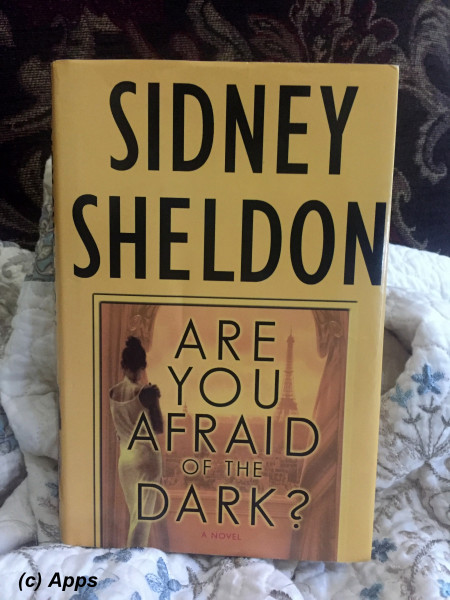 Four people come across weird circumstances that lead to their death or go missing - Sonja Verbrugge in Berlin, Germany; Mark Harris in Paris, France; Gary Reynolds in Denver, Colorado and finally Richard Stevens in Manhattan, New York. Sonja was warned by someone called Franz and her husband was talking to someone about stopping Prima. Mark Harris and Gary Reynolds were ready to go to Washington in connection with Prima. The police find  a note about a meet in Washington with regards to Prima in Richard's pockets.  Sonja is missing from the scene of her near -death accident. Mark's body is found at the foot of Eiffel Tower. Gary's flight suddenly gets pulled into a vortex of wind although the Denver airport authorities don’t see that on their radar. Richard's body is washed up along the East River. Who is Prima? What was supposed to happen in Washington?

Manhattan South Homicide Squad - Detective Earl Greenburg and Detective Robert Praegitzer - catch the case of Richard Stevens. They had heard his name in connection to his wife Diane Stevens who was going to testify against the boss of all the bosses - Anthony "Tony" Altieri - in the murder trial. Was Richard a mob hit instead? Richard was working for KIG - Kingsley International Group - a large think tank. Was the think tank linked in anyway? Diane comes close to being shot at point blank by someone. Why was Diane being marked for a hit? Why was Richard's body cremated when Diane wished for an open-casket funeral? Kelly Harris - Mark Harris's wife - a well-established and successful model also has a near-death experience when she almost gets killed in an elevator accident - only that she doesn’t take the elevator that moment. Someone had deliberately caused the cables to be cut and instead of her, her neighbor is killed. Who wants to eliminate Kelly? Lois Reynolds - Gary Reynolds's sister - was found dead a few hours after Gary's flight went down -  apparently killed in her home that burned down. Was her death a murder and related somehow to what happened to Gary?

They find connection between these four cases and two past cases linking all of them to KIG owned and run by Tanner Kingsley. Diane And Kelly are also called in to speak with Tanner where they meet for the first time. After they meet Tanner individually, both of them are almost killed at a restaurant and later Kelly is almost abducted. Was the mob head Altieri has anything to do with this? Why would anyone want to kill them both? They team up together reluctantly to find out why someone was trying to kill them. And who iwas behind their husbands deaths and all the other killings.

The prologue starts with so many questions that one gets  gripped to the book instantly. Although it felt like a "Game of Thrones" book where after a few chapters charcters that we thought would be primary gets removed. Sidney Sheldon has touched a very powerful subject with a plot that builds the reader upto it. It gives us a brief glimpse into what could happen if this occurs in reality. Perhaps it is occurring now and which is all the more scary. If only brilliant minds used it for the greater good.

All in all another masterpiece from the great thriller writer.

1) There is a Canadian Horror TV Series with the same name (More about it here) and books written based off of this TV Series (More about the book series here). The TV Series aired on Nickelodeon in 1991 through 2000. While the book series started in 1995.I have neither watched the TV Series nor read the books but I am not sure if they relate to the novel in question here.

2) This being written in 2004 a lot of technology that is talked about is new then but we take it for granted now. And it doesn’t seem too far in the past either. Technology has jumped pretty fast pretty soon indeed.
a. Nano Technology
b. Ability to view and hear people across the globe by sitting in one's office on television sets - monitoring of people's activities
c. Global Positioning System - GPS
d. Sound Spectrograph - a machine that can recognize thousands of different voices.
e. Internet Cafes - That I remembered using them too…but now it's in the palm of your hands. :)
Tags: books, critique by amateur, reviews
Subscribe