Stars: 3 / 5
Recommendation: Baseball and Murder seem made in heaven in this sports themed plot that is perfect for any sports fan.

Disclaimer: I have very little knowledge on baseball. Any mistakes in my review are my own misunderstandings of the game. Apologize in advance to those diehard fans. :)

In 2016, Chicago Cubs - the American professional baseball team based in Chicago, IL - made history by winning the world series ending a 71-year National League pennant drought and a 108-year World Series championship drought. To mark this success, what better way to post a book on Cubs than anything else, right! And wouldn't it be sweeter if it was a fiction - a murder mystery in that? Exactly my thoughts. :) And incidentally a garage sale a few months ago got me this book titled "Murder At Wrigley Field" - absolutely perfect for honoring the Cubs. And here is my review on the same. 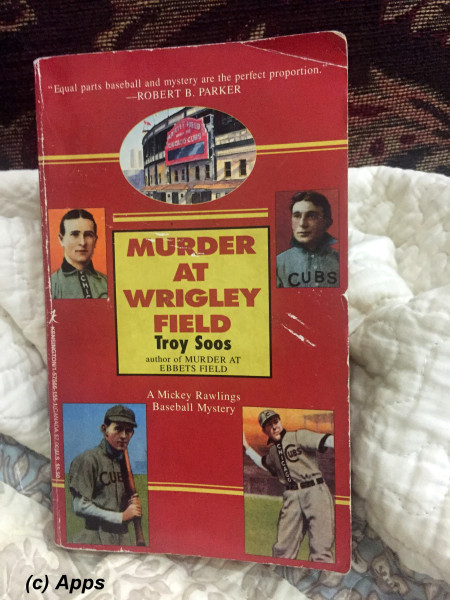 Murder At Wrigley Field is the third book in the Mickey Rawlings Historical Baseball Mysteries by Troy Roos first published in April of 1996. The series is predominantly set during the years 1912 thru 1922 and includes real ball players as characters. The plot for this opens in 1918 when the war in Europe was taking a toll on baseball - players were leaving for military service, sandlot players too young and old-timer too aged were filing the lineups, Secretary of War Newton D. Baker was threatening to shutdown baseball and ball players were using bats as mock rifles and practicing march past afraid that Kaiser Wihelm would attack from north-side of Chicago. With such an atmosphere, Chicago Cubs pitted against St. Louis Cardinals lost 3-1 to Cardinals despite the explosive strength of Willie Kaiser and the twin killings that Kaiser-to-Rawlings-to-Merkle was at pace.

Mickey Rawlings was given Willie Kaiser as roommate when Willie joined Cubs and from then he had been protective of Willie. With his infamous last name in such a war time Willie was the butt of several people's crude jokes and jeers including his teammates - one Sammy "Wicket" Greene in particular. Fred Merkle and Mickey intervened when needed. That was not the only trouble for the Cubs. Someone were tampering with the games - bleachers breaking through, smoke bombs that gave no fire but ample smoke, putting pretzels on all the concessions stands creating chaos about serving German food and hot water tanks being sawed off the ball players homes. Charles A. Weeghman - President of Chicago Cubs - gives the task to Rawlings to investigate if someone on the inside was trying to sabotage his business. Despite his reluctance, Rawlings accepts the job as Weeghman threatens him with Work or Fight order by Secretary of War - to avoid war he takes up this investigation so he can have work as a ball player.

Who could be causing these sabotages? Is it really Wrigley? Or was it one of the other partners in the syndicate? What was with Willie Kaiser? What is it he was hiding from Rawlings? While Cubs and Cincinnati Reds were on field at the opening ceremony for the July 4th game, Willie Kaiser gets shots in the chest. Horrible as the shooting was, Rawlings was surprised to see less news coverage about it in any of the newspapers and also the news being very identical. Who was trying to curb this news? What happened to his reporter friend Karl Landfors whose reports have suddenly stopped printing? Is there a connection between all these incidents and the war? Curiosity took the better of Rawlings and he starts investigating all these specially from Willie's murder angle. Ofcourse, Edna Chapman - Willie's step-sister - had urged it upon him too. As his prodding progresses, he finds that Willie was employed at Dearborn Fuel Company - Bennett Harrington owned it. Why did Willie need to work there as well as be a ball player?

I liked the way the author used baseball terminology to describe Rawlings visit to First Trinity Lutheran Church - comparing the way the Church was set to the how a Ball Park would be set. Mixing Baseball with Murder was not the only thing that the author touches. He outlays the politics between the owners of a team, causing mishaps due to the rivalry, going to any extent, forcing the players to do or die and above all still get the pennant at all costs. The game is not just a game anymore - it truly is a war very much on the diamond as it is on the front in France.

Well written with a few ramblings here and there - mostly because I couldn’t always follow the baseball analogy. An interesting read though that perhaps any sports lover would love to read.

Spoiler Alerts:
1) Charles Weeghman was one of the founders of the short-lived major league baseball organization called the Federal League, founder of Chicago Whales and built the ballpark called Weeghman Park (1914 - 1920) which later became Cubs Park (1920 - 1926) and finally renamed as Wrigley Park in 1927. (More about Weeghman here)
2) William Wrigley that Weeghman suspects of sabotaging his business in this plot is actually William Wrigley Jr. who was part of the syndicate that Weeghman had founded after Weeghman's federal league folded to buy Chicago Cubs from Charles P. Taft. And so also in the plot except he is a suspect here.
3) The author alludes to a plot from a previous book where Mickey Rawlings is shot while playing at the Fenway Park, from which Rawlings came out alive. Having not read the other books in the series and going only by the titles I am guessing this is from the first book in the series - Murder at Fenway Park - published in 1994.
4) War creates so many walls. Author says in one context that music by Beethoven, Bach, Mozart and the likes - who are legends - was banned to play only because they came from German heritage. Language being banned. So sad and pathetic and very inhumane.
5) The author mentions that Jazz was just up and coming in Chicago then. And highlights about a jazz band called King Carter's Dixieland Jazz Band with colored people who had come up from New Orleans. Today Chicago is home of Jazz.
6) Mickey Rawlings and Edna Chapman watch the 1918 American film Tarzan Of The Apes several times in the plot. Another movie to my list added. :)
7) History behind Terrapin Park / Orioles Park is inserted into the plot making it a very interesting twist.
Tags: books, critique by amateur, games, reviews
Subscribe