Stars:  4 / 5
Recommendation: A mystery with the elements of comedy and thriller to it without having all the chills of a horror / crime movie making it a pleasant watch.

Dressed To Kill is a 1941 Crime Mystery Film and third in the Michael Shayne Detective films. Lloyd Nolan reprises his role as Michael Shayne and is co-starred by  Mary Beth Hughes and Sheila Ryan. The plot is based on the novel, The Dead Take No Bows, by Richard Burke and the character Michael Shayne was created by Brett Halliday (as mentioned in the opening credits as well. For Halloween that falls on October 31st and celebrated in U.S.. Of A. I had wanted to pick a scary or horror movie. However, I chickened out (yes! I did. :)) and eventually settled for a crime mystery. After searching a while on google, netflix and youtube I settled on to this movie purely based on the title. It reminded me of a quote on my friend used to tell when I was in college - You have to always be dressed to kill. We used to call him "Mr. DTK". :P So, this movie review is in his honor as well.

The plot opens with Michael "Mike" Shayne renting a suit for his upcoming wedding with singer Joanne La Marr (portrayed by Mary Beth Hughes), only to get advice from everyone he crosses to think twice about it - Smile Joe Bishop the suit rental shop owner (portrayed by Emmett Vogan), Jack the Theater Manager (portrayed by Nestor Paiva, Hal Brennon the hotel manager (portrayed by Charles Arnt. He is a very under-paid private investigator who just wants to marry Joanna and live happily ever after. However fate, rather his penchant to solve a puzzle, has other plans for him.

Just as Joanna and Mike are heading out to get married, they hear a scream from the above floor of the hotel in which Joanna had a housing as well as worked as a singer in the adjoining theater. Hotel maid Emily (portrayed by Virginia Brissac) finds producer Louis Lathrop - owner of the hotel and the theater - and Desiree Vance (one of Louis's actresses) very dead. Weird part is both are dressed in medieval costumes and Louis even has the head of a dog costume over him. What were they doing literally Dressed to Kill? And who murdered them? While making a deal with a newspaper editor, Mike finds a half-torn and partially burnt note that shows a Julian Davis (portrayed by Henry Daniell) had received a certain amount of stocks from Louis that amounted to a considerable amount of money. Was it Julian who killed them so the note will not be discovered? He then finds the maid Emily trying to take a framed photograph with a love note and signature from one Lynne Evans. Why was Emily trying to take that photograph? Was she somehow involved in the crime? Mike's mind is all boggled with all the questions and is all set to solve the crime as the editor promised $400 if he pinned on the murderer - and keeps his bride-to-be waiting in her suite.

As the investigation by Mike as well as Police Investigator Pierson (portrayed by William Demarest) along with his detective Al (portrayed by Dick Rich) proceeds, they find very interesting facts along the way. For instance - that both Louis and Desiree were wearing the same costumes that were part of the only hit show by Louis - Sweethearts of Paris; that Desiree was the lead actress for that show; that Carlo Ralph (portrayed by Erwin Kalser) was Beppo the Dog; Could Carlo Ralph have been the killer since Louis is found with a dog head? Not only Carlo but all the actors of that show come under the spotlight of investigation conducted by these two along with others - David Earle (portrayed by Charles Trowbridge), Julian Davis, Angus Duncan, Fay Dalrymple, Max Allaron (the musician of the show who is now broke, drunk and lives at the hotel as well), Martin Larkin (the writer and lyricist of the show), Helen Hollis, Otto Kuhn (the doorman of the hotel), Connie Earle (portrayed by Sheila Ryan) the daughter of David Earle and Phyllis Lathrop (ex-wife of Louis). The plot thus proceeds on finding who killed these two, why and what was the motive, all the while poor Joanna waiting for Mike in her suite. Will Mike get married in the end? Will he solve the puzzle?

Plenty of comic twists melded with the mystery turns that keeps you interested. Of course the goofiness of Michael is not lost on the viewer and perhaps that is what makes him so charming unlike any other fictional investigator. A plot that certainly keeps you up on the edge as well as entertained with some timely comedy along with chilling moments.

1) Another author and book adding to my collection of books I need to read - Richard Burke and his book The Dead Take No Bows.
2) Lloyd Nolan reminded me so much of Ralph Fiennes - the mannerisms, the voice, the quick wit he portrayed for the character he played - everything reminded me of Fiennes. I wonder if they were related somehow.
3) Note that the doorman of the hotel is named Otto Kuhn while Fujimoto - the Houseboy of Julian Davis - was portrayed by an actor named Otto Han. Very interesting. :)
4) Mike Shayne talks about lipsticks that don't come off on glasses. Oh how I would love to have that kind of lipstick. :)
5) When Mike re-enters the dining room with Hal Brennon again, notice that the dead woman blinks - her eye is barely seen through the candlestick at the bottom right of the screen. 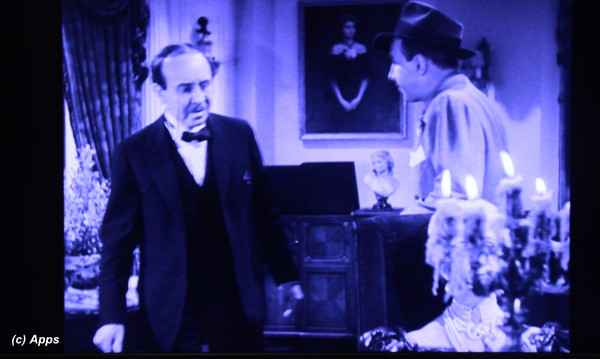 6) There is only one soundtrack in this movie - I've Got You All to Myself. Written by Ralph Rainger and Leo Robin and Sung by Sheila Ryan herself. There is a cute little dance performed by the two street cleaners - Rusty (portrayed by Mantan Moreland) and Sam (portrayed by Ben Carter) to this song by Joanna playing in the background.
7) There were 12 Michael Shayne detective films made. Something to add to my list to watch again.
8) Three radio shows and one television series was also made based on this series.
Tags: books, celebrations, critique by amateur, events, festivals, reviews
Subscribe