Stars:  4 / 5
Recommendation: Entertaining and also giving us the knowledge of mythology with hidden facts.

October 30th 2016 marked the day when Indians all over the world celebrated Diwali last year. Diwali - festival lights - is a celebration of good over evil and has many mythological references as to why this festival originated in the first place. One such is shown in this 1960 Telugu (Indian Language) hit classic Deepavali ( = another name for Diwali). The film had a cast of veteran actors and actresses - N. T. Rama Rao, Savitri, Gummadi, Krishna Kumari and S. V. Rangarao in various roles. This time the mythological reference is to the killing of Narakasura ( = a demon) by Goddess Kali. 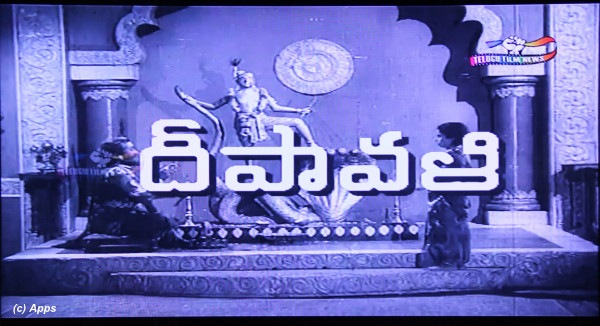 The story opens with Narakasura (portrayed by S. V. Rangarao) doing great penance to please Lord Shiva who then appears in front of him and grants him the boon on unprecedented strength, power and immortality - caveat being he will be killed only by his birth mother, Mother Earth (traditionally Mother Earth is depicted as a living human being in Indian Mythology). He asks this boon to fight against the Devas (minor Gods in Heaven) who have been waging war against the Asuras forever. In the arrogance of gaining power Narakasura attacks Indra and his empire in heaven taking over it. And kidnaps the mother of all Devas - Aditi (portrayed by Rushyendramani) - to her prized possessions of kundalalu ( = gold earrings). Aditi curses him in return that since had insulted a mother and a woman, there will be grave repercussions that he will face. Ignoring her he loots Amaravati (land that Indra rules in Heaven), kidnaps all the Apsaras there. And he continues looting the human world too, causing harm to everyone he crosses. Unable to tolerate the atrocities Narakasura is waging in Heaven and Earth, Indra and the Devas approach Lord Krishna on the advice of Narada Muni (portrayed by Kantarao). And so does the people who have been wronged by Narakasura urge Lord Krishna to aid them.

Here are the songs from the film:

Although the online version had few editing defects, this is another well-made movie keeping within the mythological facts and yet thoroughly entertaining.

1) L.Vijayalakshmi has a dance number in the film for the song Orimigonuma Na Rajashekhara. It is in the song list above.
Tags: celebrations, critique by amateur, events, festivals, movies, reviews
Subscribe