Stars:  5 / 5
Recommendation: A perfect medley of comedy, horror, romance and music that will keep you glued to the screen.

Prema Katha Chitram ( = Love Story That is Funny) is a 2013 Telugu (Indian Language) horror-comedy movie. It stars Sudheer Babu and Nanditha in the lead roles. The plot basically is about four youngsters who come to a farm to commit suicide because they have failed in their lives. But then if that was it then it wouldn’t be a horror movie, isn't it. So, enters the ghost. And the rest of the movie follows the way they deal with the ghost. 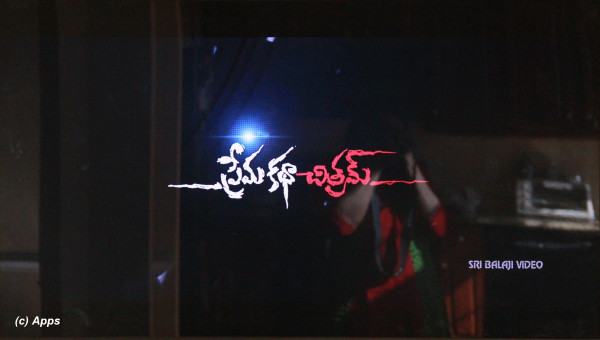 Yes, yes, people, I watched a horror movie again. But this time I was tricked by my friend that this was a comedy more than horror and so I watched and hence the review here. :P And I must say I liked it very much.

Sudheer (portrayed by Sudheer Babu), Nanditha (portrayed by Nanditha), Praveen (portrayed by Praveen) and Giri (portrayed by Satpagiri) plan to combine a flawless suicide. But they want to fulfill their last wishes before they do - Nanditha want to steal a new car, Sudheer want to slap a local MLA, Praveen wanted to always be in a car chase. After fulfilling Nanditha and Sudheer's wishes, both of them along with Praveen escape on the stolen jeep to a farm house. Praveen being the common friend for both Sudheer and Nanditha, he designs an elaborate plan for committing suicide. But he secretly hopes that both Nanditha and Sudheer would come out of this stupid plan of committing suicide and instead find each other. They are joined by Giri along the way to the farm house. But neither of them know what is in store for them in that farm house.

Knowing the past of Nanditha, Praveen doesn’t want her to die. So he proposes to post-pone the suicide for three days. They all get to know each other well. On the end of the 3rd day, Nanditha doesn’t want to still commit suicide and doesn’t want Sudheer also. Praveen suggests her to kiss Sudheer so his mind gets diverted out of the idea. Then enters the ghost - Lakshmi - who takes over Nanditha's body and scares them. The movie continues showing the perils of them with the ghost, the antics of the other residents of the farm house and trying to find why the ghost is haunting the house and them.

Why do Sudheer and Nanditha wanted to commit suicide? What are the reasons for Praveen and Giri to be part of this plot? Was Praveen intentionally setting up Nanditha and Sudheer? Does Nanditha love Sudheer from the beginning? Who is the ghost? Why is she entering the body of Nanditha and scaring everyone? What is the reasons for Watchman, Saidulu and Pedda to scare these people away? The plot continues revealing more than what eye meets.

The movie opens with an introduction about suicide and how the current generation has no value for life and are committing this grave sin for mundane reasons - failure in exams, failure in love, to terrorize the parents. There is so much truth in this and the director uses this tragedy into a horror and comedy mix plot that hopefully sheds some light on the generation who takes their own life so easily.

Comedy is very well blended with Horror. Two contrasting emotions are shown excellently by the director without having either one overpower the other. The actors have all lived their roles well. Sudheer Babu incidentally is the brother-in-law (by marriage) of actor Mahesh Babu and also a professional badminton player. However his acting reminds me so much of another actor Srikanth. This movie is the second movie for both Sudheer Babu and Nanditha albeit them working together first time. Nanditha's acting is superb especially when she acts as a possessed person.

The soundtrack of the movie is enjoyable enough. Music composed by J. B. and Lyrics penned by Veturi Sundararamamurthy, Kasarla Shyam and Karunakar. Veturi had passed away in 2010 three years prior to this movie. Playback Singing provided by a myriad of young singers - Lipsika, Revanth, Malavika, Rahul Sipilgunj, Deepu, Ramya Behra and J. B. Yet the credits show his name although posthumously for one song that has been used in the film. Again it’s a song from veteran actor Krishna and the beautiful Sridevi. The original song Vennelaina Chikataina is from the 1985 film Pachani Kapuram ( = A Happy Family). Another reason to thank Krishna. Here it is remixed with the same lyrics, new tunes and new singers. The original song that this remix was based on:

Here is the entire playlist from this movie:

A low-budget movie that not only entertains one but also pleases the viewer in the form of comedy, romance and horror all culminated into one beautiful picture. It's on youtube if you haven't watched it yet. Trust me it will not bore you for a single moment.

1) The film was remade in Kannada as Chandralekha with Chiranjeevi Sarja and in Tamil as Darling with G. V. Prakash Kumar.
2) The opening of the movie has the song "Ee Gaalilo" from the 1998 Telugu film Agni Parvatham ( = Volcano) starring veteran actor Krishna and Vijayashanthi. Sung by S. P. Balasubrahmanyam and S. Janaki the song certainly sets the tone of the film. Here is the original version of the song.

Perhaps the director thanks Krishna at the beginning of the film for this very reason as he used this song of Krishna in the movie. 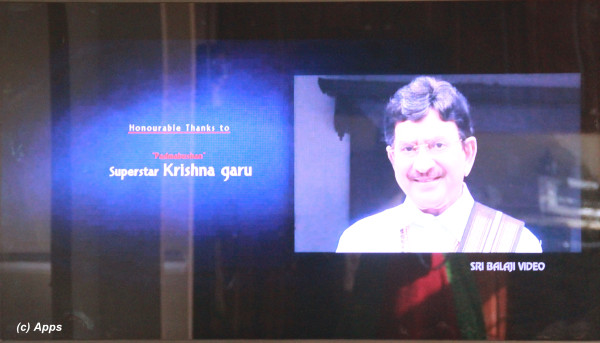 And another movie adding to my list for reviews
3) The director also thanks Mahesh Babu - Son of Krishna and also a famous actor - as the audio launch for this movie was done by him. 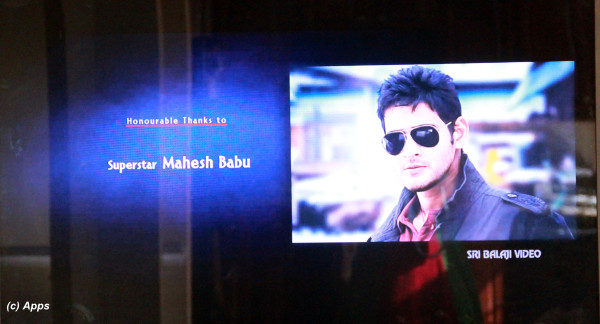 4) Check the long shirt worn by Giri. He says that someone's shirt was in the closet so he wore but perhaps it was a large size so it is coming to his mid-thighs. But If you see closely you can see that an additional piece of cloth is stitched at the bottom to make it look big. Clearly an editing and costume error. 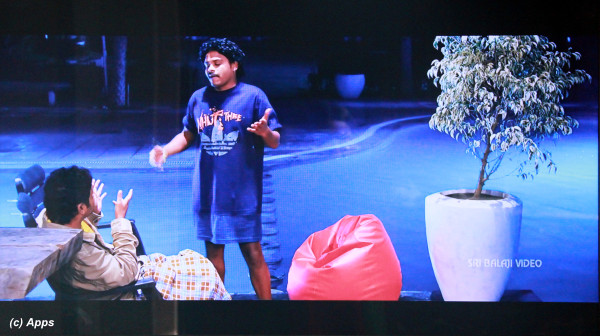 5) Pachani Kapuram is another movie that is pending for my review. It ties into old Telugu and Hindi movies as well as their remakes. A review that will be one within another.
Tags: critique by amateur, movies, reviews
Subscribe