Stars: 4 / 5
Recommendation: Gives you a glimpse into how the author evolved over the years as we travel through her short stories.

Death Wears A Beauty Mask And Other Stories is a collection of short stories by Mary Higgins Clark published in February of 2016 (paperback version). It includes 10 stories starting from 1958 upto 2009, each showing how her flair towards mysteries and murders charm the readers and also how she evolves as a writer. 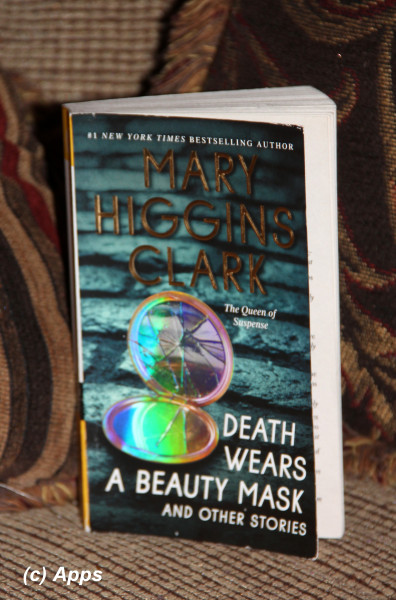 The First Story is titled Death Wears A Beauty Mask which, according to the author's note, she had started in 1972 and shelved it when her first book Where Are My Children? published and her career took-off. She finally finished it in 2015 but she retained the setting of the plot in 1974 itself. The plot of this story revolves around Michael Broad - a deputy district attorney in Los Angeles - and his new bride Janice  - who are trying to find what happened to Janice's sister Alexandra Saunders - a famous model - after she disappeared returning from her latest shoot of Beauty Mask. They find her that very night in her apartment strangled by a cord and very dead. Who killed her? And for what? The usual suspects line-up - Emma Cooper (the house keeper), Grant Wilson (the owner of Wilson Modeling Agency), Larry Thompson (directs photo shoots and commercials) and Marcus Ambrose (owns the charter plane that flies Alexandra around the world).

The Second Story titled Stowaway was originally published in 1958 as "Last Flight From Danubia". It is about a stewardess - Carol - aboard an American flight from Danubia who hides a convict who escapes. Will the Commissioner of Police from Danubia who is also aboard the flight find the stowaway? Will Carol and Tom - the pilot - reconcile their differences and finally become one? Or will the stowaway cause a larger fissure between them? This is a very very short story of hardly 20 pages, that I felt abruptly ended. However, it is a simple mystery that gets solved easily.

The Third Story titled When the Bough Breaks was originally published in 1960. This is a really short story that didn’t go more than 10 pages. It is all about forgiveness and moving on after a tragedy for Marian Blane and Peter. Buckets of tears flowed through my eyes with such a simple plot.

The Fourth Story titled Voices in the Coalbin was originally published in 1989. The plot is about Laurie trying to get over her nightmares while her husband Mike helped her heal as they took a vacation at his grandmother's home. This one is right out of the Twilight Zone TV Series - give you chills through and through although the plot is not more than 18 pages.

The Fifth Story titled The Cape Cod Masquerade was originally published in 1994. This is an Alvirah and Willy Meehan tale. Though these characters first appear in the 1987 thriller Weep No More, My Lady; this perhaps was a short story that they were introduced again seven years later before a full-fledged novel that outlined Alvirah Meehan's penchant to solve crimes in the form of short stories - The Lottery Winner and Other Stories. This time she gets involved in helping Cynthia Latham who was accused of murdering her step-father 12 years ago and had gone to jail. She had profoundly believed that the one witness she had could help but could not find. Alvirah puts her brain to test again in helping Cynthia. This indeed is a murder mystery right up Mary's alley.

The Sixth Story titled Definitely, a Crime of Passion was originally published in 1996. This was published as "A Crime of Passion" in the book "My Gal Sunday: Henry and Sunday Stories" the very same year. The plot follows ex-President of US Henry Parker Britland IV and his Congress-elect wife Sandra O'Brien Britland while they try to solve the case of his former secretary of state - Thomas "Tom" Acker Shipman - who was indicted for the murder of his lover Arabella Young.

The Seventh Story titled The Man Next Door was originally published in 1997. The plot revolves around August Mensch, Bree Matthews and Kevin Carter where one of them is involved in a stalking and kidnapping case. A thriller that felt straight out of Criminal Minds TV Series long before the series even was aired on TV. A chill ran up my spine thinking how easy it is for one to disappear aka kidnapped. A master spun short tale again.

The Eighth Story titled Haven't We Met Before? was originally published in 2000. This plot is about William Koenig who is put in a psychiatric ward for attempted murder of Emily  Winters. But it also involves reincarnation - a twisted reason that William uses for his killings. However this plot reminded me of another Mary's novel titled On The Street Where You Live that was published a year after this short story.

The Ninth Story titled The Funniest Thing Has Been Happening Lately was originally published in 2002. The plot is about Fred Rand who goes on a vengeance spree against the people he considered who had caused the death of this daughter. The story although short delves very deeply into human psychology and there is nothing funny about it.

The Tenth and the last Story titled The Tell-Tale Purr was originally published in 2009. This is written in first-person mode. The plot is about a grandson who was waiting for his grandmother to die so he could get the inheritance, but he may have wanted to try to help that along a little sooner. This also I felt like one right out of Twilight Zone TV Series. Caused quite a few chills though not as much as it would have had it aired as an episode on the TV show.

Through these ten short stories we get a glimpse of how Mary's writing has matured over the years and her flair has marked the path. A very enjoyable read and pretty fast if I must say.

1) In the first story Death Wears A Beauty Mask, Grant Wilson - one of the suspects - lives in the same apartment house where Jackie Kennedy moved to after JFK's death.  And the author also briefly notes about the Watergate Scandal during President Nixon's regime.
2) Tip O'Neill - the 47th Speaker of the United States - is referenced twice in these stories:
a. In the story The Cape Cod Masquerade, Willy Meehan is compared to the looks of Tip O'Neill
b. In the story Definitely, a Crime of Passion, Henry mentions that Tip O'Neill had a nickname that suited him just right and so does Sunday suits for Sandra.
Tags: books, critique by amateur, reviews
Subscribe