The Evil Inside is the fourth book in the Krewe of Hunters series by Heather Graham and published in August of 2011. This time the plot revolves around Jenna Duffy - one of the Krewe of Hunters who is also a registered nurse apart from having the paranormal abilities - and Samuel Anthony Hall - Criminal Defense Attorney on the current case. 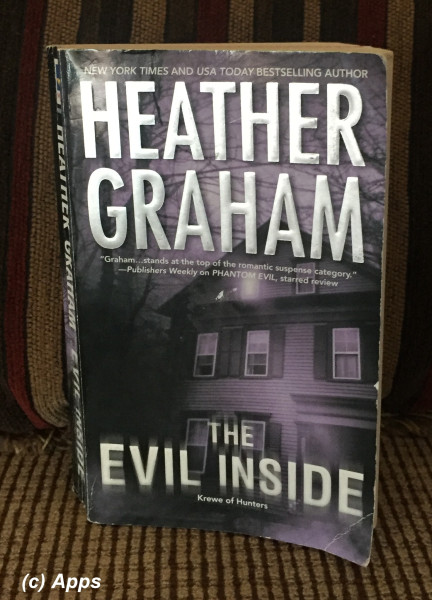 Samuel "Sam" Anthony Hall - a criminal attorney - while coming back for his first visit back home in Salem, MA when he almost hits a teenager covered in blood. When the paramedics and local cops arrive along with Detective John Alden, he realizes that the kid called Malachi Smith had just hacked his family and thus the blood on him. Malachi had butchered his father Abraham Smith, his mother Beth Smith, his grandmother Abigail Smith and great-uncle Thomas Smith. Incidentally Jenna Duffy - one of the Krewe of Hunters and a registered nurse - also comes to Salem, MA at the urgent request from her maternal uncle - Uncle Jamie. He had called her for her help to investigate the two earlier murders that were supposed to be done by Malachi but by the time Jenna arrived, Malachi was found soaked in blood after butchering his family. And now she is teamed up with Sam in doing their best to save Malachi and prove him not guilty just like her uncle believed.

Malachi Smith and his family had lived in the Lexington House which was famous for murders happening to whoever owned that. Could that history had anything to do with what Malachi did? Could the fanatical life that the Smiths lead had provoked Malachi finally? How are the previous two murders related to Malachi although police hadnt found any concrete evidence against him? Were the incidents Malachi had faced while at school have any bearing on his present situation?

As the teams investigate and get closer to the murderer, so also the attraction between Sam and Jenna increase. They act upon it, but will that be forever? Will Sam understand her for who or what she is? Will Jenna understand where Sam is coming from and what his role is?

The team of Jackson Crow, whom we met in the first book Phantom Evil (My review here) and all come with one or more paranormal experiences apart from their other abilities that would help investigating any case, consists of Jake Mallory (A wizard with computers), Whitney Tremont (expert with film, sound and video), Angela Hawkins (an ex-cop and has ability to speak with ghosts), Jenna Duffy (A registered nurse) and Will Chan (expert with film, sound and video). The local police firm that this team works with are - Patrolman Nathan Brewster, Patrolman Robert Bishop and Evan Richadrson (Sam's assistant).

The usual line of suspects - some who could be just points of interests - that both teams work with are: Jamie O'Neill (Jenna's uncle), Jimmy Chu (Sam's father's friend who had looked after Sam's home), Lila Newbiry (School counselor at the school that Malachi had attended), David Yates (One of the schoolmates who had bullied Malachi), Alison Chart (A Realtor), Andy Yates (Local Councilman and father of David Yates), Greg Mason (Andy Yates's secretary), Cindy Yates (David Yates's mother), Cecilia Sanderson and Ivy Summers (owners of store named A Little Bit of Magic), Samantha Yaegar (who was interested in buying the Lexington House), Milton Sedge (local grocer), Joshua Abbott (another schoolmate from Malachi's school), Goodman Wilson (Priest of the Old Meeting House) and Tommy Wainscott aka Merlin (A psychic reader).

Another chiller in the Krewe of Hunters series by Heather Graham. However, I must say it was a bit lesser chillier than the previous ones more because there was lot of leg-work and investigation that the teams do is shown rather than the actual chills. Also Jackson's team doesn’t come into the scene way until midway through the book. That was similar to her previous books where the plot focuses on the lead characters mostly.

All in all another chiller that gives you shivers in your bones with a soft touch of romance.

1) The plot in the second book Heart of Evil (My review of that book here), showed a distinct chemistry between Cliff Boudreaux and Jenna Duffy. I hoped to see a book in future featuring them both. Clearly author had a different person for Jenna in her mind Cliff Boudreaux disappeared after that plot was done. :P
2) The author gives her usual recipes from the location that the plot is usually set in. This time around she has three recipes from New England although I could perhaps only try one of them. :)
3) Grammatical / Historical / Location / Character Errors:
a. On Pg. 134, last para "kept a" is repeated twice.
b. On Pg. 219, 3rd para it should be "we all share…". An extra "share" is in the line.
Tags: books, critique by amateur, krewe of hunters, reviews
Subscribe