Stars: 3.5 / 5
Recommendation: An easy romance plot with the dangerous mix of murder and smuggling - what more does one want from a book.

I have read so many books mostly fiction and a few non-fiction. However, there are certain books whose plots keep coming back to my mind at the oddest moments in my life. One such book is this 1985 romantic adventure The Right Path by Nora Roberts. Something about this plot always grips me, haunts me and mesmerizes me. So it was only fitting to include it in my blog of reviews. 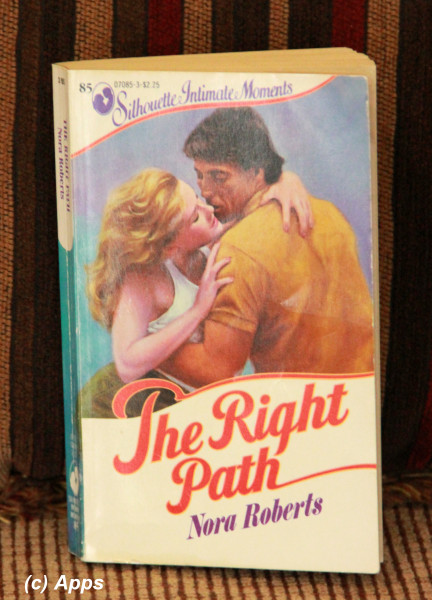 The Right Path was first published as part of the Silhouette Intimate Moments Series - Book #85 - by Silhouette Books in March of 1985. Since then this book has been published several times under several publications as recent as a Kindle edition in 2012 and also as part of combination with other Nora Robert novels. The plot revolves around Morgan James - an American visiting Greece - and Nicholas Gergoras - a Greek who is rich but with a dark shade. Which would be the Right Path that both Morgan and Nicholas take at the end is what the plot is all about.

Morgan James is on a much needed vacation in Isle of Lesbos, Greece, spending time with her friend Elizabeth "Liz" Theoharis  and her husband Alexander "Alex" Theoharis  - a millionaire settled in Greece. Her goal was to wind-down and get-over the stress from work as well as the nasty break up with her boy friend Jack. However, Liz has other aspirations - she would like to play matchmaker for Morgan just as she had played for her. However, the very first night Morgan comes across a rude and rough mixed-Greek man near the beach who drags her to the bushes, pins her down with a knife, instructs someone to follow someone else and dares to kiss her at the end. This stranger although looks dangerous and perhaps a criminal, Morgan feels deeply attracted and angry at the same time. Who is this man who thinks he can take whatever he want? And she came to know soon who this stranger was - Nicholas "Nick" Gregoras, another millionaire and next-door neighbor to Liz and Alex, established in olive groves and imports and exports. After hearing from Alex on how close the Turkey coast was from where they lived and about the frequent smuggling of all kind that goes on, Morgan couldn’t help but think that Nick could perhaps be involved, especially considering his recent business venture - imports and exports. Could he be a smuggler or a ruthless don?

And then Morgan stumbles upon the dead body of a villager- Anthony Stevos - close to the beach encompassing the Theoharis's villa and Nick's castle. Who had murdered that man and why? Was it related to smuggling that has gone so wild lately? Why is Alex so resigned about it? Is it because he is involved? And Dorian Zoulas - friend of Alex - seemed very excited about the concept of smuggling. But, Iona Theoharis - Alex's cousin - went deathly pale hearing about it and murder. Why did she react so? While Morgan tried to sort out these questions and see the truth, her heart and mind reacted differently to Nick. She couldn’t believe that Nick would be a smuggler and a killer. Yet, hadn't he been the one with the knife in the first place? But her heart instead has completely lost to him. How can she survive if her suspicions about him turn out to be true? In the midst of all these chaos she finds friendship in Andrew Stevenson - An American and cousin to Nick and a poet. But, will she turn to Andrew just because she was afraid to face the truth about Nick? And who is Stephanos in reality? Is he indeed Nick's caretaker or his partner in crime?

As the plot unfolds, Morgan gets answers to her questions - some surprising and some shocking - that satisfy her mind. But will she chose the right path that would lead to Nick as her heart wants only to find Nick on the wrong path? What will she do then?

A sensual romance plot with an edge of danger to it mixing smuggling and murder in the midst. This was a very early novel by Nora Roberts, and clearly one can see why she has become one of the very successful Romance Writers of America. An easy read and yet keeps you gripped till the end.

1) Grammatical / Character / Geographical / Factual Errors:
a. On Pg 152, Para 3, it should be "doorway back to her friend…" instead of "friends" for there was only one other person in the room other than Liz.
Tags: books, critique by amateur, reviews
Subscribe