Stars: 5 / 5
Recommendation: An epic condensed into simple language through the eyes of a bystander, albeit an important one, giving new meanings and deeper thoughts to the mythology that happened thousands of centuries ago.

Karna's Wife: The Outcast Queen is the first novel by Indian author Kavita Kane published in November of 2014. The author retells the mythologies in the form of fiction coming under the category of new-era authors like many others namely Amish Tripathi, Anand Neelakantan, etc. This fiction tells the story of Karna's wife Uruvi - who chooses to marry Karna over Arjuna knowing that Karna is a Sudra, thus crossing all the barriers of caste system that exists in India. A small drop in the ocean of the epic Mahabharata is the life of Uruvi, yet she carves a very important notch in the epic. I had never known who Karna's wife was although his life had been played in movies and plays a lot. So I was curious to read about here. And thus my review of the book. 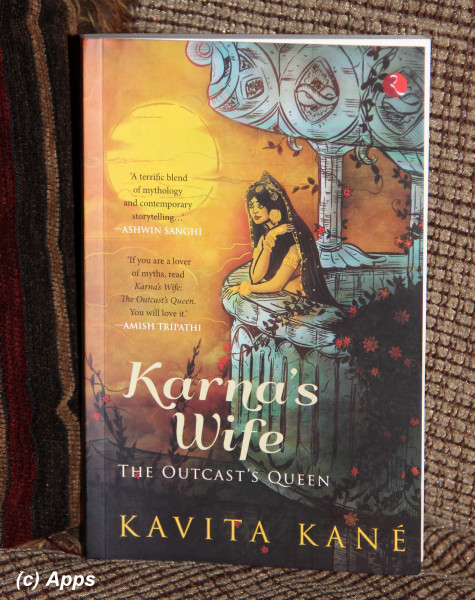 Uruvi, Princess of Pukeya, first saw Karna when he had come into the arena of the archery tournament in Hastinapur. It was supposed to be a display of skills between the Kuru cousins - hundred Kauravas and five Pandavas - of whom Arjuna - the third Padava - was excelling. Karna thwarted that little surge of success by doing everything that Arjuna had done, but with much more finesse. His bravery and finesse not only wins the heart of Duryodhana - the eldest Kaurava and Crown Prince who showers him the needed respect by making him King of Anga - but also Princess of Pukeya's heart. Uruvi was the only daughter of King of Pukeya - Vahusha - and Queen Shubra.

Uruvi also comes with her own skills and not just splendid beauty - she was enchanting, kind, brilliant, frank, tempestuous at times, wilful at other times and also has the innate ability to heal others which lead her to learn the secrets of ayurveda and healing. Yet, she always craved to be perfect, be like her father and also please him. But, now that she wanted to marry Karna - a sutaputra (the son of suta - one born of a brahmin mother and a khsatriya father)  - will she forever lose her father's pride if she insist on moving forward with her choice? But Uruvi's perception of Karna is so right - a good man trapped in a wrong situation; a wronged man. And perhaps the first person in history to go against the anuloma - the practice of marrying men of a higher caste than you - and support pratiloma - the practice of marrying men of a lower caste than you.

Karna was born to Kunti - Pandu's first wife - and Surya - the Sun God - before she was married to Pandu. She abandons him for she cannot raise a kid being unmarried according to the social customs. Karna is found by a Sudra man and is raised as a Sudra despite being a Kshatriya. Perhaps Uruvi and Duryodhana are the only ones who realize his potential and support him despite how he was raised. And perhaps Ashwatthama who as much loyal to Karna as his father Guru Dronacharya despised Karna.

And as Uruvi had outlined to her father the reasons, Karna indeed is handsome, brave, righteous, gifted and generous. But Karna had one serious flaw - his blind support to the evil Duryodhana even though he was aware of what Duryodhana was doing was wrong. Perhaps he accepted Duryodhana's evil deeds out of his blind love to his friend or for the way Draupadi had rejected him a her Swayamvara so he could avenge it through Duryodhana. Whatever the reason that blind support and love was a flaw. And will that one flaw become a bane for Uruvi if she marries Karna? By marrying Karna will she become a pawn in the cesspool of intrigue and deceit of Hastinapur? And all this defiance Uruvi does only based on hearsay and not actually knowing Karna. I am intrigued to see if Karna honors and protects her when he eventually marries her for he was already married with kids - his first wife, Vrushali, was a suta; for they would be facing far more humiliations than one person can face in future.

The rest of the book takes us through the journey of Uruvi as Karna's wife - settling in her new home; slowly gaining approval of Vrushali and Shona (one of Karna's younger brothers) - despite her jealousy towards Vrushali; winning the heart of Karna eventually; surviving the scorn from all of her royal friends and families she had grown up loving; learning the truth about good and bad just as Bhishma Pitamaha had explained; realize the game that Duryodhana is playing just like she was warned by her parents and Bhishma Pitamaha; understand the hunger that Karna has - to be accepted above his caste and only by merit- because of which he is blind-sided; understand his need to see only good in even what is bad; learning of Karna's vehemence towards the Pandavas, albeit misplaced; learning of his curses; revelation of who is true parents were; his unwavering support to Duryodhana during the battle and finally his death at the hands of his arch-rival Arjuna.

The author brings out the evil side of Pandavas that normally is not highlighted in movies / TV shows / stories based on the epic Mahabharatha - being the Princes of Hastinapur they taunt and humiliate Karna based on his caste, perhaps this is one thing that Duryodhana has the higher hand over Pandavas as he whole-heartedly welcomes Karna into his life despite his stature; how Arjuna was jealous of Karna in every which way; cruelty that Drauapdi shows towards Karna and his dead son Sudhama; cold snubness by Draupadi towards Karna and Uruvi.

It amazes me that even though Lord Ram Chandra had practiced and preached "one man one wife" policy in the Treta Yuga, when the world reached Dvapara Yuga during the period when Lord Krishna was supreme, men still had multiple wives. Even in this Karna openly says he is happy with his wife Vrushali but only the rejection and humiliation caused by Draupadi had stopped him from going to swayamvaras. Why would he want another wife when he was happy with one and who also gave him kids so his lineage progressed? Even Arjuna though married to Draupadi had loved Uruvi and wanted her for his wife. Why would he need another one? One fight that Karna fought all along was to have caste-equality in every aspect for until recently Brahmins, Kshatriyas and Vysyas were considered superior castes and Sudras aka Sutas were the lowest caste with few benefits. Alas the tides have turned in the 20th and 21st century - for now the Sudras are the ones rich and privileged thanks to the laws that they misuse so well and the politics that helps them. I am not saying everyone does it, but I am saying that the superior caste are the under-privileged now.

Author also opens new avenues on how King Pandu died or why Madri jumped in her husband's pyre despite six-month old twins she had - if all of it was part of a bigger plan by Shakuni. Another avenue that the author raises is perhaps the elopement of Arjuna and Subhadra caused to be another reason for Duryodhana to hate the Pandavas cause he was supposed to be married to Subhadra. There is so much different side of Kunti shown by the author that I wonder if she would write a book on Kunti too.

As opposed to other mythological-fiction writers like Amish Tripathi - who humanized the epic fictions - or Anand Neelakantan - who brought out the other side of a character in the epics that we know only one way - Kavita Kane simply brought to life the hidden, forgotten or lost characters. There is no embellishment of any one character, but simply retelling the epics through the eyes of these behind the scenes cast, if one can say. Here she tells the key plots of the epic Mahabharat along with exploring the life of Uruvi, seeing the story unfold through Uruvi's eyes and thoughts. That is why perhaps the story opened many avenues of thoughts that otherwise one would not think of.

By retelling the tale through the eyes of Uruvi, the author has managed to put positive spin on the losing side of the battle as well as the heart and soul of Kauravas - Karna. However, does it make anything better. The evils and ploys were first started by Queen Satyavati - second wife to King Shantanu, Bhishma's father - that only magnified by the time Kauravas ended. Uruvi talks of Pandavas and Krishna using deceit in the war but Pandavas have been forced into it while her husband Karna had a choice which he chose to be on the wrong-side, no matter how many tried to dissuade, because of his blind loyalty to his friend and his craving to be recognized socially. That is the bane of Karna's existence that brought him down eventually despite all his goodness.

So much wrong has been done, so much right has been erased, so much evil has been quenched and so little good has won in the entire Mahabharat. It is not easy to put the epic into simple words, straight forward language and yet giving it the deepest meaning that that epic gave. The book let me with so much empathy towards Karna whose life could have been a better one if one person had the courage to speak up and few others had pushed to let the truth out. He was the thread that could have tied both Pandavas and Kauravas together and eliminate the entire massacre of Kurukshetra. But it happened and hence we read it now. Yet, it wrenched my heart very much - could not forget the book for a few days at least.

A well-written version that definitely gives a soft spot towards Karna and shows his life in a new light, albeit the light is shadowed still.

Last but not least, being in US it is rarely that I get to read about new authors from India or much less their books. So, Thank you dear friend, Prathibha, for introducing me to another Indian author.