Stars:  3 / 5
Recommendation: A decent spy movie that you can watch lazing on your sofa without trying to understand too much about the plot.

The November Man is a 2014 American action spy thriller movie starring Peirce Brosnan, Luke Bracey and Olga Kurylenko. It is based on the novel There Are No Spies by Bill Granger which is the seventh book in the November Man Series. The plot basically pits Pierce Brosnan against a young operative, Luke Bracey, whom he had trained five years ago. In 2008 CIA agent Peter Devereaux (portrayed by Pierce Brosnan) is supervising a young operative, David Mason (portrayed by Luke Bracey) in a mission in Montenegro. However, Mason disobeys Devereaux's orders and while shooting an assassin kills a child. Five years later, Devereaux is retired and living in Lausanne, Switzerland when his former boss John Hanley (portrayed by Bill Smitrovich) approaches him to extract Natalia Ulanova, the aide of Russian President-elect and former Army General Arkady Fedorov. Natalia had broken into Fedorov's safe and had copied all the documents they need to prove of his war-crimes during the 2nd Chechen War. CIA who was extracting her is unaware of Devereaux being in the mix while the FSB (The Federal Security Service of the Russian Federation) also was chasing her on orders of Fedorov. But the CIA station chief gives orders to kill Natalia so she doesn’t fall into Russians hands. Unaware that Devereax had rescued Natalia from the FSB, Mason shoots her on orders. She dies giving the proof to Devereaux - her phone - and a name. What Devereaux doesn’t understand is why was she shot when he - a CIA operative - was extracting her just like the other CIA agents?

Devereaux intercepts the CIA vehicle and kills everyone only to face the sniper who turns out to be David Mason who had disobeyed his orders five years ago. They don’t shoot and walk away. 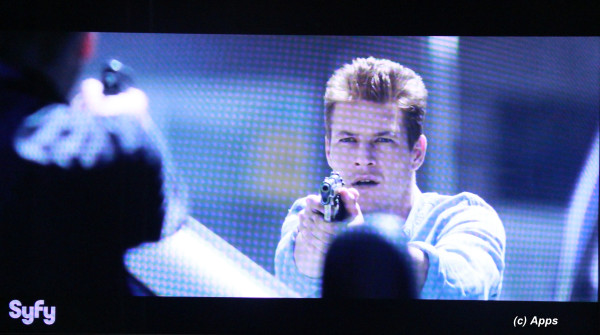 In a parallel plot, a New York Times journalist Edgar Simpson approaches refugee case worked Alice Fournier (portrayed by Olga Kurylenko) to write an expose on Fedorov's war crimes. Alexa, an assassin comes to know of this meeting. However, Devereaux arrives at the same time and rescues Alice and Edgar from the assassin - he gets Fournier as the only contact of Mira Filipova from the information that Natalia shares before she dies. Since he had shot three CIA agents, CIA station agent puts an order to terminate Devereaux cause they know that with the way he is wired he doesn’t spare anyone who had hurt anyone he loved. And Mason is assigned to the act.
The chase begins - CIA hunting Devereaux to terminate, Devereaux with Alice on the run and saving her, the assassin Alexa hunting both Devereaux and Alice, And the plot continues taking us into intriguing spy activities of CIA, trying to save people that have proof, exposing Federov if possible and at the same time escaping the FSB. How Mason and Devereaux are pitted is very interesting to watch as the plot unravels. Who are Alice and Mira are also revealed. But the most surprising twist was to reveal the CIA operative who was playing double agent and foiling the attempts as well as playing a key role in Federov's war crimes. What are the war secrets that Federov and this CIA operative are trying to hide so desperately?

Pierce Brosnan has not lost his touch as an agent since his days as Remington Steele or later as James Bond 007. He even drives a Bond car in this movie as well. The plot is filled with double-crosses and sudden changes that ultimately lead to one goal. Although it was interesting, it did feel a bit cramped up. However, I liked it, as I am partial to Pierce Brosnan. If not for Pierce Brosnan, this would definitely be a disaster. Since I didn’t watch in theater cannot compare with the big screen either. It is a decent watch from my sofa nonetheless.

1) I haven't read any of Bill Granger's books, but after watching this movie, I am adding him to my list of authors to read.
2) The plot shows that Devereaux and Natalia might have had a relationship by the way he hugs her and kisses her when she dies. And that she is his daughter, Lucy's, mother.
3) The character, John Hanley, explains why Peter Devereaux is called as The November Man - after he passed through nothing lived; He was one bleak. Pierce Brosnan lives the role as The November Man to the dot.
Tags: critique by amateur, movies, reviews
Subscribe