Heart of Evil is the second book in the Krewe of Hunters series by Heather Graham and published in June of 2011. In this book the plot revolves around Jake Mallory - one of the paranormal investigators from Jackson Crow's team - and Ashley Donegal - Donegal Plantation heiress. 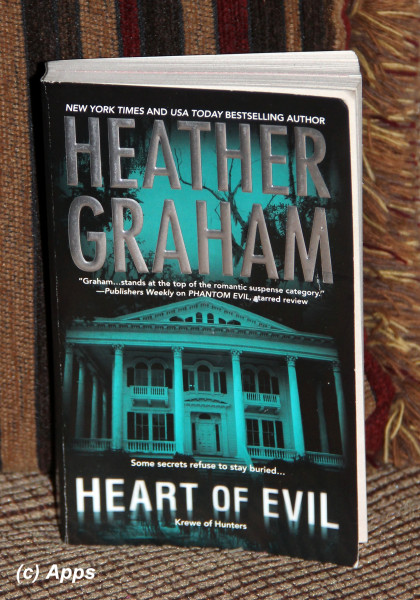 Ashley Donegal was getting ready for Donegal Plantation's biggest event - the re-enactment of her ancestor Marshall Donegal who was killed in a skirmish during Civil War. However, she has been having nightmares that dealt with blood, cemetery, war and Jake. Jake Mallory is now a member of Adam Harrison's Special Unit at FBI, a team head by Jackson Crow. His special abilities of interacting with ghosts, to be able to hear them has lodged him as a key member of the team. However, now he is plagued with nightmares showing his search for dead and live people in the aftermath of Katrina, only this time the center is on Ashley whom he always seems to be trying to save her from the hurricane right before he woke up. Does this mean Ashley is in trouble and need him now? The last time he had felt that, his special abilities had almost cost him Ashley.

As Ashley feared, after the Donegal Battle re-enactment, Charles Osgood disappears - he had portrayed the role of Marshall Donegal - and upon request from her grandfather, Frazier, Adam Harrison sends Jackson Crow's team to Donegal Plantation to investigate a disappearance. Will the history between Ashley and Jake impact Jake's investigative skills in anyway? What exactly happened that had pushed Ashley away from Jake? When the team arrive for investigation instead of finding Charles missing they find his dead body hanging from the Donegal Valut in the Cemetery in exact way how Marshall was when he was killed in the Donegal battle.

Apart from investigating the murder, the team also delve into the past, into the killing of Marshall. It was rumored that his wife Emma Donegal had taken that opportunity of the battle and killed her husband for his unjust behavior towards slaves and his infidelity that did not limit to the slaves on their plantation. Was it true, even though never proved? Emma had lived a sad life after Marshall's death looking after her four kids. However, was that connected to anyway what is happening at the plantation now? But who wanted Charles dead? Or more accurately who wanted to re-enact the death of Marshall to the detail using Charles? With his expertise in computer hacking and handling press for the team, can Jake unravel the mystery? Will any friendly ghosts from the past help them? Will Ashley finally accept that she is also unique like Jake? Who was behind this murder and why?

The team of Jackson Crow, whom we met in the first book Phantom Evil (My review here) and all come with one or more paranormal experiences apart from their other abilities that would help investigating any case, consists of Whitney Tremont (expert with film, sound and video), Angela Hawkins  (an ex-cop and has ability to speak with ghosts), Jenna Duffy (A registered nurse) and Will Chan (expert with film, sound and video). Jackson Crow's team join the local forces - Detective Mack Colby, Officer Drew Montague and Medical Pathologist Augie Merton.

A string of suspects line-up for Jackson Crow and his team during this paranormal investigation - Charles Osgood (one of the newer members in the re-enactment), Griffin Grant (CEO for a cable company in New Orleans), Cliff Boudreaux (the horse master at Donegal and a second cousin of Ashley), Toby Keaton (Ashley's neighboring plantation owner at Beaumont, his Creole plantation), Ramsay Clayton (an Artist and Owned a property down the road from Donegal's), Hank Trebly (Another neighbor of Donegal's who owned a sugar refinery), John Ashton (tour director from New Orleans), Beth Reardon (Ashley's friend and chef at the Donegal's), Dr. Ben Austin, John Matty Martin (the sutler and his wife), Frazier Donegal (Ashley's 83-year old grandpa), Justin Binder (a widower with twin girls Jeanine and Meg), Jerry Blake (One of the officers in Beaumont), Michael Bonaventure, Hadley Mason, Tom Dixon, Victor Quibbly, Nancy (Justin's mother-in-law) and Marty Dean (The television reporter and Jake's classmate at school).

It started a bit slow but picked up the pace faster later. Till the last chapter I could not guess who was the killer, although I am pretty good at guessing. :P One difference I found from the first book, are the interludes that author includes that are more like the ramblings of the killer but in an orderly fashion. These interludes certainly added a chill up the spine. The story has chills, ghosts, revenge, history, civil war references, love and pure human heart filled with evil. Another feather in the cap for the Krewe of Hunters who solve a case, albeit it had revealed some sad parts of the history in the Donegal generation that had been retold wrongly. And an absolutely delightful chilling crime thriller from Heather Graham - a master spinner at hand again.

1) Cliff Boudreaux and Ashley Donegal are related as cousins in a very very twisted way of several generations ago that mixed the races - Donegals and the Slaves back then - to bring them the current mixed raced men like Cliff - gold-colored eyes with bronze skin and tawny hair. Amusing to read history and how it changed the very making of genes.
2) The author has a quote from George Santayana on Pg 33 Para 2. Looking at his last name I thought he might be an Indian Philosopher. Turns out he is a philosopher, essayist, poet, and novelist from Spain. Very interesting last name. Wonder if they have ties to India going back generations. Anyways, here you can find more about him.
3) The book I have, came with two inserts about free books - you know where the books used to have a hard letter kind of page that you could tear it, fill in some information and mail it with free postage; You would get the free books as promised along with free gifts sometimes. Remember those card inserts? Well, I found them in this book. Why am I surprised because off-late such inserts are no longer seen. I remember seeing them in older books, more like pre-2005 era when internet, online shopping etc wasn’t that hep. But surprised to see it in a book published in 2011. Wonder if the author was trying to revive the good old paper-system of writing letters.
4) The plot shows a distinct chemistry between Cliff Boudreaux and Jenna Duffy. I hope there is a book in future featuring them both.
5) Author has recipes for Mint Julep and Crawfish Etouffee at the end of the book. I tried the Mint Julep as is mentioned in the recipe and it was a super hit with my friends. Being a vegetarian I didn’t try the Crawfish Etouffee though. :P
6) Grammatical / Historical / Location Errors:
a. On Pg. 173 7th para, author types a comment as being made by Ashley while there was no Ashley in the room but just Jackson, Jake and Angela. Infact, I was getting a bit confused between Ashley and Angela myself. Perhaps that’s what happened with the author too. And the editor might have missed the mistake too.
Tags: books, critique by amateur, krewe of hunters, reviews
Subscribe