Sinful In Satin is the third of the books in The Rarest Blooms series by Madeline Hunter published in September of 2010. This sinful plot is set between Celia Pennifold and Jonathan Albrighton who are forced by fate to stay together under a roof famed for the most scandalous profession. Like all of her novels, Madeline set this series also in the historic period when arguments were dealt with duels while passions with fire under the shade of skirts and breaches. 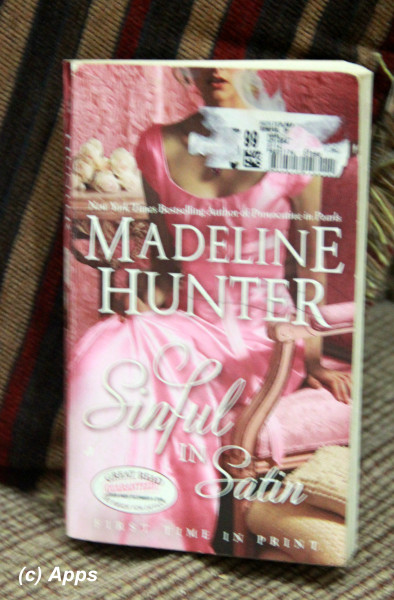 Celia Pennifold had been educated in worldly matters and also groomed in the art of pleasure by her mother, Alessandra Northrope - a famed London courtesan who had a successful brothel establishment as well. However, before even she was pulled into that world, five years ago she had run away and hid with her housemates at The Rarest Blooms. Now that her mother has passed away, she inherits all of Alessandra's properties - a small house in town, the brothel she ran and a lot of debt. And she inherits Jonathan Albrighton as well - who claims he had signed a lease with her mother for usage of the back room alone when he was in town. But there are debts to clear still. What else could she do but accept his tenancy rather than deplete her funds.  Reluctantly she permits him to stay as a tenant even though she suspects that there was no lease and that there are ulterior motives for Jonathan to be there in that house. Only she did not know what.

Jonathan had been hired by his Uncle Edward on another espionage activity that put him right in tracks of Celia - for the noble suspected that Alessandra had exchanged more than sex and pillow talk with the enemies during her rendezvous as a courtesan during the war. His goal is to find if Alessandra had kept any record of any of those conversations and names that would lead back to any nobles and  cause scandals unwanted. And if she kept he would need to swipe them from under the nose of Celia. Did Alessandra really have such kind of accounts stashed away somewhere? Did she really commit espionage with the enemies?

Her last weeks with her mother have been poignant, but no matter how much pressure Celia had put in, Alessandra had not revealed who Celia's father was. And Celia is now determined to find who her father was. Jonathan also has a personal quest that he has been trying to resolve - get a family acknowledgement so ambiguity about his life can be cleared once for all. And his Uncle Edward had been using that as a bait to get Jonathan to do all the espionage stuff for him. However this time he had fear that he would be crossing more than one line that he would either regret doing so or find redemption if possible. Another thing Jonathan had to settle was the attack on him that happened in Cornwall - which almost caused his life. Perhaps this investigation in Alessandra's stuff, albeit secretly, will give answers to him for more than one quest. How will both these quests land Jonathan and Celia in? Will the answers give them more questions or keys to unwanted doors that they could have kept locked? But someone else also was looking for the same thing that Jonathan and partly Celia was after. Who was that? Will that person cause any harm to Celia suspecting she might know the truth?

With all that was coming at them, Celia also had to face the scorn of many people in her neighborhood who knew her past and had shun many patrons who assumed that she now walked in her mother's footsteps. And also dragged the old flame Anthony Dargent back into her life who still expected to be the first patron of Celia when in fact Celia had loved him and thought he want to her to be his bride. Will she brave this weather and come out shiny?

In the sinful rendezvous between Celia and Jonathan, few parties aid and few strive to cause harm - Daphne and Katherine (Remaining residents of The Rarest Blooms), Lord Sebastian Summerhays and Lady Audrianna (we met them in the first book Ravishing In Red), Lord Grayson Hawkeswell and Lady Verity (we met them in the second book Provocative In Pearls), Mr. Mappleton (Alessandra's solicitor and executor), Tristan St. Ives Castleford (a one-time friend of Jonathan and part of the quartet of rakes and scoundrels), Marian (a one-time courtesan who worked for Alessandra and had aided Celia when she needed help, now she is housekeeper and cook for Celia) and Bella (a young girl who is lost and saved by Marian and now handmaid to Celia).

All of Madeline Hunter's plots are based on the same concept - some involve the hero and heroine getting married while some involve them in a relationship and end up in marriage at the end, some involve murder and scandal tying to the hero or heroine or both, more than often the hero is a Lord or a Marquess or a Bastard Son of a Lord or Marquess while the heroine is tied with the scandal to begin with involving herself or her father, and above all almost all the plots are set in historic period in England, Ireland or Scotland regions. Yet the characters are so very unique and so very complex.

This time around she had both of the hero and heroine to have scandalous backgrounds - one a bastard son of an earl and one a courtesan's daughter. How well they matched in every way - secrecy, worldly matters and even in sexuality. It was a pleasure to watch these tiptoe around until they fall-over each other. I also loved the easy camaraderie that the author shows the quartet of rakes share - Summerhays, Hawkeswell, Albrighton and Castleford. Initially when Castleford was introduced in the first book, I had an irritated feeling towards him. But as the series progressed, his character is evolving into something different, almost likeable if I may say. So once again we have a marvelous tale between one of her rake and scoundrel of a hero paired with a scandal-filled heroine who wade through the sea of conspiracies and murder / mystery and eventually find love and honor. And like always comes with surprising twists and turns that don’t make the reader bored of this plot.

1) The plot of this book reminds me another of Madeline Hunter's book that released years after this book was published. The second book in The Wicked Trilogy published in October of 2015 - Tall, Dark and Wicked - has a similar plot where the heroine Padua Belvoir inherits a brothel that her father had a partnership in. My review of this book can be found here. I wonder why the author repeated a similar plot.
2) Now that three pairs have been completed - one woman each coming from The Rarest Blooms housemates, that last book would most definitely be about Daphne. And I wonder if it would be with Castleford since he is the remaining rake of the quartet of rakes - Summerhays, Hawkeswell, Albrighton being the remaining three.
3) I am still curious to see if the final book will have a sub-plot atleast involving Morgan Summerhays - older brother to Lord Sebastian Summerhays and the Third Marquess of Wittonbury. We met him in the first book Ravishing In Red and he had been away in foreign lands hoping to heal his injured legs after being pulled into a scandal.
4) Jonathan Albrighton is introduced in this plot and Celia seems a bit surprised and thoughtful when his name is seen in one of the newspaper articles that Verity collects. Also Jonathan is considered as one of the four in the group that consisted of the most handsome rakes and scoundrels on that time - Summerhays, Hawkeswell and Castleford being the other three. I am inclined to believe there will be a plot between Jonathan Albrighton and one the two remaining women from The Rarest Blooms - either Celia or Daphen.
5) Katherine Johnson joins The Rarest Blooms - being rescued and helped by Verity. Will there be a plot for Katherine as well? I wonder.
6) This entire series though historical, reminds of The Garden Trilogy by Nora Roberts. Although her books had more detailed description of gardening, grafting, green houses, conservatory, etc and dealt with ghosts and legends from past.  Check my reviews of this trilogy here
7) Audrianna is pregnant in this plot and as it ends it is shown that so does Celia.
8) Grammatical / Geographical / Editing Errors:
a. On Pg 65, Albrighton gets a note from Castleford to be at his home on Tuesday at 8pm. However on Pg. 84 the author shows that Albrighton had arrived at quarter past nine, only 15 minutes late. That should be full hour and fifteen minutes late. Perhaps the author forgot the original time while the plot proceeded.
Tags: books, critique by amateur, rarest blooms, reviews
Subscribe