Ravishing In Red is the first of the books in The Rarest Blooms series by Madeline Hunter published in January of 2010. The feisty plot set between Audrianna Kelmsleigh and Lord Sebastian Summerhays who are forced to join in a marriage of necessity to avoid a scandal. Like all of her novels, Madeline set this series also in the historic period when arguments were dealt with duels while passions with fire under the shade of skirts and breaches. 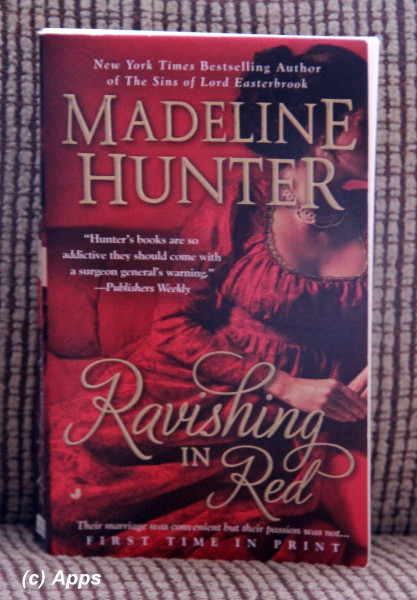 Audrianna Kelmsleigh comes to the Two Swords coaching inn responding to an advertisement in the paper - a person named Domino was seeking to meet her dead father to discuss a matter of mutual benefit. Hoping that this Domino would have information that would clear her father's name - who was accused of approving bad gun powder resulting in a loss of several soldiers in the war, she takes up a chamber in the inn. Instead in walks Lord Sebastian Summerhays who had come to gather the information Domino was selling. The very same Lord Sebastian who was relentless and uncompromising while investigating her father. But unfortunate turn of events happen while at the inn - accidentally Audrianna's pistol goes off at the hands of Sebastian as he was tussling with an unwanted intruder. Was that intruder the Domino? Does he carry secrets that would clear her father's name? But more than that Audrianna now faced a potential scandal that anyway it took would not benefit her at all given the history they carried. And perhaps a scandal for him as well because of his position and the investigation he had lead. To avoid scandals on both ends they get married. But will this marriage of convenience turn into an abode of love? Will Sebastian be able to uncover the truth and free Audrianna's father of the scandal? Who was behind the malfunctioning gunpowder production? Was Audrianna's father a scapegoat? What if Audrianna's father was really involved, will Sebastain still honor Audrianna as his wife?

In a parallel plot explores Grayson and his loss of his riches when he had become Earl and his bride on the day after marriage - a hope that her money would help him squashed permanently. Or did it? What happened to that bride? Did she really runway? How is this connected to the gunpowder malpractice? Another parallel plot about Morgan Summerhays follows along in the book. Morgan had been injured two years ago in the war where he lost mobility in his legs. He has been an invalid marquess and thus Sebastian had been representing him everywhere in politics. But will Morgan's legs gain movement back again? Will the gunpowder scandal have any relation to his accident? Is Sebastian driven to find a closure on the case for the sake of Morgan as well? Or just for Audrianna?

Several allies and enemies surround Audrianna and Sebastian while they try to unravel the mystery behind her father's scandal - Grayson (Earl of Hawkeswell), Daphne Joyes (Ausdrianna's cousin and at whose home she stayed shared with other guests), Dr. Fenwood (Sebastian and Morgan's butler), Morgan Summerhays (third Marquess of Wittonbury, Sebastian's brother and confined to wheelchair due to a war injury), Celia (one of the guests in Mrs. Joyes's house), Tristan St. Ives Castleford (Duke of Castleford, a one-time friend of Sebastian, but now on opposing sides of politics and everything), Lizzie (One of the guests in Mrs. Joyes's house), Esther (Marchioness of Wittonbury and mother of Sebastian and Morgan), Sarah (Audrainna's sister), Meg (Audrianna's mother), Percival Kennington (Friend of Morgan) and Bernard Symes-Wilvert (Friend of Morgan).

All of Madeline Hunter's plots are based on the same concept - some involve the hero and heroine getting married while some involve them in a relationship and end up in marriage at the end, some involve murder and scandal tying to the hero or heroine or both, more than often the hero is a Lord or a Marquess or a Bastard Son of a Lord or Marquess while the heroine is tied with the scandal to begin with involving herself or her father, and above all almost all the plots are set in historic period in England, Ireland or Scotland regions. Yet the characters are so very unique and so very complex. Similarly here also she has again a rake and scoundrel of a hero paired with a scandal-filled heroine who wade through the sea of conspiracies and murder / mystery and eventually find love and honor.  And like always comes with surprising twists and turns that don’t make the reader bored of the plot.

Spoiler Alerts:
1) Daphne has a conservatory in her home where she grows flowers and sells. She calls her business The Rarest Blooms.
2) I am guessing the remaining books in the series most definitely will cover one or more of the characters that we met in this book. However, I am curious to see if any of the plots will involve Morgan Summerhays, the Third Marquess of Wittonbury.
3) Audrianna doesn’t come with just looks and a scandal behind her. She also comes with a flair to write songs. One of her song "My Inconstant Love" becomes a huge hit and also was victim of scandal when Mr. Trotter - the businessman who had sold her songs - used the scandal to make more money on the song. Another one of her song "My Heart and My Soul" she writes but she never publishes or sell it. I would have loved to seen some of her career take up as a song -writer in the plot too.
4) This entire series though historical, reminds of The Garden Trilogy by Nora Roberts. Although her books had more detailed description of gardening, grafting, green houses, conservatory, etc and dealt with ghosts and legends from past.  Check my reviews of this trilogy here.
Tags: books, critique by amateur, rarest blooms, reviews
Subscribe