Stars:  5 / 5
Recommendation: Superbly depicted the simple lives of a community and how they fare the changes and hardships that befall them.

In my post on the 1971 American musical film Willy Wonka & The Chocolate Factory I had mentioned that this film lost both of its nominations to Fiddler on the Roof movie that was released the same year. Havent watched the latter I wondered what so special about it that it lost to such a magical movie. I was checking online to see if this movie was available on Netflix when one day it started playing on TV. Bingo! I did not lose the opportunity to watch it and then write my review on it. So here it goes. :)

Fiddler on the Roof is a 1971 American musical comedy drama which was an adaptation of the 1964 Broadway musical of the same name. Music for the film is composed by Jerry Bock, lyrics by Sheldon Harnick, and screenplay by Joseph Stein. It starred Topol, Norma Crane, Leonard Frey, Molly Picon, and Paul Mann - unfortunately none of whom I recognize. :( As mentioned earlier this movie won three Academy Awards for Best Music, Scoring Adaptation and Original Song Score (John Williams), Best Cinematography (Oswald Morris) and Best Sound (Gordon K. McCallum, David Hildyard) that year. Although it received several other nominations too. The plot revolves around Tevye - father of five daughters - whom he attempts to teach them the Jewish religious and cultural traditions as the external influences are getting closer and survive the changes in political situation and constant harassment from non-jewish people. In the entire movie Tevye talks to the audience or God as appropriate making it a dialogue with the viewer than a movie. The movie is also set in two Acts just like the original Musical.

Act 1 opens with Tevye (portrayed by Topol) addressing the audience. Tevye is a poor Jewish milkman living in the Ukrainian village of Anatevka in 1905. He starts speaking about why a fiddler sits on the roof and fiddles and compares that to the lives of Jewish in the village of Anatevka. His simple statement "to scratch out a simple, pleasant tune without breaking his own neck" speaks volumes on what we are going to see in the movie ahead. 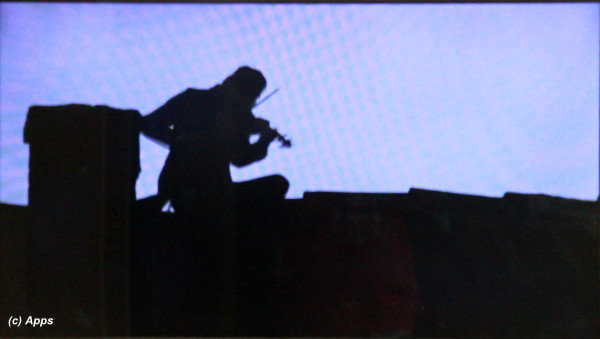 Interesting characters are introduced during this dialogue of Tevy - Yente, the Matchmaker; Nachum, the beggar; and the Rabbi. Topol and his wife Godie (portrayed by Norma Crane) try to work with Yente to get their three older daughters married appropriately. But Tzeitel - his oldest daughter - is in love with Motel Kamzoil, the tailor; Hode - his second daughter - is in love with Perchick, a radical Marxist and Chava - his third daughter - shows interest in Fyedka, a Russian Orthodox Christian. How they both understand this love, perceive it, agree for it and eventually get the community to see the right in their decisions thus by changing the Traditions consists of the rest of the act. As the curtain falls on Act 1, Tevye questions God as to why the military has to come and along with Constable destroying property to create a riot per orders at Tzeitel and Motel's wedding ceremony while Tevye and his family end up straightening it afterwards.

Act 2 begins a few months after Motel and Tzeitel's marriage. This shows us how the newlyweds are settling, how Tevye survives his hardships, accepting the love of Perchik and Hodel and consenting for their wedding, problems that Perchik faces and how he fares with help of Hodel, Chava's elopement wedding with Fyedka, Tevye's unacceptance of it an finally the forced evacuation of all the Jews from Anatevka. Despite the hardships he faces, Tevye accepts the changes that come along in the way in his simple life. Yet in the end he still takes the Fiddler along with him during the evacuation letting the viewers know that he may accept changes but he will not leave his traditions behind.

Tevye enjoys and cherishes his simple life and traditions that Topol so well portrayed and makes the viewer feel the same happiness in that simple life. The opening credits to the movie don’t appear until after 12 mins of the movie is over. Loved the harmony that they show between the Jews and non-Jews at a bar dancing to music and singing to Life.

In the theater when this movie was playing, during the intermission they play the Entr'acte music.

A superbly made movie that shows the simple lives of one community with the subtle note of atrocities that would befall on them soon. The staging, the characterization, music, emotions, dialogues, dances, choreography - everything shown in so simplicity yet leaves a profound impact on the viewer. Deplorable activities done to humans by humans shown as a backdrop to this simple milkman's life definitely is something to ponder over by each one and all.

Spoiler Alerts:
1) I haven'-t seen the Broadway musical. However when it happens to come by next time, I am sure going to watch it. As of Nov 2018, I watched the broadway musical when it came to one of the local theaters here. I totally loved the tehater version too.
2) Some of the cast members had earlier worked in the stage productions of the musical:
a. Topol who portrays as Tevye and Leonard Frey as Motel Kamzoil, the tailor worked in the same roles in the stage productions.
3) Opening Song Tradition and the Prologue comes intermittently through the film. It is a powerful song showing concisely the lives of Jews and their traditions. Some of the Lyrics for this song can be found here.
Tags: critique by amateur, movies, reviews
Subscribe