Stars:  3 / 5
Recommendation: Like any Sparks book, this movie leaves you with tears - some happy some sad.

Dear John is a 2010 American romantic drama-war film starring Channing Tatum and Amanda Seyfried. The film is an adaptation of Nicholas Sparks' 2006 novel of the same name.  The plot basically follows the life of a soldier who falls in love with a young woman but is stationed in Afghanistan, so they communicate through letters. 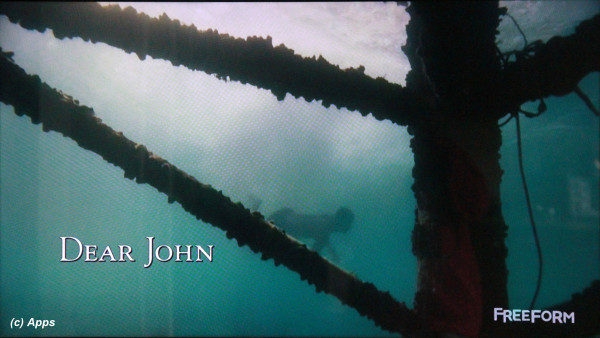 The movie opens with  United States Army Special Forces, Staff Sergeant John Tyree (portrayed by Channing Tatum), is lying on the ground in Afghanistan being shot multiple times. In that somewhere in-between state he recalls his childhood and then narrates it to someone else who was the last thing he thought about before blacking out. The plot then flashbacks to two years ago in 2001 when John first meets Savannah Curtis (portrayed by Amanda Seyfried) while on leave from Army in Charleston, South Carolina. In the two weeks he is there he meets with her neighbor Tim Wheddon (portrayed by Henry Thomas) and his son, Alan; his past about his violent natures comes out in bits and pieces; learns that his father, Mr. Tyree (portrayed by Richard Thomas), may have high-functioning Autism; and finally fall in love with each other.

They make plans on how they want to set their future - that he would go back to army and finish up his one year of commitment while she will finish her school and they will meet again to set their plans in motion. They continue their relationship through letters. However 12 months is a long time to have many changes in anyone's lives. And so does too for John and Savannah. What happens after 12 months? Will they meet? Continue on their plans? How will they cope with these changes? So which is the Dear John Letter? That is what we see in the rest of the story.

Just with any Nicholas Sparks movie this is also set in South Carolina - he usually sets his plots in either South or North Carolina. And like always has one key character dying in the end - sometimes that person may be good or sometimes that person may be bad. His plots always wrench your heart and make you more human. That’s what I like about his books. However, as always I would like to read a very dangerous adventure book or a very funny movie.

Having not read the book yet, I would say another beautiful plot and a well-made movie.

1) I have the book this film is based on but havent read it yet.
Tags: critique by amateur, movies, reviews
Subscribe