Stars:  4 / 5
Recommendation: Music, Murder, Humor, Mystery, Romance - all elements culminating into one movie that will grip you hard.

Post Box 999 is a 1958 Hindi crime-thriller starring Sunil Dutt, Shakila and Lila Chitnis in the lead roles. The movie was produced and directed by Ravindra Dave.

On the way to work one day the song "Neend Na Mujhko Aaye", a remix version, which I really didn’t like, but was curious on the lyrics and where the original song came from. That's when I came across this movie and promptly added to my list to review and watch. So, here's the review. But first the remix version is from the 2015 Hindi romantic-comedy movie Shandaar ( = Magnificent) Sung by Siddharth Basrur, Saba Azad and Music composed by Amit Trivedi. They have used the same lyrics that were originally penned by P. L. Santoshi. (A little bit of the clip of the song from the movie)

Well now back to the movie in question. The movie opens with a song at Mogul Sarai Junction - contrary to many movies - that also introduces all the key characters that weave into the web of this mystery: Vikas (portrayed by Sunil Dutt), Nilima (portrayed by Shakila) and Mrs. Ganga Deevi (portrayed by Lila Chitnis). Mrs. Ganga Devi arrives at the station to meet her son Mohan (portrayed by Kundan) who has been sentenced to be hanged 10 years ago for killing his girlfriend Shyama (portrayed by Sadhna) although he has proclaimed that he is innocent. He was being transferred from Lucknow Jail to Mirzapur Jail and this station was a transition point. She ends up rooming with Nilima when she loses her job as a housekeeper. Vikas, an investigative reporter, responds to the ad that Mrs. Ganga Devi puts in the newspaper offering a reward to prove his innocence. He reaches Nilima's home in search of Mrs. Ganga Devi. Upon hearing her story he takes up the case to investigate. In the process, although reluctantly in the beginning, Nilima also helps. Who has killed Shyama? Why was she killed? Is Madhav really innocent? Will Nilima respond to Vikas's advances? How are Banarsilal and Chiranjilal tied up in this matter? Was Bindiya telling the truth when she said that Mohan had fired the revolver?

Music for this film was composed by Kalyanji Virji. Lyrics were penned by P. L. Santoshi. Singers included the then and now well-known singers Asha Bhosle, Lata Mangeshkar, Mohd. Rafi, Manna Dey, Suman Kalyanpur and Hemant Kumar. Here are all the six songs from the film.

And the one that made me write this post, a very romantic melody Sung by Lata Mangeshkar and Hemant Kumar; that has been revived thanks to its remixed version. (Cause it was missed in the above list)

The plot is filled with romance, humor as well as the solving of a murder. Humor element is not only provided by Sunil Dutt and Shakila but also by the side-artists - Manorama (portraying as Laxmi Chiranjilal - who had lost a dog named Mohan) and Kirshnakant (portraying as Karamveerji - the editor of Prakash Paper). I remember seeing Manorama only in villainous or vamp roles. So it was refreshing to see her as a comedian. With melodious music in the mix, the plot certainly keeps you glued to it, wondering what the next reel would show.

As the saying goes "old is gold" this is certainly one of those gems that can be watched time and again and thoroughly enjoyed.

Spoiler Alerts:
1) There is an assistant named Laxmikant listed under Music in the opening credits. I wonder if he is the same one from the famous duo Laxmikant - Pyarelal. However nowhere in his bio or on internet this movie is mentioned under Laxmikant's list. However since the music to this film was composed by Kalyanji Virji and it is well-known that Laxmikant also worked under Kalyanji as an assistant, it is safe to assume that this is the same Laxmikant. Also notice that his name is spelled as "Laxmi Kant", two separate words rather than the later version where he combines it into one. And if you notice in the credits Anandji Virji is also listed under assistant. This was before Kalyanji - Anandji became the famous music composing duo. 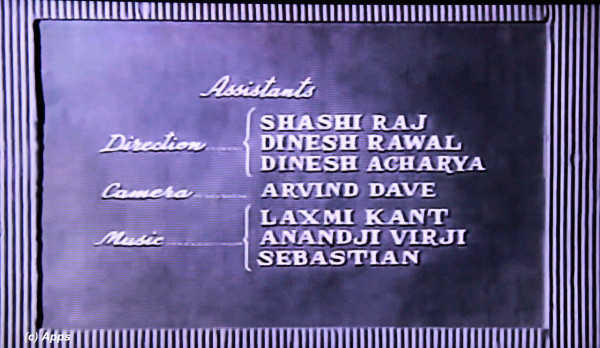