September 29th is celebrated as National Coffee Day here in United States. To honor that day I am posting a review on this 2011 Telugu (Indian) romantic drama film Kudirithe Kappu Coffee ( = One Coffee, If Possible!) starring Varun Sandesh and Suma Bhattacharya in the lead roles. This movie has become the launchpad for several film professionals - Yogeshwara Sharma - son of famed lyricist Sirivennala Seetha Rama Sastry - debuts as a music composer, Cinematographer Ramana Salva debuts as the director of the film and Suma Bhattacharya made her debut into Telugu film world with this movie. 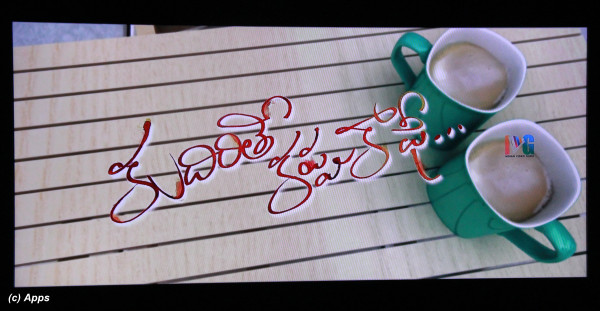 The year before when I was doing my Magic In Tunes series, I had posted this Coffee Song from the 2014 Telugu comedy horror film Geethanjali. However I was not in a mood to watch a horror movie, albeit a comedy one, all by myself. So I ended up picking this romantic drama instead.

The plot begins with Venu's (portrayed by Varun Sandesh) friend committing suicide because of a failed love affair. He decided that he will not love anyone that will make him take his life and literally hates love. In a parallel line Lasya (portrayed by Suma Bhattacharya) is a student of hotel management and wants to make her granny's - Malathi (portrayed by Sukumari) - coffee shop a famous one. Malathi's coffee shop is at Dakshinagiri Hill Station in Andhra Pradesh. Incidentally the coffee shop is owned by Venu's father Giridhar (portrayed by Bhimaneni Srinivasa Rao). Knowing that it was not her son's but Giridhar's Malathi wants to return the ownership back to him. But she has a loan to pay to Mohan (portrayed by Tanikella Bharani) who also operates Decent Lodge in Dakshinagiri. In the midst of this Giridhar sends Venu to Dakshinagiri to take care of Malathi and the Coffee Shop, but not reveal his true identity. This begins the journey of Coffee between Lasya, Venu, Giridhar and Malathi through this Coffee Shop. Where will it lead them? How does it end? Will they love the Coffee they taste? Will they throw away the Coffee they get? Will Mohan finally take over the Coffee House? Who will end up owning the Coffee House in the end? Will Venu and Lasya fall in love eventually? Well, watch till the end to know it.

Varun Sandesh still looks like Chandu from his first film Happy Days that was released in 2007. His co-star Tamannaah who also had debuted in that film has gone places in the film world, while Varun Sandesh stayed behind. Perhaps his look need to be changed or he need to be more versatile or he may have to stop acting as a college goer anymore. Alas he seems to be stereo-typed into such roles. A budding talent remaining budding forever. Suma Bhattacharya is beautiful and pleasant to look at as long as she starts talking. Most of the times she comes off too loud. Her nature is also shown as very stubborn and childish - not a crowd pleaser nor appealing to watch for two hours on a big screen.

Although the movie starts as a normal family drama it takes on the theme of wedding / event planners, particularly the 2010 hit Hindi romantic comedy movie Band Baaja Baaraat ( = Band Music and Revelry)  that was based on wedding planners and their trials and tribulations - starring Anushka Sharma and Ranveer Singh. (More about that movie here)

The movie has caricatures of the characters with animation within the movie that reminded me of the 2004 hit Hindi romantic drama Hum Tum ( = Me and You) that had the similar presentation - comic characters Hum and Tum having their own animated sequences representing the relationship of the lead characters Karan and Rhea and their lives move. (More about that movie here) In this case however, the caricatures are shown depicting the dreams or thoughts of the characters.

Music is moderate but pleasant. For a beginner Yogeshwara Sharma has given decent music. The opening credits has a pleasant background score. Lyrics are penned by Sirivennala Seetha Rama Sastry and have been Sung by a myriad of singers - S. P. Balasubrahmanyam, Nihal, Ranjith, Balaji, Hamsika Iyer, M. M. Keeravani and Chitra. Among the songs the ones that I liked are - Srikaram (Sung by S. P. Balasubrahmanyam and Nihal) for the way the song was taken; excellent cinematography.

The title took a long while for me to figure out how it is related to with the plot. However there is a scene where the heroine explains how to enjoy coffee. It was created well enough that even a person like me who doesn’t drink coffee would like to pick up a cup at least once.

Simple plot, decent acting by the star cast. Comedy and Romance are melded well and balanced but lacks the impact of Drama. Locations are simply breathtaking. However with so many films plots mixed in the movie became routine and predictable. And the ending seemed a bit rushed up. A one-time watch movie for those boring days as there is nothing special to grip you to it and make it memorable.

1) Whatever the reason I picked this movie, whenever the word coffee I hear, and relate it to films, the following two always come to my mind. Why do I get them? Well, I have no clue. Perhaps they left a mark somewhere in my brain. :P
a. Anand, a 2004 Telugu drama film. The story is really sweet and so is the music. Just like the tag line says Manchi coffee lanti cinema meaning a movie as good as a cup of coffee. More on the film here
b. And this song Tere Sang Ek Simple Si Coffee from the 2003 Hindi action thriller film Zameen ( = Land). Sung by Hema Sardesi and K.K. the song was picturized on Abishek Bachchan and Bipasha Basu. Lyrics penned by Sameer and Music composed by Himesh Reshammiya. Like I say so many times, as long as Himesh doesn’t act or sing, his songs and movies are superb, over the top. :)