Stars: 3.5 / 5
Recommendation: Litigation and Corporate Espionage - a law that is broken so easily disrupting so many innocent lives that Grisham brings to page excellently.

The Associate is the 21st legal thriller by famed author John Grisham. It was published in January 2009. The plot revolves around a supposed rape and a firm that hires a lawyer to work against them. Sounds like a confusing plot or a familiar one? Well, read through the review to know more. 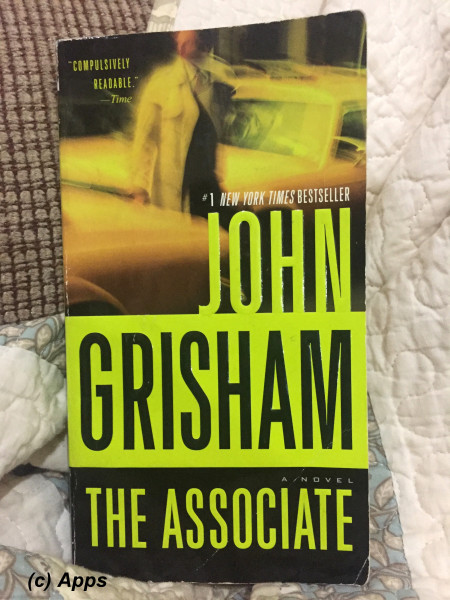 Five years after an alleged rape that was proved didn’t happen, Kyle L. McAvoy, is approached by four FB agents, two from Hartford, CT - Bob Plant and Nelson Edward Ginyard - and two others from Pittsburgh, PA and urge him to meet with Bennie Wright - the chief investigator of sex crimes from Pittsburgh, PA.  Upon meeting Bennie, Kyle is presented with a video taken on the day of the alleged rape that show three of his friends - Baxter F. Tate, Joseph N. Bernardo and Alan B. Strock - having sex with a very unconscious and sleepy Elaine Keenan. Although Kyle was not part of the act, he was sitting a few feet from the event supposedly passed out. Five years ago the case didn’t stick cause polices could not prove the rape - Elaine was supposed to have slept with every one of the Beta brothers; she filed the complaint five days after the incident; no rape-kit and above all no video that proved the rape. Now Wright and the FBI had the video. However, Kyle surmises that this is a shakedown because of Baxter Tate who being from a very rich family, and now Elaine has come up with a plan to shakedown and get profited.

After a gruesome interview with Wright, he reveals that Wright and the four people work for a firm who hire lawyers for their firm but vet out their past thoroughly and go to the extent of blackmail to hire the lawyers. Wright wants Kyle to take up the position at Scully & Pershing in the litigation department and bring him the documents of a certain case that is being fought between two major companies - Plaintiff being Tryon Aeronautics and Defendant being Bartin Dynamics. Despite his best interests, he takes the job to avoid the video to be released to public. Kyle has been working with kids with no dads or from bad homes from past two years as a coach to the Red Knights team, in the 12 and Under division of the winter league of New Haven Youth League. So, his friends, girlfriend Olivia and father John McAvoy are surprised and disappointed that he was not taking up the pro bono offer and turned coat for a bigger firm. This change certainly disrupts his life; alienates himself from his family and friends; under constant surveillance no matter how much he tried to avoid; under immense fear that he would be caught and above all the dread that the video might be leaked.

For Kyle irrespective of what Wright wants him to do, his biggest question was how did they get hold of the video? And who had taped? Was there anything else in it that Wright might have erased? Will any of his friends who were actually seen on the video help him? Or shun him and leave him to the vultures? With so much technology at hands of Wright, how will Kyle out-smart him? A parallel plot involving lives of Joey, Baxter and Elaine follows along. How does this end for Kyle and the others?

The setting is in Connecticut, especially near to the place I live, so the book added an additional charm for me to hold on to. :) The tale grips you till the end only to pale in the last few chapters. I would have loved to see a much more fitting ending for Kyle and some justice for all that he and his friends had to go through. However, this is exactly what might happen in real life compared to reel life. So, it may be indeed a fitting ending.

A fast-paced good read from John Grisham always, giving us insight into a different kind of law - Litigation and Corporate Espionage. Worth reading once or twice if you want.

Spoiler Alerts:
1) While writing about this review, when I googled for the novel, I came across a 1996 American comedy film of the same name (Link to the movie here). It starred Whoopie Goldberg, Dianne West, Eli Wallach and others.
a. Incidentally this 1996 film was a remake of the 1979 French film of the same name.
b. And the French film was based on Jenaro Prieto's 1928 novel The Partner.
c. I hadnt seen neither of the movies nor read the novel. But this is on my list now to read, watch and post review later.

2) Per wiki, John Grisham's novel is based in part on the case of a Las Vegas, Nevada man who as part of his Alcoholics Anonymous program, wrote a letter of apology to the girl whom he had raped at a fraternity party in University of Virginia in 1984. The man was charged for rape and had served six months jail time after the letter was received. Some justice perhaps to the girl even if it came nineteen years later and even if no one had believed her in the first place.
Tags: books, critique by amateur, reviews
Subscribe