Stars: 4 / 5
Recommendation: Want to know how a heist is done and almost get away with it, here is a story from history that will turn your heads in million directions. Go for it.

The Great Train Robbery is a 1975 historical novel written by Michael Crichton. It is a fictionalized version of the Great Gold Robbery of 1855 - a massive gold heist that took place on a train during the Victorian-era England on May 22 1855. 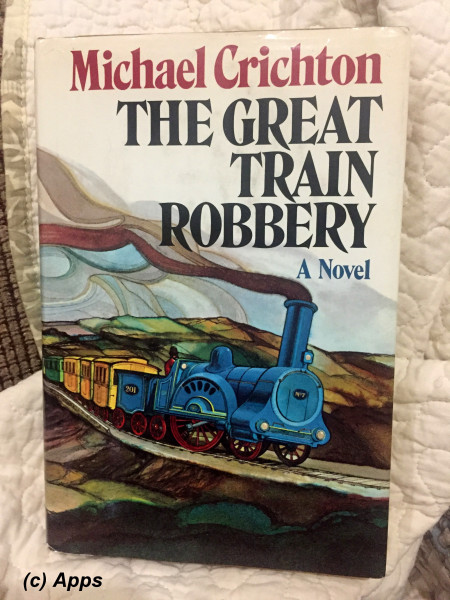 The book doesn’t start with the robbery details alone but with an elaborate introduction on why this particular robbery was called "The Great Train Robbery" when the gold stolen was considerably small amount and also other robberies were much efficiently done around the same. A very interesting read it was. The book is split into five parts.

The First Part "Preparation" introduces us to Edward Pierce and his shady past, his reputation as a master cracksman, still posing as a gentleman in his upper-class acquaintances, but clearly showing us that he was well into an elaborate plan to pull off the greatest theft. With his partners in crime - Robert Agar aka The Screwsman (a specialist in keys and safe-breaking), Clean Willy aka The Snakesman (one who is adept at wriggling through small spaces) and Barlow (a thug with a scar across his forehead and serves as Pierce's cabby). Ironically Clean Willy infact dealt with always shady activities and the mysterious Miss Williams - together prep to the finest detail with regards to where the keys are that will help them unlock the safes where the gold bullions are being kept and transported. Mr. Henry Fowler - the general manager of the prosperous banking firm Huddleston & Bradford - becomes an unwitting accomplice in Pierce's plan, without his knowledge.

The Second Part "Keys" deals with Edward Pierce acquiring all the four keys he need to unlock the safes. In this process he courts the daughter of Mr. Edgar Trent - Miss Elizabeth Trent - the president of the bank; provides "fresh" meat to Mr. Henry Fowler; goes to the extent of hiring a skipper; staging a Carriage Fakement; snaffle a leopard; performs a Jolly Gaff and even acts like a drunken sod.

The Third Part "Delays and Difficulties" highlights the hurdles Mr. Pierce faces in executing his plan to steal the gold in the strongboxes - escaping clutches of Miss Elizabeth Trent; figuring our why the strongboxes were removed; avoiding the miltonians that were setup on him because of loud mouth Clean Willy; Give the Scotland Yard a different path to look at; minor hurdles that he resolves with a corpse - albeit undead still.

The Fourth Part "The Great Train Robbery" that takes place on May 1855 covers how Pierce and his associates orchestrate the robbery that they have been planning for a year now. Although the heist was a success, it wasn’t east for Pierce for he ended up looking like a dead-man covered in soot by the time the act was done.

The Fifth Part "Arrest and Trial" gives a finale to the heist with the arrest and trail. One would think that such a well-orchestrated heist would not be caught. Apparently one is wrong to think so. Almost a year and a half after the heist, the robbers get caught and put to trial.

Very interesting to learn so much about the Victorian-era England - the fashion of growing whiskers coming back; introduction of cigarettes; how the Victorian decoration of homes is filled with frills and tassels; traveling using dogcarts, tandems, broughams .and omnibuses; the sporting of dog fights and dog ratting; the beginnings of women not getting marries until very late and being well-educated; high-end prostitution that takes place in open air, formation of the Scotland Yard and its progression; the recognition of "white-collar crimes" although to a lesser extent. In contrast we get the glimpse of the beginnings of the slums in modern London that kept growing and growing.

The author through the narration gives a lot of history beyond every incident happens during the time that leads to the heist or every step that Edward Pierce takes in this elaborate robbery. That filled a lot of gaps and kept one glued to the plot. Amazing to see how Edward Pierce looks for every single detail and step to carry on this heist yet at times he becomes a little lax or neglect that perhaps causes his downfall in the end. Or perhaps from a very low-key link that he ignored against his gut feeling that brought him to trial.

Certainly a very interesting read of a great robbery that would form basis for many fictional stories and movies for years to come.
Spoiler Alerts:
1) The book was made into a film titled The First Great Train Robbery in 1979 that was also directed by Michael Crichton. The movie starred Sean Connery, Donald Sutherland and Lesley-Anne Down. Another film on my list to watch. :)
2) Author uses the phrase "A place for everything, and everything in its place" in the book. The first time I heard this phrase was in one of the Law and Order: Criminal Intent episode "Undaunted Mettle".
3) Interesting usage of words and phrases all through the book reflecting to the Victorian-era English along with the conman language: (and much more than what I have listed below)
a. risible - meaning to provoke laughter.
b. navvies - a laborer employed in the excavation and construction of a road, railroad, or canal
c. cracksman - the author uses this gentle term instead of a burglar or robber or a safecracker.
d. appurtenances - accessories or items associated with a particular style of living.
e. pogue -military slang for non-combat staff
f. nethersken - lodging house in a slum
g. skipper - a person who spends the night at any and every odd cracks in the walls, streets, etc.
h. snaffle  - take for oneself without permission
i. Phrases - Breaking the drum; putter-up; The Praid Prig

4) There is mention of the hanging of Emma Barnes in the book which I originally thought fictional. But indeed it was fictional. There was never a person named Emma Barnes hanged in Newgate Prison, England.
5) The author mentions about a Lord Cardigan, on whose name a sweater was created that was worn by soldiers in the Crimea that he had led and he himself had worn. The story is true however the character was James Brudenell, 7th Earl of Cardigan, for real. More about this birth of Cardigan here
6) There is mention of A. E. Coolidge - pioneer in mountaineering - and also the sport in itself on how it began. :)
7) It is so appalling to see a bell tugged to the top of a coffin, but if you see what the Victorian Era folks went through this was not so surprising, lest one would bury a live person. Bateson's Belfry had become pretty famous and made him a rich man overnight.  But is this fact or fiction seems to be debatable. :)
8) The entire plot reminded me of the 2003 American heist movie The Italian Job (I posted a review of this a long time ago here). Also reminds me of the 2008 British heist-thriller The Bank Job (More about the movie here) and the 2006 American film The Inside Man (Posted the review of that movie here).
9) Glimpses of British losing their power in India are shown for the first war of Independence took place in India the same year that Edward Pierce went to trial - 1857
Tags: books, critique by amateur, reviews
Subscribe