Daddy's Gone A Hunting as a Mary Higgins Clark mystery-thriller published on March 20, 2013. The plot revolves around a fire at one of the antique reproduction store in New York, a disappearance / kidnap that was more than 20 years old and how these two tie in together changing a few lives forever. 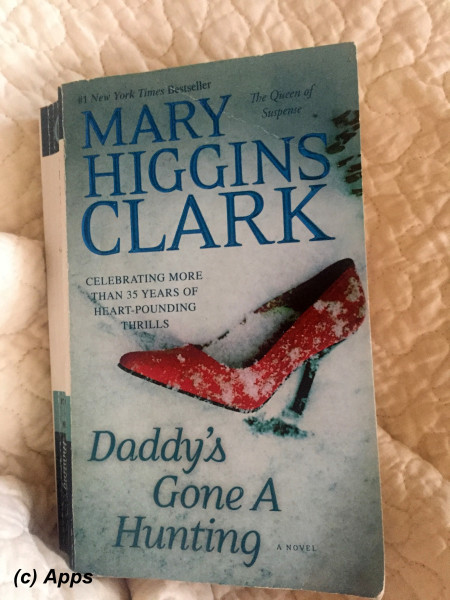 One early morning before even sun was up, Kate Connelly - the oldest daughter of Douglas "Doug" Connelly and a glamorous CPA - and Gus Schmidt - the last of the artisans who had been forced to retire from the Connelly Fine Antique Reproductions - meet at the plant. Kate wanted to show something to Gus and confirm her suspicions. However as they climb the stairs the entire plant that consisted of the factory, a showroom and a private museum explodes. Although Kate tries to grab Gus along with her and reaches just outside the backdoor, Gus dies in the explosion while Kate goes into a coma. Hannah Connelly - the youngest daughter of Doug Connelly - was in the process of getting her own designer label when the incident at the plant occurs.

The incident and the investigation brings light into the long ago boating accident in which they lost Doug's wife, his brother Connor and four close friends. Kate was 3 years old and Hannah was just 8 months when this had happened. The plant had been going down in the finances and profits for a while and Kate had been trying to get her father to sell it. However Doug was against it as he felt the land value will increase ten-fold and didn’t want to sell short. Had Kate found a helpful aid in Gus and together they had formulated a plan to blow the plant but were unsuccessful?

The only one who believes in the innocence of the Connelly Sisters was Hannah's best friend Jessica "Jessie" Carlson - a successful defense attorney - and is representing the sisters in case the Fire Marshalls and the Detectives build a case against Kate Connelly for arson and murder. Everyone had something to hide, and many had reasons to blow up the plant. But who did the honors? What was it that Kate had spoken to Doug in her unconscious situation that put a fear in Doug's mind?

In a parallel plot Mark Sloan - a young corporate real estate attorney - moves from Chicago to New York City not only to expand his horizon and try a new place new job, but also to see if the disappearance of his twenty-eight year old sister Tracey Sloan could be re-opened, even it has been twenty-eight years old cold case, and find a closure perhaps. For it was not just his mother - Martha Sloane - who was waiting for the closure, he had been too since he was eight years old. Incidentally he rents an apartment right above where Hannah Connelly lived. How is the fire at the Connelly Plant related to Tracey's disappearance that happened 20 years ago? What will Mark find out about his sister? What will the Detective Nick Greco - the one who was originally assigned to the case unearth now, although he is a retired detective now?

A third parallel story of the murder of Jamie Gordon - a college coed - that was never solved. She was murdered one night while she was working on her paper on street people. However, three weeks after she started the paper she disappeared only to be found a month later dead in East River. She had been strangled. Her father Lawrence Gordon had been keeping in touch with John Cruse - the assigned detective on the case - but it had been two years and the case had slowly gone cold. But was it? How is this murder related to the disappearance that occurred 20 years ago and the recent fire?

The Fire Marshals Frank Ramsey and Nathan Klein were assigned the case to investigate the fire. In the process they don’t hesitate to turn any stone or rattle any person. Some of the characters that the Fire Marshalls as well as retired Detective investigate as the plot proceeds are - Sandra Starling (an upcoming star who hooks up with Douglas Connelly in the hopes of him introducing her to famous directors and producers), Tom King (the owner of the restaurant - Tommy's Bistro - that Tracey had last worked before she had disappeared), Jack Worth (The plant manager), Rosemary "Rosie" Mass (The Connelly Sisters' Nanny when they were kids), Lottie Schmidt (Gus's wife), Gretchen Schmidt (Lottie and Gus's daughter), Dr. Ravi Patel (Kate's attending physician while she is in coma in the hospital), Russ Link (Who ran the plant in place of Doug Connelly until he retired five years ago), Celia Ramsey (Frank Ramsey's wife who becomes a key piece in the investigation), Steve and Annie Carlson (Jessie's parents), Clyde Hotchkins (a decorated Vietnam War Veteran who has been living on the streets since mid-1970s), Veronica Gordon (Jamie's mother), Justin Kramer (From whom Kate had bought the apartment) and Susan Connelly and Connor Connelly (Wife and Brother of Doug).

Uncommon to her previous books, there is a lot of repetition of text and context. Before you even finish the first 100 pages the disappearance of Tracey Sloan and the boating accident that happened so many years ago1 at least three times. I wonder why the author needed such repetition when she had never done so in her previous books. However the author does highlight about the post-traumatic stress disorder that war-veterans face and also the sufferings the street people face - albeit in a smaller scale. Around the time I reached the 45 chapter I kind of guessed who is behind the fire, but couldn't yet figure out what happened to Tracey or who killed Jamie.

1) In the acknowledgement section, Mary Higgins Clark talks about her magazine titled "Mary Higgins Clark Mystery Magazine". Somehow I missed this tidbit about the author even though I had read so many books of her. Sadly the magazine had died after seven issues. I will have to find these magazines somewhere and read them for sure despite the failure.

2) For a change the title of this book comes from popular English nursery rhyme and lullaby "Bye, baby Bunting". The rhyme on its own didn’t create any chills but the usage of it in this book caused several chills up my spine and neck. The modern version was this one:

Bye, baby Bunting,
Daddy’s gone a-hunting,
Gone to get a rabbit skin
To wrap the baby Bunting in

However there is more to it and Wiki explains it so well here.

3) There is a 1969 film with the same title and is a thriller too. It starred Carol White, Paul Burke, and Scott Hylands. Having not watched the movie, am not sure if any of the movie's plot seeped through to this book some 44 years later. Adding to my list to watch and post review. :)

4) The character name Mark Sloan and the chemotherapy center, Sloan-Kettering, that Celia Remsey and Lottie Schmidt went to reminded me of the character Mark Sloan in the 90s comedy mystery medical drama on TV titled Diagnosis: Murder. Dick Van Dyke had starred as Dr. Mark Sloan. (More about the show here). I watch a few reruns on Hallmark Channel whenever they play.

5) The author mentions about the book A Tree Grows in Brooklyn - a 1943 novel by Betty Smith. Hadn't heard about this book before but the excerpt shared in this book makes me think the book is a sad tale. Yet for some reason I am drawn to that book. Perhaps will read it soon.

6) The  beginning of Chapter 97 has a hospital scene which I distinctly remembering reading in another of Mary Higgins Clark's book. Can't seem to place a finger on it though.
Tags: books, critique by amateur, reviews
Subscribe