The Shadow of Your Smile is a thriller by Mary Higgins Clark published in April of 2010. This time around the author's plot revolves around a nun getting ready for the Beatification Ceremony and essentially will be titled a Saint herself, her miracle healing powers and a huge secret that could create scandals if revealed. 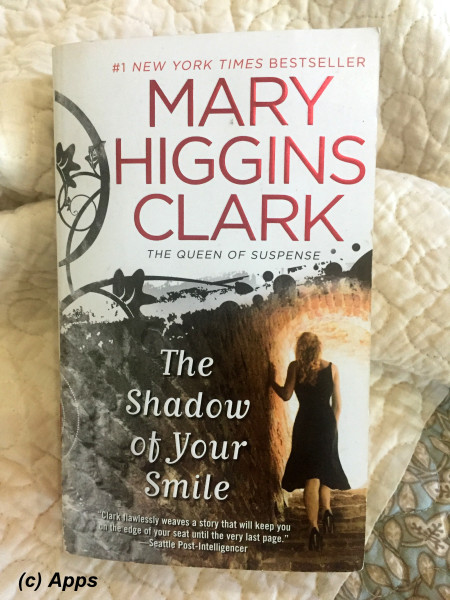 Olivia Morrow has just been told by her long-time friend and cardiologist Clay Hadley that she had little less than 3 weeks of life left. Her older cousin Sister Catherine has been famed for healing a child of brain tumor and was being considered as a candidate for beatification - essentially will be declared a saint. However Olivia knows her deep and darkest secret - Sister Catherine when was a young woman had given birth to a son in Ireland, then given him up before joining the religious order. Although now deceased, this secret could cause quite a scandal on Sister Catherine, as well as the Morrow family.

The son she had given up was adopted by the Farrells from Boston and named Edward. Now Edward's daughter Monica Farrell is the only one alive in that line - carrying the blood of Morrow family but the name of Farrell family. However Monica doesn’t know this family secret. The father of that child Edward, Alexander Gannon, had become a famous doctor, scientist and philanthropist. If Olivia brings this secret to light it would impact three families putting them in unknown turmoil and in a course of sensational scandal that could perhaps harm more than heal. Yet, Olivia is determined to let the secret out as she thinks that Monica Farrell is the rightful heir to all the legacy that Alex Gannon had left behind.

Monica Farrell is now a doctor at Greenwich Village Hospital. Although she believes in medicine, she doesn’t believe in miracles. However she is being called in to testify at the beatification of Sister Catherine about a patient whose brain cancer was cured after the parents crusaded on prayers to Sister Catherine. Monica was the one who had diagnosed the boy. Reluctantly she agrees to go and speak. In the meanwhile including Clay Hadley quite a few folks are nervous about Olivia revealing the secret. They take all the measures they can to stop her, even if it meant murdering both Olivia and Monica. But who is this "they"? Would they be successful? Will Olivia be able to reveal the secret? Will Sister Catherine get her beatification completed without any issues? Will Monica accept her past? In the meanwhile the SEC is investigating the Gannon Foundation. How will that pan out? What will it mean for the foundation and the dreams of Olivia having all that given to the rightful heir? But the tug of invisible war between Monica and the Gannon brothers doesn’t end just with the inheritance. The Gannon Foundation was reneging on the fund they were to give for children's foundation and now Monica was to face them to convince them. Will it be an opportunity to eliminate her permanently for the villains and blame it on the foundation?

It frustrated me that Monica was being blind that someone was trying to attack her and foolishly things them as unfortunate accidents. Come on how foolish can someone be. Otherwise the entire plot has been enjoyable. Similar theme that Mary Higgins Clark follows in every book, yet keeps you gripping to the book. A powerful combination the author has picked - miracles and god mixed with sins and scandals.

Spoiler Alerts:
1) As always all of Mary Higgins Clark's book titles are also song titles. And this time it is  a popular song that was first introduced in the 1965 film The Sandpiper with a trumpet solo but later became a somewhat hit song for Tony Bennett. This song was also called as Love Theme from The Sandpiper. This has been sung by many other famous singers later like Frank Sinatra, Barbara Streisand and others Here is the Tony Bennett version:

Here is the one from the film The Sandpiper:

2) Some of the hot spots in New York and New Jersey that the author takes us through:
a. Neary's Pub on fifty-seventh street. (http://www.nearys.com/)
b. The Pierre Hotel, New York (https://en.wikipedia.org/wiki/The_Pierre)
c. The Hotel Elysee on E 54th Street (http://www.elyseehotel.com/)
d. St. Regis Hotel on 5th Avenue (http://www.stregisnewyork.com/)

3) Very interesting words have been used in the book, some very new for me:
a. Demitasse - meaning a small coffee cup
b. Hassock - meaning an upholstered ottoman or footstool
c. Trestle - an open cross-braced framework used to support an elevated structure such as a bridge
Tags: books, critique by amateur, reviews
Subscribe