Trading Places is a 1983 American comedy film starring Dan Aykroyd and Eddie Murphy. The plot line is a modern take on Mark Twain's classing The Prince and the Pauper, only in this version the roles are swapped between an upper-class commodities broker and a street hustler at the whims of two people who own a successful brokerage on a $1 bet. The movie had been nominated for several awards but the winners were Denholm Elliott and Jamie Lee Curtis won the Academy awards for Best Actor in a Supporting Role and Best Actress in a Supporting Role that year. 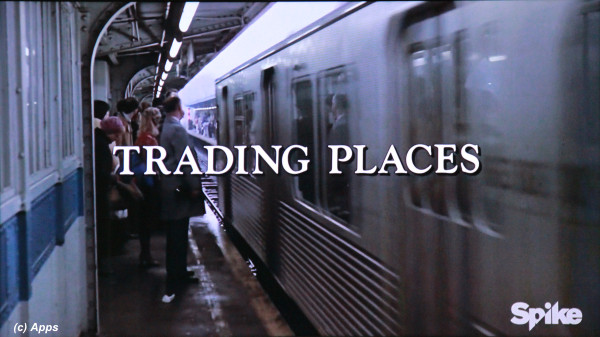 This movie came into my mind while I was posting reviews of other movies. First one being for the 1940 American screw-ball comedy film His Girl Friday. Ralph Bellamy who plays the role of Randolph Duke in Trading Places played the role of Bruce Baldwin in this movie - fiancé to the lead actress. While Denholm Elliot portrays the role of Marcus Brody - a museum curator - in the Indiana Jones series although he played the butler to Louis Winthorpe III. Being mentioned several times in my reviews, I thought finally it was time to write about the movie in question.  So here it goes. Enjoy!

Brothers Randolph and Mortimer Duke (portrayed by Ralph Bellamy and Don Ameche respectively) own a successful brokerage company in Philadelphia. One day they witness an altercation between Louis Winthorpe III (portrayed by Dan Aykroyd) - their managing director and also engaged to their grand-niece Penelope (portrayed by Kristin Holby) - and a street hustler Billy Ray Valentine (portrayed by Eddie Murphy), - who Winthorpe gets arrested for robbery. This incident brings up the long-standing argument between the two brothers - about nature vs nurture. They wage their "usual amount" in testing out their theories by swapping the lives of Winthorpe and Valentine. Overnight Winthorpe becomes a drug dealer, thief and a philanderer while Valentine becomes the managing director of the Dukes' brokerage company. In this conspiracy they are helped by Clarence Beeks (Paul Gleason) who also works for the Dukes in their security company. The rest of the plot revolves around how Winthorpe and Valentine realize the what the Dukes have done and how they take them down. Just like how the Dukes have allies, Winthorpe and Valentine find in Ophelia (portrayed by Jamie Lee Curtis) and Coleman (portrayed by Denholm Elliott).

The opening credits show the contrasting lives of the rich and the poor during the festival season watched over by the myriad of statues and art work around the city of Philadelphia. The basic theme of the plot is shown hidden behind the scenes. A lengthier one if I may say going upto approximately 4 mins. The background played in the background is from the The Marriage of Figaro (More about it here) - the opera's overture is played.

Both Winthorpe and Valentine are arrogant, bossy and self-centered in their own ways despite one coming from an educated upper-class side while the other coming from the streets. The swap in their lives teach them some lessons as well although almost comes at the cost of Winthorpe's life. Also shows the stark difference between how one who comes from everything takes everything from granted and how one comes from nothing appreciates when everything is given; again also shows that when one loses everything also starts appreciating them. Well-chosen cast, impeccable performances and the timing of comedy and drama fits seamlessly in the plot. Hidden behind the mask of comedy, what this movie profoundly shows is that everyone should be judged equally, no matter what race, color or status could be; prejudice is something everyone should put it aside.

All in all a movie filled with humor, satire and a deep-hidden powerful message. Thoroughly enjoyed it watching - time and again. :)
Spoiler Alerts:

1) I remember seeing Don Ameche in one of Columbo's episodes. He portrays the role of Frank Simpson - an estate attorney to Edna Matthews - in the 1971 episode Suitable For Framing.

2) James Belushi portrayed the role of a party-goer on New Year's Eve. I remember him in many many movies and TV Shows for several roles. (The Guy in Black costume in the picture) 3) Kelly Curtis - Jamie Lee Curtis' sister - has a brief role as Muffy, one of Penelope's friend. The song sung by Todd, Harry, Andrew and Phillip - the four supposedly friends of Winthorpe - in a comical lyrical fashion is very cute. Muffy is seen in this scene. 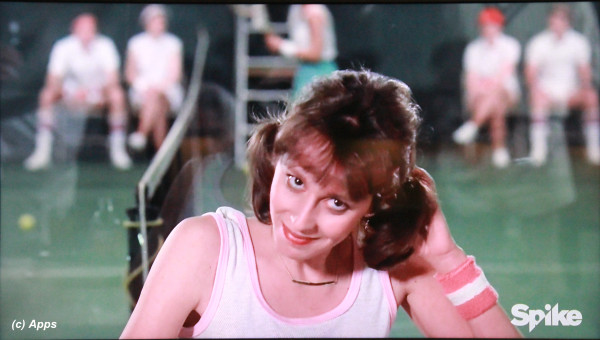 4) Giancarlo Esposito has a brief role of Valentine's cell mate in the movie. However I remember for his role as Senator Billing in the 2006 American comedy film Last Holiday. He also gave voice to the character Akela in the 2016 American hit live-animation film The Jungle Book. (The kid behind Eddie Murphy in the picture below.)