Madison Avenue Shoot is the 31st book in the Murder, She Wrote series by Donald Bain and fictional writer Jessica Fletcher based on the popular TV Show of the same name. The book was published in March of 2010. The time around the plot is set in New York but with the added pleasure to see Grady Fletcher and his family along with Jessica. 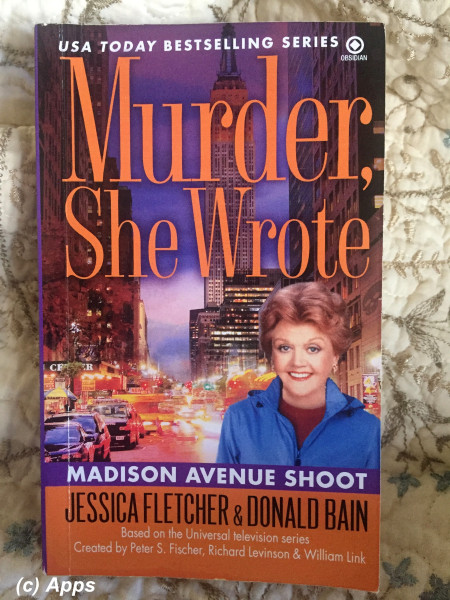 Jessica Fletcher arrives in New York City from her book tour in Chicago for a bit of business and a bit of pleasure. Business being with regards to her upcoming book while pleasure being meeting her nephew Grady Fletcher, his wife Donna Fletcher and their son and Jessica's grandnephew Frank - named after Jessica's long-ago passed away husband. Grady is now working for a company that deals with accounting for production companies as well. One of the company is Eye Screen is shooting a commercial in a week. And Grady ropes in to have Jessica be in on their shoot for the international credit card Permezzo - despite Jessica's protests. And then Jessica comes to know that Matt Miller, her literary agent, was getting a new client - Anne Tripper - who was one of the other celebrities in the commercial. Was Matt spearheading this commercial? Or was he just having two of his authors in that? What is he hiding or gaining by this? Anne is using the commercial to promote her new book which even Matt doesn’t have an idea about it. What is that plot based on? Another expose?

As everyone was settling in the making of the commercial, Grady finds out that his company has not been paying Mindbenders their paychecks as it should be. He is trying to dig through it and sort it out, but Jessica worries that something bad was going to happen to Grady - like as always. While everything seems to be going well despite the pressure Grady was in, and Frank having fun at the set, surprisingly Jessica too, Jessica and Grady find the body of Betsy Archibald - who was rather rude and loud with everyone. In the midst Frank goes missing and Grady is taken to the police station suspected of murdering Betsy Archibald. Jessica is again in thick of it - this time not only to solve the murder but to find her grand-nephew Frank and free Grady of the suspicion. Quite a set has Jessica landed into - literally. Detective Chesny along with Officer Rubins and Officer Lasker are assigned on the case. But that doesn't deter Jessica one bit.

Some of the fun characters we get to meet as the plot proceeds along are - Michele (Italian neighbor and friend to Frank), Carl (Grady's boss), Anne Tripper (Author of industry exposes), Stella Bedford aka Cookie (who hosts a cooking show on TV as well as has her own cookbooks), Lance Sevenson (a TV mystic who hosts his own show as well), Matt Miller (Jessica's literary agent), Betsy Archibald (Chief Creating Officer for Mindbenders company who are doing the commercial for Permezzo), Kip (one of the creative artist at Mindbender), Antonio Tedeschi (Permezzo's President and Chief Marketing Officer), Jimbo Barnes (Stella's manager), Daniel Howerstein (Producer of the show), Jason and Lucy (Production Assistants), Lena (Lance's assistant), Kevin Prendergast (one of the principals of Mindbenders), Alice Evans (another production assistant), Dave Fitzpatrick (Second assistant director) and Adam Akmanian (The director of the commercial). As always Jessica is supported by her friendly Cabot Cove neighbors - Dr. Seth Hazlitt and Robin Stockdale (drama teacher at the high school).

Who killed Betsy Archibald? What was the expose Anne Tripper going to reveal in her new book? Has that any bearings with the murder? Where did Frank disappear off to? Had he witnessed any murder? Was the killer his kidnapper? The rest of the plot continues on how Jessica unravels the mystery.

The author has cleverly extended the Fletcher family by introducing to the son of Grady Fletcher. In the TV Series we see Grady getting married and also has a child but the series ends with Frank being a months baby. Nice to see the next generation with this plot. I also liked the fact that the author through Jessica talks about changing in what the norm is. For instance - Putting the phone on vibrating mode at dinner table is the preferable choice by Jessica as opposed to what the folks are doing now.

Another successful mystery by Jessica with the right elements to keep you interested and hooked to the book.

1) I wonder in which book Jessica no longer had a residence in New York. This book claims that she doesn’t live in NYC any more.
2) Interesting to see an actual script in the plot, albeit it is for the show only. :)
3) Jessica wonders if children screamed for ice cream with this little rhyme "I Scream, You Scream, We all scream, for Ice cream". Not to worry Jessica, my nephews do that now so it’s a legend being passed down. :)
4) Jessica mentions about a time when she was in France on an extended holiday but ended up being a working holiday as she tries to solve the murder of the chef of the cooking school. The plot is covered in the 17th book Provence - To Die For, which I am yet to read.
5) Jessica also talks about her trip to British Columbia and ended up solving a case. This plot is covered in the 20th book Destination Murder which I am yet to read.
Tags: books, critique by amateur, murder she wrote, reviews
Subscribe