Stars:  3 / 5
Recommendation: Certainly an adventure but not a fun one to watch human depravity and violence.

Indiana Jones and the Temple of Doom is a 1984 American action-adventure film directed by Steven Spielberg. This is the second film of the four movies produced under the Indiana Jones film franchise, albeit this forms the prequel to the first movie Raiders of the Lost Ark that was released in 1981. The film created a lot of controversy mainly because of its projection of Hinduism and India. It was also criticized for the amount of violence shown for an action-adventure film. 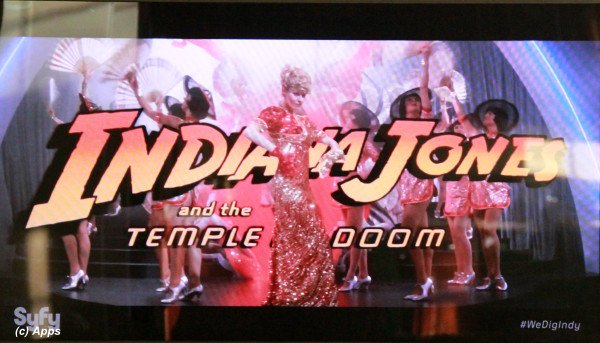 A year before Indiana Jones was recruited by the Army intelligence agents to hunt for the Ark of Covenant, Jones meets with Lao Che in Shanghai, China. He narrowly escapes from his clutches  along with the Diamond he had come to retrieve, his 11-year old Chinese sidekick Short Round and the nightclub singer Willie Scott in Lao Che's plane but loses his friend to Lao Che's bullet. However, the pilots dump its fuel and parachute out letting it crash into the Himalayas. Jones again narrowly escape the crash along with Short Round and Willie on an inflatable float and float ashore a desolate village, Mayapore, in northern India.

The Shaman of the village and the people think that Lord Siva sent Indiana Jones and his two friends to the village to help them in retrieving their Sivalinga which is currently being held in the Pankot Palace. Along with the stone, the village's children are also stolen by the evil forces residing in the Palace. Being an adventurer and also an empath, Indiana Jones takes it upon his shoulders to bring back the sacred stone as well as children to the villagers, despite Willie and Short Round's objections. Thus continue Jones's adventures along with its share of hurdles and villains.

Their adventures introduce them to Chattar Lal - Prime Minister of Pankot Palace, Maharajah Zalim Singh - a young boy crowned King and Mola Ram - Thugee priest who practices the rituals of human sacrifice as part of the Thugee cult. Wilhelmina "Willie" Scott is a spoiled American night club dancer stuck in Shanghai, China. She poses as a damsel in distress to Indiana Jones as she gets forced to get tagged along with him from China to the Himalayas. Kate Capshaw has played it to the mark. However, no matter how much I research I could not find which other film I saw her in.

Although a well-made plot with it's comic relief and appropriate villains, this particularly did not show my birth country in a positive light. The country I come from has thousands and thousands of centuries of history, tradition and culture that one cannot explain in one's lifetime. What one calls superstition was perhaps the only way to make common man listen to and follow the unknown and unexplainable in the past when education was only spread mouth to mouth rather than through script. And yes there have been those evil folks who have twisted these to their benefits. It pained to see my country projected thus. Yet to be fair there are cities in that state even now where beliefs and customs are twisted. So also has every country in the world - both rich and poor side-by-side. The banquet served to Jones and company by the Maharajah has weird and bordering on grotesque with all kinds of animal meats and insects on the table. I believe the director mistook the Indian culture with African tribal culture. Definitely the food served would not be a common palate in India as far as I know. That is the only negative side of the film I could write about. If not that it is a thoroughly enjoyable movie.

A bold movie with the dark side of humanity along with fun depicted so seamlessly that it glues me to my sofa no matter how many times I watch it. Indeed a lesser likeable than the first one, yet it has the adventure that makes you watch. The CGIs are also not so effective as the first film had. All in all a good enough movie to watch at your leisure.

1) The screenplay for this film is loosely based on the 1939 American action-adventure film Gunga Din.
2) Amrish Puri portrays the role of Mola Ram. Although his character is named after a 17th century Indian Painter (More about that painter here), his getup reminds me so much of Mogembo - his role from the 1987 hit Indian film Mr. India. 3) Roshan Seth who portrayed the role of Chattar Lal in this movie also portrayed as Jawahar Lal Nehru in the 1982 hit biographical film Gandhi. But I remember him mostly as Jawahar Lal Nehru in the 1988 53-episode Doordarshan (Indian TV Channel) Series Bharat Ek Khoj. I used to watch these episodes as it would show history, heritage and culture of India. (More about the show here)
4) Although the movie was about India, it was shot mostly in Sri Lanka and London as India had not agreed to be shot for such a violent and dark script.
Tags: critique by amateur, indiana jones, movies, reviews
Subscribe