Stars: 4 / 5
Recommendation: So you like the Gods and Wars, the underworlds and aboveworlds, then this is another trilogy that you don’t want to miss.

The Serpent's Shadow is a 2012 fantasy adventure novel by Rick Riordan. It is the third and final installment in The Kane Chronicles trilogy. The series is in a narrative format recorded on a tape by two siblings Carter Kane and Sadie Kane chronicling their adventures. The narration continues in the third part too. As with the first part the author does have a disclaimer at the beginning of the book about this being a transcript of the second audio recording sent by the Kane siblings. 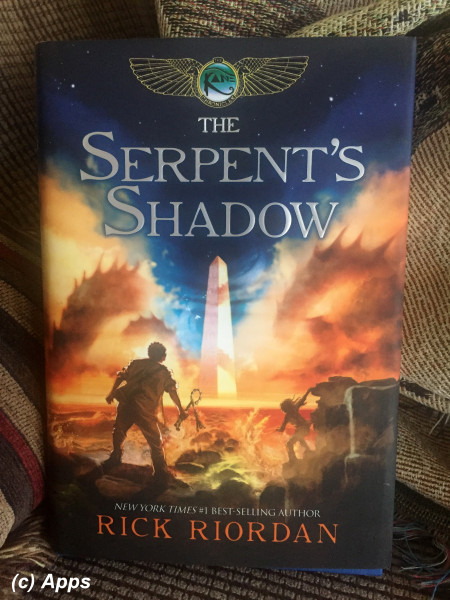 From the first two books we know that 14-year old Carter Kane and his 12-year old sister Sadie Kane are descended from the powerful ancient Egyptian pharaohs  Narmer and Ramesses the Great. They are also hosts to Egyptian Gods Horus (by Carter) and Isis (by Sadie). The other three Gods - Osiris (hosted by Julian Kane, the siblings father), Nephthys (Zia Rashid hosts her) and Set are also out now. Apophis - The Serpent of Chaos - tries twice to get out of his prison and unleash Chaos in this world unbalancing the Ma'at causing the destruction of world and worlds alike. They have awaken Ra - the Sun God - and made him the leader of gods dethroning Horus. Not all gods were pleased about it nor the magicians agree that Amos will be the Chief Lector now. No matter how good the change is and the path taken by Kane Family is the right one, they have a long road ahead before they can unify the Gods and Magicians. In the meanwhile Apophis is working on coming back again. Let's see where the third book takes these brave siblings.

Ever since Apophis has escaped from the Underworld prison, even though he had been execrated by Desjardins, he has been attacking the peaceful Nomes all-over the world and gradually causing Chaos. Although everyone expected him to do a full-blown attack. Now the Kane siblings, Walt Stone, Alyssa, Felix, and Khufu reach the Fifty-first Nome in Dallas, Texas ruled by JD Grissom. They are trying to save the Nome by taking away the copy of The Book Of Overcoming Apophis whose copies Apophis has been systematically destroying while demolishing those Nomes. At the very last minute when they try to take the book, Apophis attacks. Although Sadie manages to create Ma'at to counterbalance the Chaos he is creating, Apophis doesn’t leave before he completely demolishes that Nome as well and burns away the copy leaving the Kane siblings and their team with a Golden Box. The box contains the Shadow of King Tut, but how is that helpful in their quest? How can they find a way to defeat Apophis? Meanwhile Zia is babysitting the senile an demented recently awaken Ra and also Amos is fighting off the attack on them through the hoard of magicians who have considered the Kanes and anyone supporting them as traitors. They get unexpected help from Leonid - the Russian magician who had helped them at the Hermitage Museum in the previous episode - although they trust him a bit less as he belonged to Vladimir Menshikov's nome. Yet, they take his help who tells them that Sarah Jacobi and her followers are looking to attack the First Nome in Egypt.

Finally the character of Sadie remediated a bit for me. She still comes off very selfish and impulsive but she has matured quite a bit along the journey. I do empathize with her in her confused situation between Walt and Anubis, but she still grates under my skin sometimes.

The series overall was rather slow and repetitive for me as its similar to Rick's books on Greek and Roman gods. Frankly speaking I couldn’t wait for the ending while I read the first two books. However the third and final installment grabbed all my attention. It was worth going through the slow ride of the first two books. There are some really stunning scenes and plots in this book that leave you reeling.

A very good ending to the journey and quest the two Kane siblings have been on for months together. Loved this leg of the journey better than the first two. As always enjoyable none the less.

1. Mid-way through this book I finally figured out what god that Walt Stone was going to invoke and how the only option can keep him alive but with a huge risk.
2. Grammatical Errors:
a. Pg. 207, para 4, missing "to" in line 3 at "He wants pull"
b. Pg. 244, para 2, last line phrasing is all incorrect. It should be "They would've to be quite insane…."
3. Zia Rashid - Finally there is a proper closer for Zia / Ra in this book.
Tags: books, critique by amateur, kane chronicles, reviews
Subscribe