Stars: 3 / 5
Recommendation: So you like the Gods and Wars, the underworlds and aboveworlds, then this is another trilogy that you don’t want to miss.

The Throne Of Fire is a 2011 fantasy adventure novel by Rick Riordan. It is the second installment in The Kane Chronicles trilogy. The series is in a narrative format recorded on a tape by two siblings Carter Kane and Sadie Kane chronicling their adventures. The narration continues in the second part too. As with the first part the author does have a disclaimer at the beginning of the book about this being a transcript of the second audio recording sent by the Kane siblings. 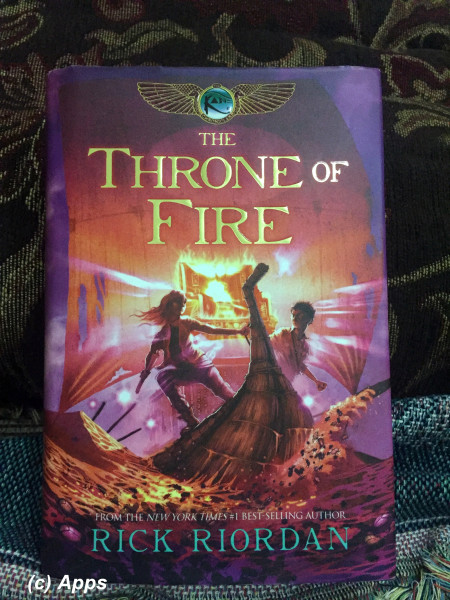 From the first part we know that 14-year old Carter Kane and his 12-year old sister Sadie Kane are descended from the powerful ancient Egyptian pharaohs  Narmer and Ramesses the Great. They are also hosts to Egyptian Gods Horus (by Carter) and Isis (by Sadie). The other three Gods - Osiris (hosted by Julian Kane, the siblings father), Nephthys (Zia Rashid hosts her) and Set (originally hosted by Amos Kane, the siblings Uncle and then sent to the Duat to prevent further chaos) - are also out now. However the biggest threat is Apophis - The Serpent of Chaos - who had been trying to control Set and cause an apocalypse across the world - perhaps worlds. And the siblings work together in harmony with the Gods to send Apophis deep somewhere in a prison for now. And the Demon Days (last five days of the year) pass through with less than expected damage to the world and several lives. But the siblings could not rescue their father nor find where Zia is nor get Amos to normal. And the House of Life - consisting of powerful magicians - are about to fight the Gods and stop what the siblings are set out to do. The second part in the series takes us through another journey by the Kane siblings and perhaps get some answers to these questions and also closer to defeating Apophis.

The plot in this part opens with Sadie, Carter, Jaz and Walt in Brooklyn Museum, NY stealing - rather borrowing - the statue of Khnum (ram-headed God) who can help them in finding the Book of Ra. They find the first piece of the book in the part of a scroll but in the process stir all the curses that were in and around the museum protecting every artifact, set the museum on fire, set free a hummingbird-Griffin and release seven evil spirits called bau - The Arrows of Sekhmet. However according to the vision Carter had they have only five days to wake up Ra - The Sun God - before Apophis rises and eats up the Sun creating total Chaos. Sadie however goes to London the following day to celebrate her birthday with her Grandpa and Grandma - against the wishes of Carter or Amos - while they prepare for the upcoming battle with Apophis as well as Desjardins - The Chief Lector of House of Life. Spring Equinox and days coming up to it are very powerful, and also the time when Chaos and Ma'at could be tipped easily and the scales imbalanced. Apophis would make every attempt to come out at that time from his prison when it is at its weakest state. The Kanes and the trainees with Bast (the Cat Goddess) and Khufu (the Baboon) are all they have to each other to plan, prepare and fight against this evil god and save the world and worlds alike.

Will Carter and Amos successfully prepare for the coming battle? Will Bast be successful in ensuring that the prison that Apophis is held in is still intact? Carter had never stopped searching for Zia Rashid - the girl who had been on their side in the bringing Set down. She had been kept hidden away by Iskandar - the previous Chief Lector - somewhere in Place of Red Sands and is in deep sleep. Now the Arrows of Sekhmet and the scarab serpent form that attacked on Brooklyn House - the twenty first nome in New York - hinted to Carter that Zia would be in mortal danger if he didn’t stop his quest. Are they talking about Zia? Where is Zia? Is she hosting Nephtys - another god? Sadie and her friends - Liz and Emma - are pursued by Nekhbet - the Vulture Goddess - who takes over her grandma and Babi - the god of baboons - who took over her grandfather, when she goes to visit them for her birthday. Will they escape them and find help? Will the Kanes meet together again? Will they find the remaining two sections? Will they wake up Ra? How does this journey end for the Kane family? What is the story of Walt? How does he tie in with this journey? Set, Isis, Horus, Orisis and Nepthys have their roles too in this part.

Apart from the folks that we are introduced to by Carter and Sadie in the first part, a few more that we get to see with this installment - Jasmine AKA Jaz (one of the two trainees under Carter and Sadie), Walt Stone (one of the two trainees under Carter and Sadie, can do magic with any of his amulets), Julian (Another trainee from Boston and taking the path of Horus -the falcon god - in earning magic), Alyssa (a trainee from California and taking the path of Geb- the earth god - in learning magic), Sean (a trainee from Dublin), Felix (Another trainee who loves penguins), Cleo (another trainee from Rio de Janeiro), Vladimir Menshikov (Third most powerful magician ruling the Eighteenth Nome in Russia and right hand man to Desjardins), Bes (The God of all Dwarves - and he is indeed a dwarf, a pretty ugly dwarf), tjesu heru (a snake that Vlad summons to kill the Kane siblings), Appius Claudius Iratus aka Mad Claude (a Russian ghost in the Golden Mummies), Ptah (the patron God of craftsmen and artisans), Khnum (protector of the Fourth Gate in Duat),  Tawaret (a goddess shaped as a hippo who takes care of old gods at Sunny Acres and a at one-time sweetheart to Bes), Khepri the beetle (the last scarab from Ra), Khonsu the moon god, Freak (the humming-bird griffin).

Sadie still irritates me with her impulsive nature. One would think with so much at stake one would learn to act after considerable thinking. And she comes off very selfish. I wonder why the author created such a character. Of course I agree that she is just a 12-year old kid with a huge responsibility. But with one war already faced shouldn’t the character have matured a bit. Aargh!

A decent sequel for a hit writer but like I said in my previous book's review, it seems so similar to his other books on Greek and Roman gods. It was enjoyable at some places, and I dosed off in some chapters.

1. Places that we travel along with Carter Kane and Sadie Kane:
a. Brooklyn Museum in New York City, NY that has the largest collection of Egyptian exhibits. More about it here
b. Hermitage Museum in Saint Petersburg, Russia - another location of largest Egyptian collection in Russia. More about it here
c. Dvortsovyy Bridge aka Palace Bridge that spans the Neva river in Saint Petersburg, Russia. More about it here.
2. Khnum - ram-headed god - was one aspect of Ra, the Sun God. The other two aspects were Khepri - the scarab god - in the morning and Ra during the day. Khnum was his aspect at sunset.
3. Grammatical Errors:
a. Pg. 110, para 4 (big one in the center of the page), line 4 - there is a missing "you" in the line "But if want the scroll…"
4. Zia Rashid - In the end I am still left a little clueless as to who Zia Rashid was? Perhaps we will get to know in the final chapter about her role in all of this.
5. A board game called Senet is played by several of the characters in various chapters in the book. It is a board game from ancient Egypt. Would love to see if it is still played now. More about it here
6. A place of old gods called Sunny Acres is shown in the plot. It is so similar to how home for old ages are in mortal world including the syringes and IV bag. Except it was for older gods or forgotten gods. A very unique concept but does make one think of all those gods that were worshipped at one time but no one remembers now in the modern world.
7. Khonsu, the moon god, is depicted vicious and cunning making one hate the moon. I wonder why he was depicted evil when I did not see that in any other legends from Roman, Greek or Indian.
Tags: books, critique by amateur, kane chronicles, reviews
Subscribe