Stars: 3.5 / 5
Recommendation: So you like the Gods and Wars, the underworlds and aboveworlds, then this is another trilogy that you don’t want to miss.

The Red Pyramid is a 2010 fantasy adventure novel by Rick Riordan. It is the first installment in The Kane Chronicles trilogy. The series is in a narrative format recorded on a tape by two siblings Carter Kane and Sadie Kane chronicling their adventures. The author does post a warning at the beginning of the book with a disclaimer that this is a transcript of a digital recording. :) 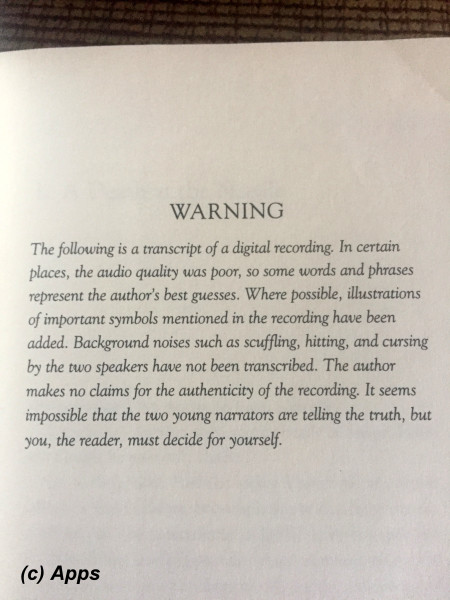 The plot opens with Carter Kane and his father Julius Kane picking up his sister Sadie Kane from their maternal grandparents and head towards the British Museum in London. Carter and Sadie although siblings have been separated after their mom died mysteriously. In the custody battle Julius could win Carter and Sadie was taken over by their maternal grandparents as they could only afford one child. Not that either of the child were neglected. Both had their own adventures in their life. But they are about to be on the biggest adventure or quest of their life. 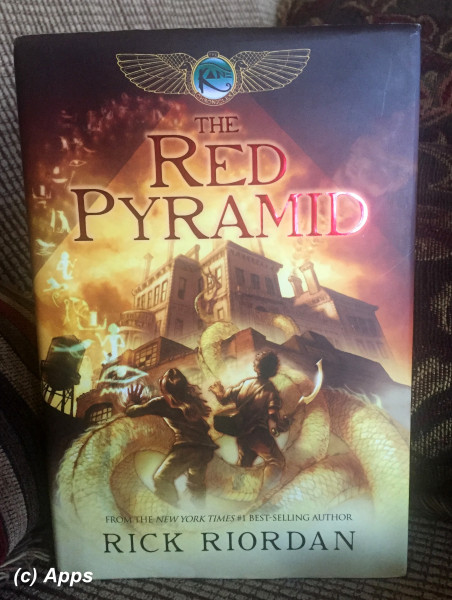 At the British Museum, Julius invokes the Rosette Stone in the museum with some words that Sadie seem to understand although she had never been to this side. Instead of the intended ones, Julius releases five fiery men with two superimposed images - one of a human with pale skin and cruel glowing red eyes; and another of a somekind of animal resembling a dog or wolf or lion - Red Lord aka Demon God Set, one of whom currently traps Julius in a tomb and had it sunk into the ground. The only thing that was left of Julius was his toolbox - a bag actually - that Carter had never peeked into it, but apparently contained quite a lot of stuff - magical and otherwise - inside. Then two people appear before Carter and Sadie go unconscious - a creepy frenchman and a girl with knife. Where did their father go off to? Was he dead? Who was the fiery man? Who were the two people who wanted to kill Carter and Sadie too? Or were they wanted to kill?

They, along with their cat Muffin, are taken with their Uncle Amos to Manhattan - the Twenty First Nome - to harness their powers and learn magic. The evil fiery man is making his base on Camelback Mountains in Phoenix and is preparing to unleash the greatest storm ever on his birthday. Sadie and Carter Kane are the most powerful children according to Amos, as they are a culmination of both Kane (Julius Kane's family) and Faust (Ruby, kids' mom) families - two powerful families of magicians since the beginning of time. Now who is after them? Why is Set bent on acquiring them? Will their powers be awaken? Can they be trained to be magicians? Where does this journey lead Carter and Sadie Kane?

Siblings Carter and Sadie meet quite a few interesting folks and mythical / magical creatures along the way - Amos (one of the men who had warned Julius and infact tried to stop), Dr. Martin (The British Museum curator), Khufu (Uncle Amos's Monkey Butler), Philip of Macedonia (an albino pet alligator at Amos's palace), Serpent Leopords aka Serpopards, Bast (the Goddess of Cats), Serqet (scorpion goddess), Zia Rashid (the girl with the knife), Michel Desjardins (French man with a forked beard), Chief Lector Iskandar (Chief of House of Life in the First Nome in Egypt), Anubis (The Boy from Hall of Ages, the God of Funerals), Nut (The Sky Goddess), Set Animal (one of the minions of Set God that is sent to kill the Kane siblings), Face of Horror (Another demon working for Set), Thoth (The Egyptian God of Writing and Knowledge),  Bloodstained Blade (the Captain who steers their boat to the Land of Death), Shezmu (bloody lion-man demon in the Land of Death - Lord of Blood and Wine), Ammit the Devourer, Mel (a Magician working for Desjardins), Sobek (God of Water and Rivers), Geb (The God of Earth), Sekhmet (Eye of Ra) and Apophis (The Serpent of Chaos that Bast had been fighting for eons)

After wading through the Roman and Greek Gods and their offspring, this time around Rick Riordan takes us through the Egyptian Gods. And his main character is an African - American opposed to his other books. A string of artifacts related to Egyptian Gods are shown to us in this journey.  Sadie sounds so irritating often-times and with a lot of defiance even when she is wrong. She started to grate under my skin. Carter proves worthy of the character. A journey that starts at one places takes us to so many distinct locations between Earth and Sky and everything in middle and under, keeps us glued to the book. It was a slow start but as the story progressed it did pushed through fast. I did feel though that it was keeping with the same format as the Percy Jackson Books and the Heroes of Olympus books. Nothing new, same pattern.

Even then another hit from Rick Riordan that only gets better as the plot progresses. A definite pick if you have already dug into the Percy Jackson books and the Heroes of Olympus books.

1. Carter and Sadie's journey takes us through quite a few interesting places.
a. Cleopatra's Needle in London - Looks like there are a few of these all over the world like in New York, Alexandria and London. More about it here. This is definitely something to add to my travel list.
b. Another pair of Obelisk (similar to Cleopatra's Needle) also in Paris and Egypt.
c. Rosette Stone at British Museum - Apparently has three scripts that connect the ancient languages to the modern. More about it here.
d. Pyramid Arena in Memphis, TN (More about it here.
2.  The fiery man calls Julius as Osiris - the same word that was being written by Julius on the Rosette Stone when he was invoking it. This should have given the first clue to the reader about who Julius aka Osiris would have been. :P
3. The original Egyptian calendar had only 360 days in a year. The author shows a legend on how the Sky God - Nut - added the five days at the end of the year. They are called as Demon Days per the Egyptians lore. The Earth God, Nut's husband, was called Geb. In those extra five days Nut gives birth to five kids - Osiris, Horus, Set, Isis and Nephthys.
4. Iskandar in one of the chapters explains that Gods have power but need hosts to use them. So they host in humans, animals, birds, insects, statues and other stuff. However they prefer humans / people as they can not only use power but be creative. Very rarely they are in pure form. This explains the theory of so many powerful people in every history and legend, so many idols and stones considered filled with power and so many legends repeating again and again in different forms and lore but still remain the same plot.
5. Carter Kane is apparently a fan of L. A. Lakers. He uses the numbers of three retired Lakers - 13/32/33 - for his locker combination. They belong to Chamberlain, Johnson and Abdul-Jabbar respectively.
6. The history and myths surrounding Ra (The Sun God) and the Egyptian setting reminded me of the 1994 American Sci-Fi Adventure film Stargate. That was the first film I had seen when I had come to United States in 2001, albeit it's on TV. Left a mark so distinct in my memory that I can still hear the dialogues and see the scenes of the movie playing by. Perhaps should add this to my blog of reviews. :P
7. Zia Rashid - In the end I am still left clueless as to who Zia Rashid is? Why Iskandar was protecting her? What is her story? Perhaps we will get to know in the next two installments.
8. On Pg. 435, Para 4 the last line "I didn't want to ruin my new plaything quite so soon" touched some string in my memory related to another book. I read the same line somewhere but I am unable to point it.
Tags: books, critique by amateur, kane chronicles, reviews
Subscribe