Stars: 4.5 / 5
Recommendation: A medley of natural and supernatural elements mixed with human emotions, all twined together into a thick thread here. Definite pick.

My mom's birthday is on September 9th. So for that day I wanted to post review of a book by one of her favorite authors. We had a semi-library kind that my parents had filled with novels that they read in weekly magazines. Every week they used to buy magazines like Andhra Bhoomi, Andhra Prabha, etc. and follow the novels printed as episodes by famous authors like Yaddanapudi Sulochanarani, Yandamuri Veerendranath and others. They would cut the pages from the magazine and once the novel was finished, get all the pages bound into a book. Apart from these they would buy paperbacks and get them bound too to protect them. I remember reading a few when I was living with them. All of these were in Indian language Telugu - my mother tongue. Knowing their tastes, it was natural for me to lean towards Yandamuri Veerendranath. Hence this book and thus the review.

Duppatlo Minnagu ( = A Serpent inside a Bedsheet) is a 2004 Telugu novel by Yandamuri Veerendranath. The plot is a reunion of five friends who are stranded at an airport and tell stories to pass the time. It doesn’t seem so simple as the plot proceeds. 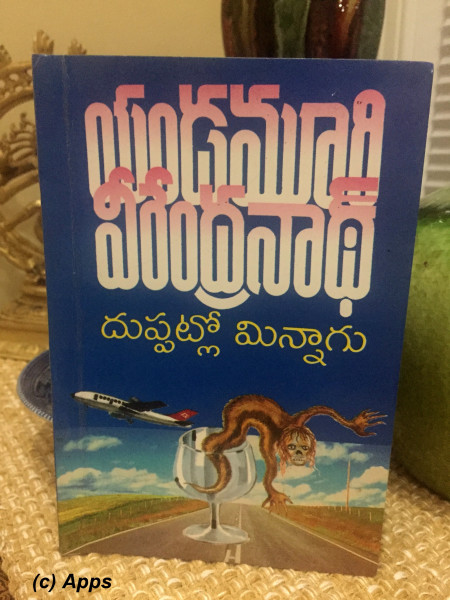 The plot is written in a narrative mode, the narration being done by one of the five friends. The five friends in question are Venku, Shiva, Sheshu, Vijji and the narrator (whose name is not revealed in the beginning). Venku and Shiva are forest officers. These five friends are what they call typical drinking buddies and haven't had been in touch with each other in a long time, which is the reason for the reunion.
The narrator is primarily residing in the city of Dibrugarh in state of Assam, India. The narrator had recently lost someone close to him by name Arundhati. So the reunion came as a refreshing break for him. The friends decide to have their reunion in Shillong - city in the state of Meghalaya, India - but get stuck in the Gauhati (another city in Assam) airport. They havent met each other in a year, so they had a lot to catchup on. Once that was finished, they decide to swap tales. But Vijji challenges everyone that the stories should be suspense thrillers, closely resembling real-life experiences and whose ever story is with the weakest plot will have to pay the bill for that night. Challenge accepted the stories begin.

First tale is from Shiva and titled Duppatlo Minnagu (incidentally the title of this book is the same). His story is set in Bhadrachalam - city in the state of Telangana, India. Shiva being a forest officer, his plot is also set in the forests surrounding Bhadrachalam. Six of the forest officers have been stationed in those forests. One day they decide to go to the city to watch a movie - second-show since it was Sunday the day after. However when Shiva goes to get hold of one the officers, Ramabhadram aka Bhadram, he comes to know that a serpent has crawled on to his stomach under his bedsheet and is sleeping there now, and he has been lying like that for almost an hour. Rest of the plot continues in how Shiva tries to rescue Bhadram, and the suspense hangs with the finding of the snake.

Second tale is from Vijji and titled Oda Prayanam ( = Journey by Ship). His tale is about Daivadheenam who took the ship from Europe to Madras, India and filled with incidents that Daivadheenam faced aboard. The suspense is not how he finds a solution for his problem. It is in how the solution is implemented and if he would be successful.

Third tale is from Venku and titled Manavateeta Vyakti ( = A Human Beyond Human). The plot is a dinner setting where five folks are attending - the narrator assuming its Venku, Rammoorthy (the host), Rammoorthy's wife, his 16 yr old daughter Aruna and the guest of honor Venkatesh. Venkatesh is supposed to possess with skills beyond human and an excel as a magician, unmarried and a very self-conceited person. The key reason for Rammoorthy to invite Venkatesh was to smash his magical abilities with facts and make him feel nothing. The suspense is not if Rammoorthy wins or Venkatesh wins in the debate, it's whether Venkatesh gets beat at his own game or if Rammoorthy finally meets his match.

Fourth tale is from Sheshu titled Verandah Kurrodu ( = Boy in the Verandah). It's about a housewife Radha who is apprehensive about the new tenant Ravi Shankar that her husband Vishwanatham approves. The suspense is not what the tenant would do, it's the suspense of how Radha's wild imagination goes haywire playing double time.

Fifth and the last tale is from the narrator titled Antarnetram ( = Inner Eye). The plot follows the final moments of Rangarao who was suffering from blood cancer and the lengthy letter he writes to his wife Arundhati before his death. The suspense is not what is in the letter but what measures they take in those final days.

Once the tales end, the plot continues with the five friends discussing on whose story had more suspense, who won the bet, who lost the bet and also analyzing their tales. But none of them are aware of the final showdown that awaits them at the end.  So, who won the bet? Who lost? Who got the more shocking revelation? What is the fate of these five friends at the end? How will they face the showdown? All in good time you will know once you read this interesting novel.

I haven't read a Telugu novel in a long time so the beginning of the reading went a bit slower for me - more because I was trying to grasp meaning of some words that sounded complicated for me and also getting to read it fluently. But as the novel progressed, I picked it up faster than I thought I would. It's been a long time I read something in my language - clearly I need to improve on that.

Bordering on horror but still keeping the suspense element and bringing in the beyond human skills and abilities constitute the plot. Grips you to the edge of your chair / sofa, keeping you in the element and springing twists that you can't imagine. There is mixture of science, parapsychology, medical field, crime fighting and above all abilities that human mind can't detect in the plot. Well written by the author as usual and certainly an easy read for not so weak minds. :) If you get to come across the book, do pick it up for a unique adventure.

1) Quite a few novels of Yandamuri have been made into movies. And interestingly enough most had Chiranjeevi in the lead role and some had others like Venkatesh and Nagarjuna in the lead roles. Check here for the list. However most popular ones are Aakhari Poratam, Abhilasha, Challenge, Oka Radha Iddaru Krishnulu and others.
2) Second-show is a late night show for movies in India that starts at 9:00pm.
3) In one of the stories, the author talks about a parapsychology based book Behind The Iron Curtain. I could not find anything about it. Perhaps it’s a fictious book for this ficiton.
4) Factual Errors: On Pg 76 the author talks about the arteries that send blood to brain and he mentions one of them as Carotic Artery, but it is Carotid Artery.
5) The author brings the characters from his previous novel Abhilasha ( = Desire). One of the characters Vaijayanthi goes to meet Chiranjeevi - the lead character from that plot - at his home for an interview. She meets there his wife Dr. Archana - again the lead character from that plot. Abilasha was made into a super hit Telugu film in 1983 starring Chiranjeevi and Radhika on the lead roles. More about the film here.. A look into the life of these characters after the book / movie ended is shown here.
Tags: birthdays, books, celebrations, critique by amateur, family, reviews
Subscribe