Stars: 3.5 / 5
Recommendation: Want a thriller? You will get one with this…not bone-deep as usual but nonetheless a good one. If you are into murders and especially dig on solving cold cases, this is one series you do not want to miss.

The Cinderella Murder is a thriller by Mary Higgins Clark published in November of 2014. This is the second book in the Under Suspicion Series continuing to follow the lives of Laurie Moran, Timmy Moran, Alex Buckley and Leo Farley. Mary Higgins Clark collaborated with Alafair Bruke for this series forming another strong set of books from this bond. 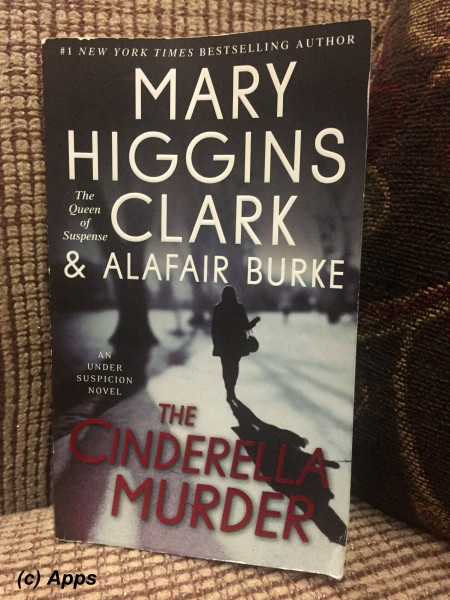 Laurie Moran's reality drama Under Suspicion has become a super-hit after the first episode that solved a twenty year old murder. (Check my review of I've Got You Under My Skin, the first book in the series here: <post link>). This show unlike a news episode or a crime series, brings in the real people of the crime, interviewing them in the hopes to find clues that may or may not solve the case. With Alex Buckley, who is closely becoming her romantic interest, as the host of the series, Laurie is taking up another cold case for her next episode. This time it is the shocking murder of beautiful and brilliant Susan Dempsey, a UCLA student and belonging to an elite family in California. The murder was dubbed as The Cinderella Murder because of the missing shoe at the crime scene. Will Laurie and Alex together solve this case through the episode like before or will it be just another episode as in the famed TV show Unsolved Mysteries - we have to wait and read the book to get the answers. :P

Susan Dempsey was 19 year old, aspiring artist, UCLA student and  daughter of Jack and Rosemary Dempsey - Jack being head of legal department for Valley Tech one of the top research companies in the country - when she was murdered 20 years ago. She was supposed to come home to her parent's home in Northern California for Jack's sixtieth birthday party but called in last minute to tell her mother that she was going in for an audition for one of Frank Parker's upcoming movie. Only that she turned up dead in Laurel Canyon Park, south of Mulholland Drive in  Hollywood Hills, the following morning appeared to be strangled. And the case went cold very fast and now it has come to Laurie for her Under Suspicion series. Jack Dempsey had passed away three years ago, and Susan has given her agreement to have the case brought into the reality show if they promised to treat Susan's memory with respect. The press had dubbed the murder as The Cinderella Murder as Susan was wearing only one show when her body was discovered. Who had murdered Susan? What was the reason for it?

As Laurie and her team geared up to call up the family and friends closes to Susan at the time of murder, she does have a problems with getting them ready. For instance, Frank Parker, now famous Hollywood director, was the last person to see Susan alive, has his own reservations to be on the show. Susan's agent Edwin Lange had passed away so the connection between Susan and Frank weakens a bit. The other folks she wanted on the show were - Keith Ratner (Susan's boyfriend then and who had been despised by Rosemary) and Madison Meyer and Nicole Melling aka Nicole Hunter (Susan's college roommates).

A few persons of interest for Laurie were - Lydia Lewitt (nosey but helpful neighbor of Rosemary), Gavin Melling (Nicole's husband), Talia Parker (Frank Parker's wife of ten years), Martin Collins (Founder of Advocates of God aka AG, a freedom church), Steve Roman (one of the associates of AG looking over the Bay Area region), Dwight Cook (founder of REACH, an online search engine, and a friend of Susan in college) and Richard Hathaway (professor at Susan's college when she was studying then). Other key folks in Laurie's life that are part of her life both in professional and personal bases - Grace Garcia (Laurie's assistant), Jerry Klein (Laurie's assistant producer) and Brett Young (Laurie's boss).

There are histories beyond these each of the characters that they don’t want to come out into light, especially for the time period that Susan was murdered. What is Nicole hiding? What is it that would come out if dug deep? Was the alibi that Madison provided for Frank landed her the role that Susan was supposed to get? What is history between Frank and Madison? Keith and Madison had dallied together while Keith was dating Susan. Had that come out? Had Madison hurt Susan impulsively because of that? Or did Keith do the honors because Susan did not want to be with him anymore?

As the program preparation progresses with initial interviews setup and ready for the Summit Meeting, things don’t seem as simple as just solving a murder. Dealing with the family and friends of Susan, uncovering their secrets and hidden agendas, tapping into Advocate of Gods mission and finally getting all facts right from fiction, it's a lot more than what Laurie had originally planned for. But is she and her crew safe? Was Leo right about his apprehensions? How will all this finally end at the Summit meeting? Who killed Susan Dempsey?

Another well written plot by the famed author, albeit it’s a collaboration that definitely proved successful. As always her plots are woven well and tied in neatly without revealing the culprit until the last few chapters. Sometimes I am able to figure out. But this time around there were so many possibilities that it was hard to determine for me. Interesting plot, and ending with a happy feeling of solving the murder. Although I would have wished to see a bit more romance between Laurie and Alex, also a little more role for Alex. I always wondered what happens to the main characters after the novel ends. So it was a nice to see the continuation of the characters' lives through a series. Although not all books in a series I like or sometimes the series itself I may not like, this one in particular was certainly appealing enough for me to continue.

If you are into murders and especially dig on solving cold cases, this is one series you do not want to miss.  Looking forward to read the remaining books in the series.

1) Unsolved Mysteries was a reality TV show hosted by Robert Stack and aired during 1987 and 2002 and later by Dennis Farina between 2008 and 2010. It aired real cold cases of missing persons or murders and asked viewers to help for any information in solving them. More about the show here.
2) Sights in NYC that I didn’t know about and adding to my list to see: Channel Gardens near Rockefeller Center
3) One of the character in the book, Nicole Melling, talks about a song "Little Boxes on the hillside" when she passes small houses on the hillside of I-280 in Bay Area. The lines sounded interesting so I searched for it and lo and behold, that song indeed exists. It was a song written and composed by Malvina Reynolds in 1962, and was a hit for Pete Seeger in 1963 and a theme song for the 2005 Showtime TV Series Weeds. (More about it here) Lyrics can be found here. Here is a video of him singing on a TV show

4) The author mentions about a tech company called REACH that is basically a search engine used to search information on internet. I thought she was talking about Google but not using the name as such. However, she does mentions some of the characters using Google for their work. I wonder if REACH is a search engine or just a search website similar to all those real estate or travel or ticketing websites.

5) I didn’t think there is a website for real named "Who's Dated Who". Surprise Surprise there is indeed such a site. Check it out here.
Tags: books, critique by amateur, murder, mystery, reviews, under suspicion
Subscribe