Murder On Parade is the 29th book in the Murder, She Wrote series by Donald Bain and fictional writer Jessica Fletcher based on the popular TV Show of the same name. The book was published in March of 2009. The time around the plot is set again in Jessica's home town of Cabot Cove, Maine. 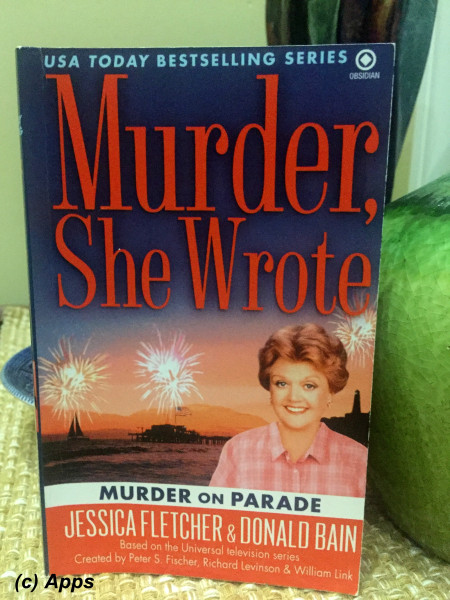 The people of Cabot Cove are geared up to their annual Fourth of July Celebrations. However the entire planning has been usurped by the town's newest resident and corporate mogul Joseph "Joe" Lennon of Lennon-Diversified, Ltd. And he is funding the entire celebrations. Although in the beginning the town planning committee had welcomed his offer, as days proceeded, Lennon has been becoming more condescending, dictatorial than being part of the planning, much to the disappointment and angst of the committee. There have been voices raised against Lennon's involvement, in particular by Chester Carlisle although everyone have been thinking that Chester is slowly losing it lately. And the new Dr. Warren Boyle and his constant advertising of the new medical methods is causing Seth to lose his patients and also be branded as a bit senile. Jessica hurts for Seth and tries her best to cheer him up.

One evening when Seth, Jessica and FBI agent Rick Alcott were coming out of a restaurant after dinner, they are attacked by a mugger and Seth gets injured in the process. But, was it a mugging gone bad? Or an attempt on one of their lives gone bad? And then the night of fourth of July, they find Joe Lennon shot to death in the back of the Lennon-Diversified. Who had killed him? What is the motive? He did not make many friends in Cabot Cove either. But then his homefront didn’t have any friend either. Was his son Paul had a motive, for he was constantly rubbed at by Joe? What about Cynthia? She chose a lot to lose with the decisions Joe made recently. Or the loud mouth and strong opponent Chester? Did he kill Joe in the spur of the moment, unable to control his rage? What a timely arrival of both Amos and Rick, both retired law enforcement officers, in town when the murder of a high-profile person occurs. Coincidence? Or a hidden purpose behind?

As the plot proceeds we get introduced to a myriad of characters just like in other plots - Dr. Warren Boyle (physician at Lennon-Diversified, Ltd. Who had a penchant to get his patients go through all kinds of tests f necessary or not), Kathy and Wilimena Copeland (You might remember them from the previous book "Panning for Murder" where Jessica and Katy embark on a cruise to find Willie. My review of the book here), Cynthia Welch (Vice-president of strategic planning and marketing at Lennon-Diversified), Dante (one of the executives from Lennon-Diversified working with Cynthia Welch), Robin Stockdale (drama teacher at the high school), Josie Lennon (24-year old daughter of Joseph Lennon and an aspiring actress), Paul Lennon (Joseph Lennon's son), Richard "Rick" Alcott (Retired FBI agent visiting Cabot Cove) and Denise Lennon (Joe Lennon's wife).

Another decent mystery that keeps you on the edge and definitely makes you want to know who the killer is.

1) Amos Tupper, the retired Sherriff of Cabot Cove makes an appearance in this book. I always wondered if the author would bring back old characters from the TV series that don’t occur in books anymore. There you go, he brought in one now. :)
2) Jessica laments about communication through emails distorting the language and the method. How so true. I felt the same when communication through texting started, what with the abbreviated words, emojis and mis-spelt words. It used to irritate the heck out of me. I totally get her sentiment.
3) Grucci Fireworks are planned to be used by Joseph Lennon in the book. They are told to be the ones used for Olympics, White House events and other bigger ones. Whoa!
4) Grammatical Errors Seen - Pg 15 Para 2 last but one line a missing "to" right before "left" in the statement "allegedly left her by...".
5) There is a mention of Twelve Angry Men movie in the book. I had been meaning to watch this movie for quite some time. I might as well do it now for these reviews. :)
6) Cabot Cove's lobsterfest is also mentioned in the book. The author had written a murder mystery around that festival in the 23rd Book Maine Mutiny. Check my review of hat book here
7) Another novel Catch-22 is mentioned in the plot. It is written by Joseph Heller and seems to be a military plot. Havent read it before…Must try to get to it sometime in future. :)
Tags: books, critique by amateur, murder she wrote, reviews
Subscribe