A Question Of Murder is the 25th book in the Murder, She Wrote series by Donald Bain and fictional writer Jessica Fletcher based on the popular TV Show of the same name. The book was published in April of 2006. 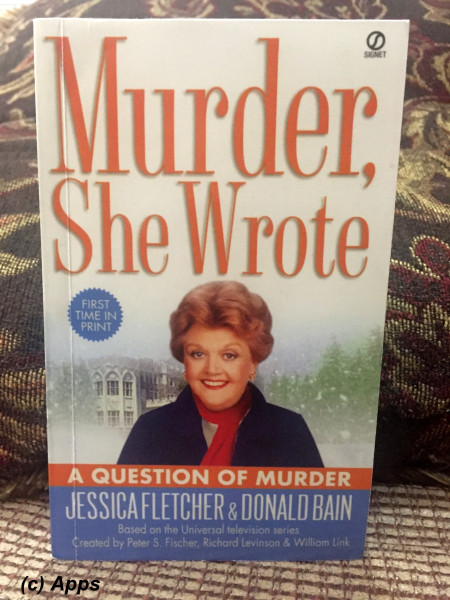 Jessica Fletcher is at Mohawk House - a historic 200 year old house converted to a resort and one haunted - in the foothills of Berkshires attending a mystery writers conference and also to be part of a mystery performed by the Savoys. Lawrence "Larry" Savoy and Melinda Savoy have had run this theatrical company for a long time with performances of their murder-mystery shows everywhere. And now they are performing here and the guests are expected to participate in solving the murder on stage. As part of the performance the authors on the panel are supposed to come up with questions that are asked to the guests and if answered right adds to their score. Jessica had her share of questions with which she is ready. As the plot continues and sticking to the theme, when Savoy's actors perform one of them gets indeed killed for real - the obnoxious Paul. Who wanted Paul dead? What was the tension that lay under the actors demeanor felt by Jessica? What is the reason behind it?

Then Laura, in charge of costume and props vehemently opposes to the Savoys and others when it was suggested that the show must go on, especially that they are all stuck on the mountain in a blizzard. Why is she so hurtful about Paul's death? What is her relationship with Paul? As Jessica is thinking on these lines, she finds out that Claudette Chasseur had been an actor before marrying John Chasseur, who is an abusive husband. The plot thickens as a supposedly ghostly appearance of the dead Paul is seen by one of the authors. Jessica continues to dig into the mystery and aiding Detective Ladd, the real one from the police. In the end will she solve both the real crime as well as the staged one that the Savoys have set for the weekend?

The actors in the company are Cynthia (playing the daughter), Paul Brody (a B movie actor, playing the role of Cynthia's beau), Monroe Whittaker and Victoria Whittaker (playing the roles of father and mother respectively to Cynthia), Catarina (playing the role of a maid) and Miss Carlisle (Red-head among the guests). The authors visiting for the conference are Jessica Fletcher (which you all know already), John Chasseur and his wife Claudette and finally GSB Wick and her companion Harold Boynton. GSB Wick seems to be mysterious about her initials although she is called "Georgie" by her companion Harold. Other characters in the plot are Mark Egmon (Event Manager at the hotel), Jeremy (lead stage hand), Jody (one of the college-going waitresses), Laura Tehaar (in charge of props and costumes) and Sydney Pomerantz and his wife (guests at the hotel).

Every chapter began with a question about mystery novels and writers. Since the theme of the plot was a murder-mystery party the questions made the reader feel a part of the plot than just a reader. As always I could identify who the killer could potentially be when I was mid-way through the book. However there was a surprising twist in the end even though I was partially correct. Another light reading murder mystery that I enjoyed thoroughly.

1) Some interesting choice of words used: inglenook (meaning a space on either side of a large fireplace), vapid (to mean to offer nothing that is stimulating or challenging), erasure (meaning removal of recorded data or information).
2) Grammatical Errors seen: Pg. 79 Para 1 third line - I believe the word should be "consider" rather than "considerate".
Tags: books, critique by amateur, murder she wrote, reviews
Subscribe