Stars:  3 / 5
Recommendation: Easy and simple reads that take you to a fantasy world far, far away or may be right next to you but unseen. Except for the fact that the ghost can do more than expected.

Once Upon A Castle is a collection of four novellas by famed romantic authors - Nora Roberts, Jill Gregory, Ruth Ryan Langan and Marianne Willman - published in March of 1998. The third novella is titled Falcon's Lair and written by Ruth Ryan Langan. I had been reading a few non-fiction and lengthy fictions past few weeks so I wanted to pick an easy book this time. Hence this novella. Here's the review on the third story in the collection. 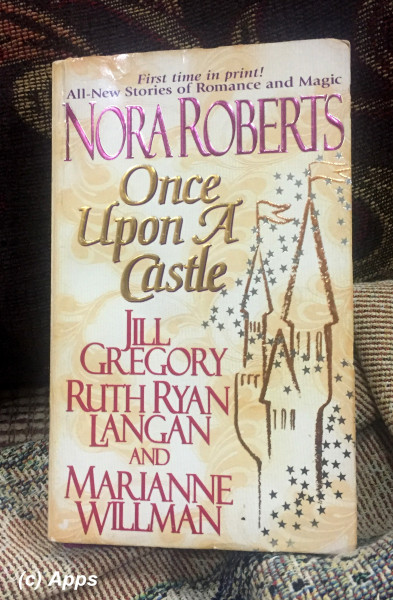 The plot opens with a brief conversation from years ago, precisely in 1870 England, a plotting being made to eliminate a certain American. Then it moves to a time little later than the incident into the life of one Felicity Andrews, who had now reached England from America by way of water at the summons of her father's oldest and dearest friend Oliver - Lord Falcon. A letter describing about something mysterious, dark and too painful. However her father had died before he could respond to Lord Falcon, hence Felicity was on her way to visit him in her father's stead. As she travelled in her coach towards Lord Falcon's castle aptly titled Falcon's Lair, she glimpses a cloaked-rider almost coming on to their path and disappears at the last moment. Although the rider's face gets etched into Felicity's memory, she wondered who that rider was and where had he disappeared to.

Weary and tired she reaches Falcon's Lair finally. Only to be received chilly by Maud Atherton, the housekeeper, who puts her in a small cramped room for the night at least. Later in the night she sees the same rider in her room who had entered without sound or sight. Who amuses himself by scaring her at first and then proclaiming himself to be Lord of the manor and then finally disappears again. Only a Falcon perches on her window and flies away just like before. Who is he? Why could she feel his body heat or see him while others couldn’t? She finds out next day that the stranger who visited her last night was Gareth the First Lord of Falcon's Lair. And what did he mean that she was the Key? Upon meeting the Lord Falcon - who most of the times rested in is bed - she comes to know of a family curse that the Falcon men have been enduring generation after generation. What is the curse? What is the need Lord Falcon had of Felicity's father Robert? Why was someone trying to hurt her? What is it that Lord Falcon wanted her father to help him with?

Thus takes us through the plot set a long-time ago since now when Felicity struggles to get Lord Falcon some answers and at the same time bargain her heart with Gareth - one who lives and doesn’t live. It's certainly an easy read and a good plot except for the part that the ghost makes love - actually it is outright creepy. I believe there are spirits and ghosts, but beyond that if someone says they can touch, feel or do things, it gives me shivers.

All in all a refreshing and smooth plot for those fast readers and readers who have less time at their hands.
Tags: books, critique by amateur, once upon a castle, reviews
Subscribe